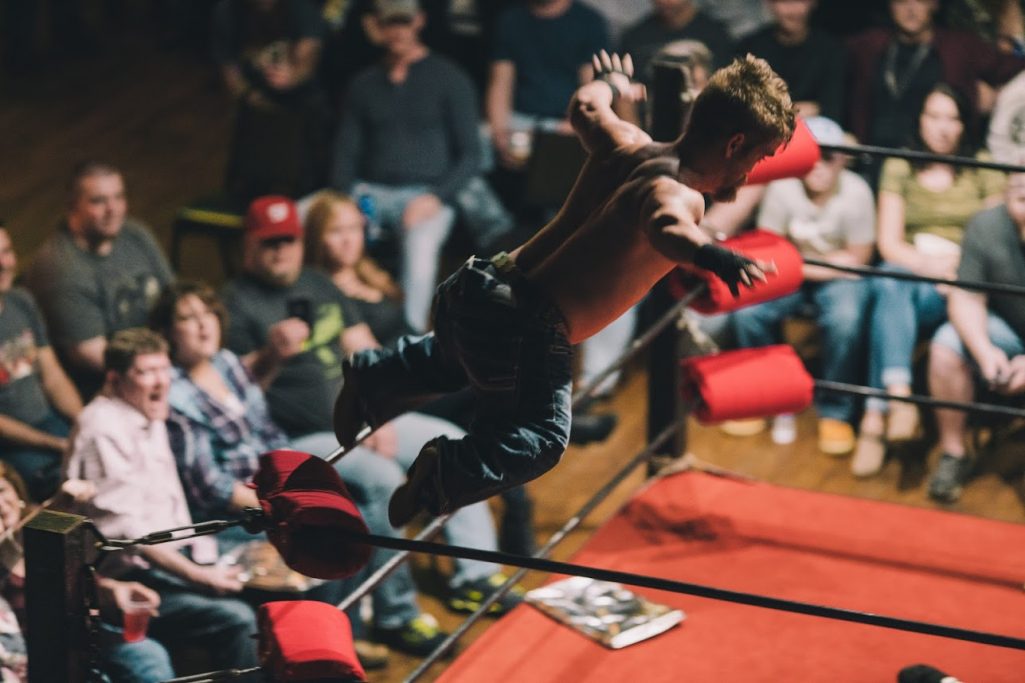 Ringside at “Extreme Midget Wrestling: The Baddest Lil Show on Earth” in Lynchburg

Reluctant at first, I soon found myself completely captivated by an event called “Extreme Midget Wrestling” in Lynchburg last month. To be clear, I’m uncomfortable with the word midget, which I understand is offensive; ordinarily deferring to the Associated Press nomenclature of “little people”. Yet into this world of potential exploitation, I went. For starters, I’m not even a wrestling fan, only being familiar with attending a few matches as a child with my dad.

Despite my reluctance, something about the Facebook advertisement for this match was compelling. Perhaps it was the words, “Extreme Midget Wrestling- Baddest Lil’ Show on Earth”, flanked by images of barbed wire and flames? Nonetheless, I knew I had to go and learn for myself to see if this was sheer spectacle or literally the “Baddest Lil’ Show On Earth.”

The wrestling match was at a nightclub called Phase 2, which also just happened to be in my hometown, making me anxious as I walked into the venue.

The room was huge, but I managed to find a place to sit near the bar so I could watch this “extreme event” unfold. It seemed everybody was wearing the same plaid shirt, the same cowboy boots, and drinking the same brand of watered down beer – only adding to the ambiance – of what seemed to be the only interesting event to ever take place in the city of Lynchburg.

Before too long the announcer took to the mic, “This is a sporting event, so we will all rise and remove our hats for the national anthem,” before introducing the first two wrestlers. In fairness, I wasn’t about to take a knee in front of a sea of Bud Light chugging patriots, so I removed my hat and looked for the flag. Unbeknownst to me (and everyone else in the room) there was no flag, so we all just stared off into the distance and hummed until it was over.

Soon it was time for the main event: And at Extreme Midget Wrestling, each wrestler comes out to their own theme music. While this is a pretty common thing for any kind of professional wrestling setting, the music doesn’t stop at the introduction. In fact, the music played throughout the duration of every single match making it near impossible to hear the announcer for any of the actual event. Regardless, everybody else in the room seemed to be enjoying the techno remixes of Drowning Pool and hick-hop songs, so I guess they got what they paid for – at Extreme Midget Wrestling they definitely know how to please their audience.

The first match was a 30-minute brawl between a man in a luchador mask and another guy dressed like a cross between a lumberjack and a construction worker. I would have been able to credit them by name, but it was impossible to hear over the music and raucous sold-out crowd.  Momentum swung back and forth between the wrestlers for the majority of the match and the champions wasted no time bringing extra weapons into the ring. But in the end, the luchador ended up victorious by mounting a major comeback towards the end of the match. Neither ended the night there, and both made multiple appearances later in the event.

Having little people wrestling in a tiny ring seems like it could be potentially demeaning, but the athleticism of the wrestlers had everybody in the room absolutely captivated. By the latter half of the evening, people were cheering the wrestlers on like they were witnessing such legends as Ric Flair, Ricky the Dragon Steamboat, and The Rock in their prime.

Even in a chaotically packed room full of drunk people watching little people beat the shit out of each other with trash cans, there wasn’t a speck of negativity in the crowd. When one of the wrestlers came out to Chicken Fried by the Zach Brown Band, the crowd sang along in commaredrie and spirit, just like they were at any other sporting event. Whether it was a result of the beer, little people doing flips, or a mix of all three everybody was fucking stoked by the time the final match took place.

Extreme Midget Wrestling is a crazy thing, but a thing nonetheless. Even if it is a little choreographed, it’s absolutely bananas to see people of any size jumping off of ladders and turnbuckles onto one another. I’m not sure if I’ll be going the next time Extreme Midget Wrestling comes to town, but if you’re into wrestling and cheap beer, I definitely recommend attending. These little people can do anything you’ve seen another wrestler do and they can do it even better. 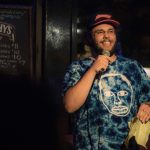 Mitchell Paige is a graphic artist, aspiring comedian, and writer with a focus on not putting all his eggs in the same basket. Mitch frequently vists the city; you can catch him participating in open mics around town or covering events here in RVA, Lynchburg, and Charlottesville.