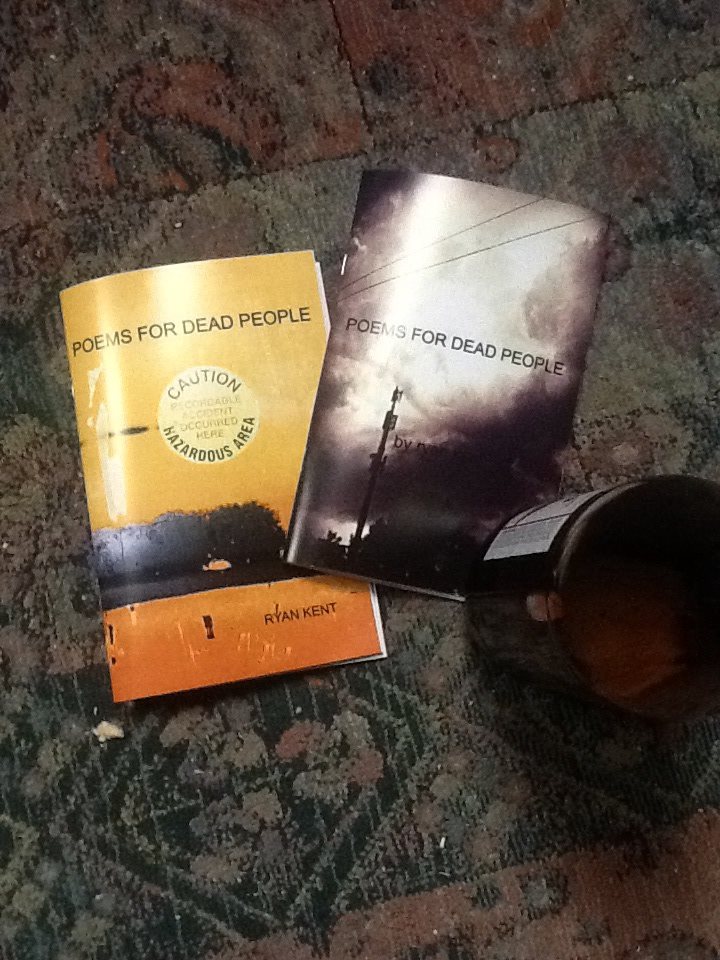 Ryan Kent is a poet, which makes sense because he’s probably better known around this town as a singer. The lyrics he writes for his band, Gritter, are probably similar to a lot of lyrics, in that if you separated them from the music and wrote them down on a piece of paper, they’d look just like poetry. But Kent has more to say than what can easily be set to a metal riff and a pounding backbeat.

Ryan Kent is a poet, which makes sense because he’s probably better known around this town as a singer. The lyrics he writes for his band, Gritter, are probably similar to a lot of lyrics, in that if you separated them from the music and wrote them down on a piece of paper, they’d look just like poetry. But Kent has more to say than what can easily be set to a metal riff and a pounding backbeat. Now, in the tradition of other singers of heavy music (Henry Rollins, Oxbow’s Eugene S. Robinson), he’s turned to the written word as an additional outlet for his innermost thoughts.

If his first book, Poems For Dead People, is any indication, Ryan Kent thinks a lot about death. But really, don’t we all? In 2014, when social media, Netflix, and the constant demand for more content from news outlets of every stripe bring us in contact with death on an extremely frequent basis, it’s hard not to think about life and death all the time. In Poems For Dead People, Kent writes about all sorts of people, from family members and friends who have passed on to the sorts of famous-but-not-legendary types whose death notices are the first time you’ve thought about them in five years or more. Kent only hints at the identities of the people he’s writing about, and sometimes you can tell he’s writing about someone famous but can’t quite figure out who they are. I was baffled by “Where Would You Like Me To Stand?” in which Kent says, “I don’t know a single person still/breathing that doesn’t know who you were.” He’s probably right, but there weren’t enough clues in the poem for me to figure it out.

This instinct to try to guess who he was writing about with every new poem was one I never quite managed to shake at any point during my reading, but it was a source of frustration to me even though I could never turn it off. The insights available in these poems can sometimes be obscured by too much thought devoted to identifying the minor details that show up at the ends of a few lines, and that’s a shame. Regardless of whether Kent is writing about his great uncle or the long-deceased original guitarist for the Gin Blossoms, he’s got something worthwhile to impart to you, the reader, and it’s best to focus your attention on what he’s saying so that you get the point. If the subjects of the poems were really the most important thing, he’d name the poems after them. There’s a deeper point here.

Sometimes this deeper point comes through in the way that the poems, always addressed to the dead person that is ostensibly the subject, barely ever even mention that person. One of my favorites in the book is “Nembutal,” which is almost certainly about Marilyn Monroe. Monroe exists in the poem only as a poster above the bed of one of Kent’s early sex partners; what he’s really writing about here is his own lingering guilt over his conduct in that long-ago relationship. “Most men loved you more than their wives,” he says of Monroe at one point, and this is true at face value, but this detail’s resonance with the circumstances being related here can’t be ignored. Later in the poem, Kent addresses Monroe’s image in the poster:

We’d look at each other the same each time.
It felt like you were cheering me on.
I refused to look at you afterwards.
We both knew I was rotten.

In “Nembutal,” Kent gives the poem its power by detailing his own emotions. More often, though, the poems in this book hit you the hardest when he leaves his feelings out, and instead just tells you what happened. He has an eye for which details to include, and how to describe them in a way that the way he feels about them come through without any explanation being necessary. “Hole In A window,” one of the earliest poems in the book, is an effective demonstration of this technique, as the final few lines of a poem that matter-of-factly tells the life story of a man with mental problems draws to a conclusion that hits like a gut punch.

Then they let you out and you got arrested
some more and did more time, moved in to live
with your aunt and then made the Hajj to Mecca
a few years before a couple of waiters beat you
to death and left you there, bleeding in the street, in
Mexico City last year over money and bullshit.
It shouldn’t be like that but it is.

The final line of “Hole In A Window” is the only time we get a hint of how Kent feels about the situation, and it’s just about the simplest and least poetic description of a feeling possible. And yet it works better than a more flowery conclusion ever could have.

Ryan Kent reads from Poems For Dead People on WRIR, accompanied by Anthony Curtis on guitar

If there’s any problem with Poems For Dead People as a whole, it’s that these gut punch conclusions, generally so effective in isolation, are a bit blunted in their impact when grouped together like this. Kent has a habit of making the final few lines of a poem shorter and simpler than the rest of the poem has been, and once you’ve seen it a dozen times in the space of 15 or 20 poems, it becomes a bit too predictable. Since they were originally published in isolation, it makes sense that a technique that worked well when readers were just getting one poem at a time might have a different effect en masse, and really, this is a minor quibble at best. If you read the last three or four lines of most of these poems quickly enough, it won’t jump out at you too much.

And it’s not like you’ll be able to stop yourself from blasting right through this collection regardless. Poems For Dead People has a foreboding, inexorable momentum, almost like life as it bears all of us along to the grave. This is a book for those early-morning moments, when you find yourself staring out of your kitchen window just before you leave for work, thinking, “Am I wasting my life?” Decide now, and act on that decision, because death will be here sooner than you expect.