Sexual Harassment: Politicians, Media, and the Unjustifiable Difference Between Them - RVA Mag 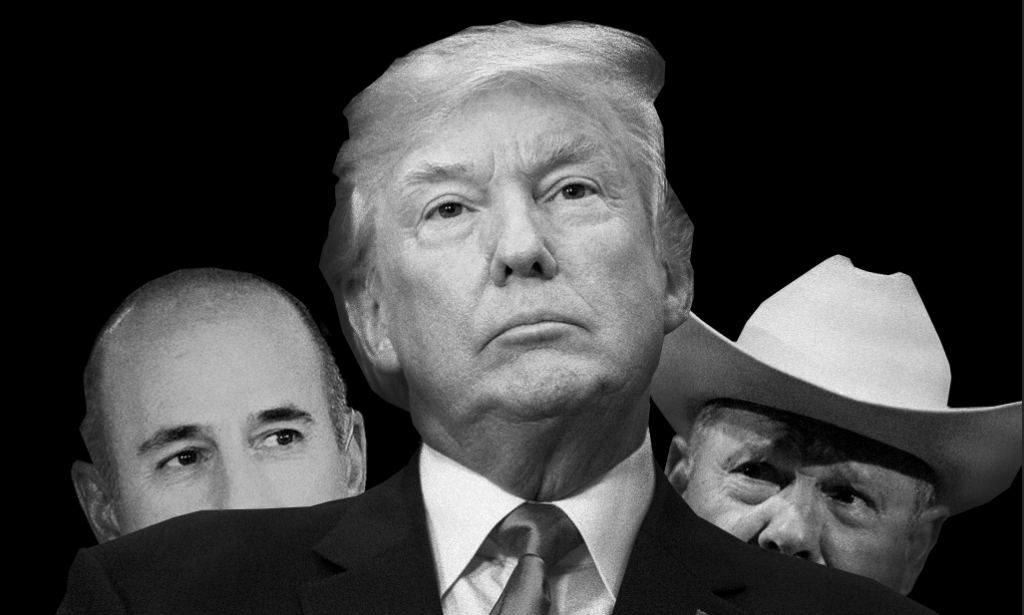 Rep. Conyers is facing pressure from Democratic leadership behind closed doors, but he continues to vigorously deny the accusations – although he admitted to paying a former staffer with taxpayer money after she accused him of sexual harassment.  On Thursday, one of Conyers’ accusers, Marion Brown, went on the Today Show to discuss the allegations. She said he “violated her body” and frequently propositioned her for sex.

Almost every Republican leader in government – with the exception of their leader, Trump – has denounced Moore for pursuing underage girls.  However, he still remains active on the campaign trail and shows no sign of bowing out. Franken has apologized for his mistakes after photos surfaced of him groping a woman while she was sleeping. However, he shows no signs that he believes he should resign. Trump was recorded on tape saying that he grabs women by the “pu**y” because he is famous and they let him do it.  The other participant in that tape, Billy Bush, was fired by NBC News for what he contributed to that tape.

Sixteen women have now accused Donald Trump of sexual assault. He was elected President of the United States within a few months of this information coming to light, while at the same time making Bill Clinton’s sexual misconduct a constant topic of coverage during the election.

Washington has long had a history of politicians playing sexual scandal situations close to the vest. The Congressional Accountability Act of 1995 made that much easier for them. Originally, it was intended to force members of Congress to be held to the same standards as the rest of the professional world.  Instead, it created a way for sexual harassment cases to be settled using taxpayer money – with the process and participants of the settlement being kept a complete secret. Not to mention the first step that an accuser takes under this act after is to take a 90-day “mandatory dispute resolution process.” Which essentially is a “cooling off” period where the accuser has to continue to work and interact with the accused.

17 million dollars in taxpayer-funded settlements have occurred under this resolution since 1997. The Office of Compliance handles these funds. They say that the fund covers most Capitol Hill employers, so not all of these funds are used for lawmakers’ transgressions.

This is drastically different than the process that we have witnessed taking place in the private sector. Matt Lauer’s employers were notified of a complaint against him on Monday night, and he was released from his position at NBC less than 48 hours later. Later on Wednesday, we learned from Variety, who claimed to have been working on this story for months, that Lauer had been committing inappropriate acts for years. From having a button on his desk to lock his office door, to gifting a coworker a sex toy and letting her know how he wanted to use it with her. Louis C.K.’s film company canceled his next movie premiere and multiple media companies cut ties with him after his transgressions hit the news. CBS, Bloomberg, and PBS released Charlie Rose within a day of his accusations going public.

Yet the disparities between politicians and media personalities continue to persist, even with an announcement by Northern Virginia Congresswoman Barbara Comstock. On Wednesday, the House of Representatives passed an anti-harassment resolution that the Congresswoman introduced. The bill requires Representatives to participate in yearly sexual harassment training.

This is surely a step in the right direction, but forcing members to participate in a yearly training does very little to address the actual harassment that has occurred. These resolutions also don’t address the biggest possible offender of all – the President.

The media, tech moguls, Hollywood producers, comedians, and athletes are typically forced to pay for their transgressions themselves. If not with their own funds, it’s the employers they worked for that enabled their behavior. This is also usually accompanied by a pink slip from that enabler.

Politicians have been using taxpayer money to pay off their accusers under a code of silence enacted by themselves, or their predecessors for over 20 years.  As a result, lawmaker’s are allowed to push their moral beliefs and judgment’s into our law books – but they don’t hold themselves accountable to that same standard.  Why should citizens trust them to police themselves? Citizens should be able to trust that the individuals elected to run our country truly have the interests and safety of their citizens at heart. That is getting harder and harder to believe, more so since the revelations that they will cover up the mistreatment of women to the tune of tens of millions of dollars. The citizens that are being publicly shamed and losing their jobs deserve every ounce of this.

So the question remains, why aren’t our elected leaders receiving the same ridicule and justice?