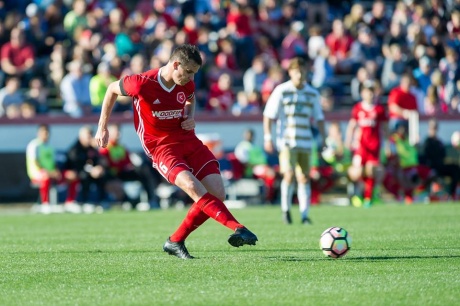 RICHMOND, VA – (Thursday, April 13, 2017) – The Richmond Kickers return to City Stadium this Saturday, April 15 to host Ottawa Fury FC at 5:00 p.m. Happy Hour starts at 3:30pm with food and drinks specials before kickoff, live music by 2-11 and over a dozen craft beers on tap. Happy Hour tickets are on sale now at RichmondKickers.com for $30 and include admission for two, drink tickets and a limited-edition Kickers growler.

The Kickers return to City Stadium this Saturday after suffering their second straight 1-0 loss at the hands of Louisville City FC. The majority of the match remained scoreless until an 80th minute corner led to two shots from Mark Anthony-Kaye, the second hitting the hand of Christopher Durkin as he twisted in the air. Former Kickers midfielder George Davis IV slotted the resulting penalty into the bottom right of Eric Klenofsky’s net to steal all three points.

Meanwhile, Ottawa also dropped a 1-0 decision for the second time this season, falling against the best team in the USL Eastern Conference, Tampa Bay Rowdies. Georgi Hristov headed in the decisive goal in the 47th minute and the Fury could not recover from the early goal.

Saturday’s match opens a two-game series between the two teams, and they will swap home-field advantage on May 27 at TD Place Stadium. Following this weekend’s game, the Kickers remain at City Stadium to host the Pittsburgh Riverhounds on Saturday, April 22.

Players to Watch:
Kickers: Defender Mallan Roberts (#15) has started in all three matches for the Kickers and was Richmond’s most involved player on April 8 with 81 touches and 63 passes. The Edmonton native, by way of Freetown, Sierra Leone, is in his first season with Richmond after a loan spell with Ottawa during his first professional season with FC Edmonton. Defender Maxim Tissot (#33) has also started all three matches, and was very involved in the last game with 77 touches and 47 passes. Also a Canadian national and former Ottawa Fury player, Tissot scored two goals in 19 appearances for the Fury last season. Kickers’ youth graduate and defensive midfielder Chris Durkin (#21) has blocked several shots this season and has been integral on both sides of the ball in all three games, on loan from the club’s official MLS affiliate D.C. United. The Glen Allen, Virginia native is the youngest Homegrown player in D.C. United history, making his debut as a 16 year-old last June.

Fury: Midfielder José Seoane (#11) is tied for the team lead with three shots including two on target on April 8. The 29-year old Floridian scored two goals last season in 20 appearances for Icelandic side Fylkir and has also spent time with IBV and the Austin Aztex. Defender Onua Obasi (#14) was Ottawa’s most involved player on Saturday with 58 touches and 40 passes. He also led the team with four tackles and thirteen possessions gained while anchoring a defense that allowed just the one goal. Obasi is a versatile player that can play left back, center back, and defensive midfielder. Forward Steevan Dos Santos (#8) also had three shots on April 8 and scored 17 goals in 48 appearances over two seasons with the Rochester Rhinos before signing with Ottawa. The Cape Verde native has also spent time with hometown club CS Mindelense, Norwegian side Ullensaker/Kisa IL and Angola’s Progresso.

Amy David was the Web Editor for RVAMag.com from May 2015 until September 2018. She covered craft beer, food, music, art and more. She's been a journalist since 2010 and attended Radford University. She enjoys dogs, beer, tacos, and Bob's Burgers references.
Topics: community, Richmond kickers, RVA soccer