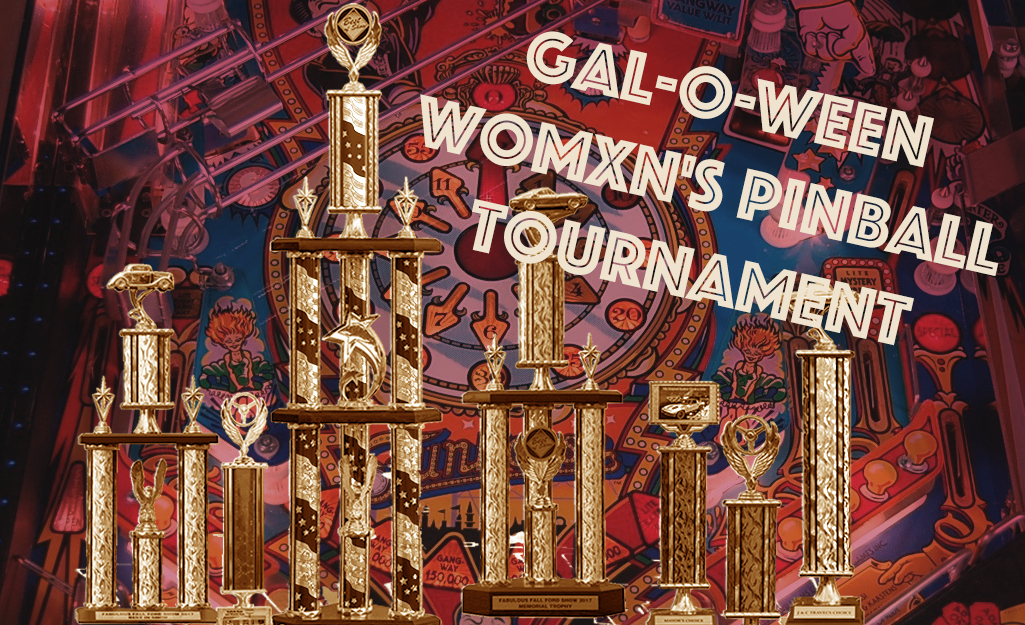 This all Women’s Pinball Tournament in Richmond brought the Heat

The world loves an underdog story — and IPAs, White Claws, and costumes. Oh, and also pinball.

The Richmond Pinball Collective, a non-profit social club, held their first Gal-O-Ween Women’s Pinball Tournament this weekend with players coming from all over the Commonwealth. Also in attendance were members of the Richmond chapter of Belles & Chimes, an international network of women’s pinball leagues. Most players were there to win, some were there to support their league’s event, and others had no idea what they were getting themselves into.

Enter Maya Leyden: a junior and physics major at the College of William and Mary — and an underdog contender for Gal-O-Ween. RVA Mag followed Leyden on her quest to win this pinball tournament, but what became clear was that neither of us really had any idea what to expect. Pinball is just a game for fun, right? Figuring she’d just play a couple of rounds and call it a day, we entered the tournament area.

Walking into the Richmond Pinball Collective, Leyden was greeted by Laura Fraley, the club’s president. Standing beside her was the club’s vice president, Clark Fraley, dressed in a pink dragon onesie (amazing). The walls of the Pinball Collective were a deep purple, and lined entirely with pinball machines; sitting conspicuously on the counter were three trophies.

“There are trophies? I want one,” said Leyden, determined. We both laughed — Leyden had ever thought about winning a pinball trophy before. Today was her day. 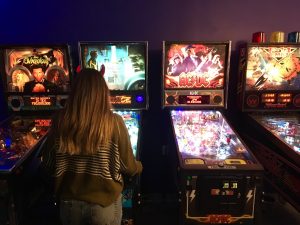 Bringing the Heat at Gal-O-Ween

The stakes in this tournament vary in degree depending on who you are. If you’re a serious competitor, you’re there to rack up points for your World Pinball Player Rankings (WPPRs). Since this tournament was for women only, the points count toward the players’ women’s world rankings only. The International Flipper Pinball Association has a player-ranking system for competitive pinball players, with co-ed tournaments awarding regular WPPRs. Fraley, for example, has placed at number eight in an international tournament, and gets ranked accordingly.

Leyden’s penchant for the game spurs from her father’s love of pinball, and from having two machines in their basement. She knew there were professional pinball players, but didn’t exactly know the extent of the culture surrounding the game — or of that people came just to be spectators and cheer on the tournaments.

Players bought beer from the selection of IPAs and White Claws behind the counter. The turnout for this tournament was much higher than expected.

“I was thinking 15-20 people,” said Fraley. “We ended up with 24, and that’s about the size of a men and women’s tournament.” Originally stressing about the attendance and event planning, it all paid off in the end. “This is all women in pinball…and I’m melting here, I’m melting,” she said, basking in her success.

Fraley explained the rules of the game while Taylor Swift’s “Blank Space” played in the background. The competition was a three-strike tournament with 24 total players. Four players at a time competed at a machine — group knockout style. First- and second-place point-earners were in the safe zone, and third- and fourth-place point-earners received a strike. A player’s third strike disqualified them.

The top four players were each awarded a percentage of the tournament registration fees, and the third, second, and first place winners also got one of the neon light-up trophies. In Fraley’s love for the tournament, she paid for the trophies out-of-pocket.

The energy in the room was radiating with friendly competition. Players discussed the pros and cons of wearing heels while playing. Some liked to lean down at eye level, while some liked to stand over the play field, seeing it from a bird’s-eye view. One player dressed as Wednesday Addams walked down the line of machines and smiled, “We’re all gonna win!” Other players were dressed as Velma from Scooby Doo, cowgirls, and doctors; Leyden wore devil horns.

The overall vibe was about the women competitors, all of whom congratulated each other, shouting,“good ball!,” and shaking their heads with empathy when a round didn’t go so well. “It only takes one ball, one ball,” the players kept repeating to each other. One good ball could solidify your spot in the safe zone.

“I feel like that’s how all the all women’s events go, a much more supportive atmosphere,” said Juana Summers, who traveled more than five hours from Baltimore to attend the tournament. Summers and another player, Stephanie Traub, both opted to wear headphones while they played, giving off a more intense aura.

For the most part, Traub kept to herself. Summers and Leyden ended up playing a couple rounds against each other, joking around and supporting each other through the process. Others were starting to feel the pressure. Player Christina Turner told me she was nervous.

“You don’t think it’ll be intense because it’s pinball, but it really is nerve-wracking,” Turner said. “Once you’re here, and other people want to win, you want to win, too.”

As the tournament progressed, the player pool got smaller. Leyden ended in the top five, without a strike bracket. Walking around the room, I snapped pictures and took in conversations happening around me at the various machines. “She’s astounding,” someone said, pointing to Leyden. Fraley saw me in awe.

“Your girl’s doing pretty well,” Fraley said. “Looks like you’ll be here a while.” Summers asked if she’d ever played in a tournament before. Leyden smiled, and told her no. 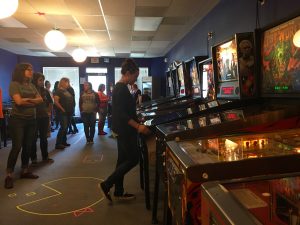 The last four competitors were Leyden, Traub, and two women named Caroline Creekman and Sandy Gramling. Fewer machines were lighting up, the bells died down, and the crowd was paying attention. Former players started to shed the more uncomfortable accessories of their costumes, as wigs and spiderwebs were removed. Almost everyone had a beer in their hands.

Leyden and Creekman were playing on their first strike, and Gramling and Traub were both playing on their last strike. Being in the top four secured Leyden’s standing in leaving with a cash prize; the neon trophies were actually in her grasp — she never thought she’d make it this far.

With the silence brought the pressure, and Leyden wasn’t doing so hot. “Just takes one ball, one ball!” she kept saying. Gramling eventually pulled ahead in the end, with Leyden laughing and saying “the pressure, the pressure!”

Creekman and Traub eventually played for first place on a Dirty Harry machine. The crowd was silent, with the only noises coming from the pinball machine. Traub’s earphones were off and sat with her phone a couple machines down — she let a few expletives loose during the game. Winning, she finally cracked a smile — yet the real story was Leyden, a random rookie who just wanted to play a few rounds, and walked away $30 richer.

“I want a trophy next time,” said Maya, as we were leaving. Wait — next time? 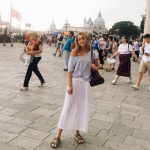 Christina McBride is a junior at the College of William & Mary studying English and Creative Writing. Christina finally learned how to ride a bike but can't release her death grip to signal a turn. She plans on writing forever and is never going to die.