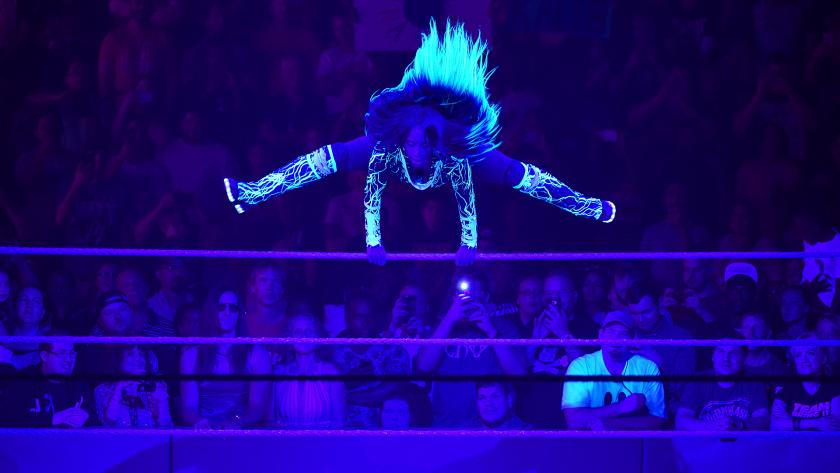 Historic. That’s what the 2016 edition of WWE Backlash will be known as. Truly historic. It was the first brand-exclusive PPV of WWE’s “New Era,” an event that could have been a “make-or-break” situation for the new brand extension.

Historic. That’s what the 2016 edition of WWE Backlash will be known as. Truly historic. It was the first brand-exclusive PPV of WWE’s “New Era,” an event that could have been a “make-or-break” situation for the new brand extension.

On top of that, it was the biggest chance for SmackDown Live to establish itself as a true alternative to its flashier Monday night competitor. With a limited build to the event and a significant line-up change, the odds were definitely stacked against Backlash, but just like the brand’s beloved general manager did so many times in his career, when it’s time to sink or swim, the show somehow found a way to soar and leave Richmond abuzz with some premier wrestling entertainment.

The biggest result from Sunday night’s event came to us in the main event where AJ Styles defeated Dean Ambrose to become the new WWE World Champion. The two had an exciting 25-minute match that went back and forth between tight wrestling exchanges and uncontrolled brawling sequences. In the end after a devastating Calf Crusher and unbelievable springboard 450 Spalsh couldn’t finish the reigning champ, it was an infamous ref bump and low blow that allowed AJ Styles to hit Dean Ambrose with the Styles Clash and not only secure victory, but truly make history as the 128th WWE World Champion. 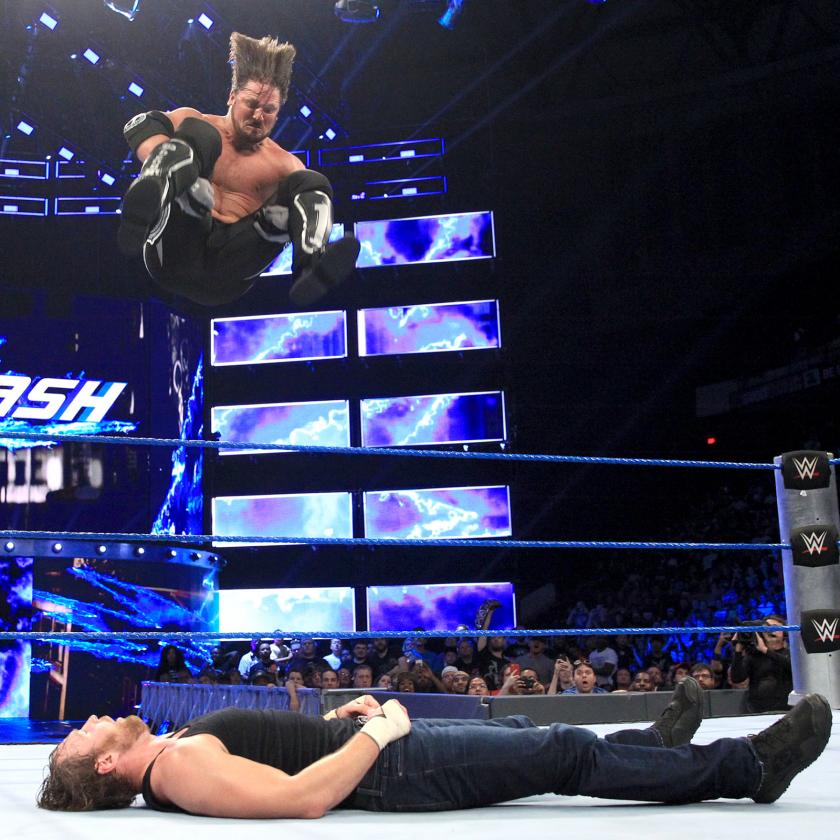 To most fans, it seemed unlikely someone like AJ Styles (seen above, flying in the air) would make it to WWE.

For over a decade, AJ Styles was the face of TNA, a role he reveled in despite the company’s obsession with showcasing ex-WWE superstars above anyone else. No matter what happened though, AJ Styles was the bread and butter of TNA, their own homegrown talent and perhaps best wrestler that could always deliver whether it was in a short opening match or epic main event. For most of his time there, AJ Styles relished his role in the company and had no desire to leave, but when contract negotiations in late 2013 turned contentious, the Phenomenal One struck out on his own ultimately landing in Japan as WWE reportedly had little interest. It was in Japan as the second leader of Bullet Club, New Japan’s widly popular (and villainous) stable, that AJ Styles’ reputation grew to even higher heights. It was only time before WWE took notice and snatched him up, and that’s exactly what happened at Royal Rumble when AJ Styles entered the company with one goal in mind: the WWE World Championship.

Despite his immense popularity and spectacular matches since then, the chances were still low for AJ Styles to become champion, but with the brand extension and SmackDown Live’s desire to be different, AJ Styles now has the chance to prove that he is not only an unmatched talent, but one of the absolute greats in wrestling’s rich history. His match with Dean Ambrose Sunday night proved just that as he was arguably as popular as the perennial crowd favorite across the ring despite being a true villain, and he even pushed Ambrose to perform at a level few have seen from the Lunatic Fringe before. The reign of AJ Styles began in Richmond last night and it’s definitely not something this city, or wrestling fans worldwide will forget any time soon.

Also making history Sunday night were Becky Lynch (seen below) and the duo of Heath Slater and Rhyno, who became the inaugural SmackDown champions within their own division. Becky Lynch outlasted five other women in an elimination match to become the champion, an achievement she seemed genuinely touched by in her post-match interview.

The match itself was standard fare for WWE multi-person matches, but did have plenty of exciting moments and sequences. Surprising of all was the time the women were afforded here. It wasn’t too long ago that women were struggling to get even five minutes of ring time, even if it was a multi-women match. Here, the match not only got enough time, but it felt perfectly paced with each woman having a chance to shine from newcomers like Alexa Bliss and Carmella to veterans like Natayla and Nikki Bella. Naomi’s top rope dive (top image) to the outside on top of the other competitors was a stand-out moment of the match and the image of Becky Lynch’s celebration after submitting Carmella showcased a beautiful side of pro wrestling we often forget about. It was a great way to kick-start the show and served as a perfect contrast to the other inaugural championship match later on. 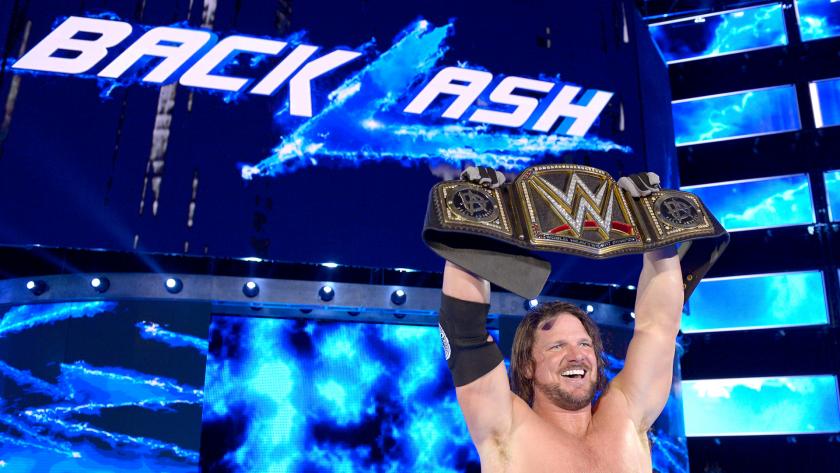 Heath Slater (seen above) and Rhyno’s rise to championship gold was as improbable as it was glorious with the crowd absolutely loving how perennial jobber Heath Slater was flourishing with the spotlight finally on him in his quest to get a contract. Rhyno himself earned the crowd’s appreciation with chants of “You still got it” being sprinkled throughout their match with The Usos, a duo who pulled double duty on Sunday’s card. Earlier in the night, they had their semi-final match with The Hype Bros, their first match since becoming heels. With a new attire and attitude, each Uso brother seemed determined in the ring for each of their matches, especially in the semi-final match where their aggressive high flying matched well with the intense energy of Mojo Rawley and Zack Ryder. Sadly, the energy and crowd support wasn’t enough for The Hype Bros here as they fell to the Usos in a similar manner that caused American Alpha to withdraw from the tournament. But the crowd got its vindication when Rhyno gored his way to tag team gold late in the night. With dozens of “Heath’s Kids” in attendance, the crowd erupted as Slater stated he was getting a double wide trailer with the money from his new “contract,” ensuring that the vignettes of Heath’s life outside the ring must continue. 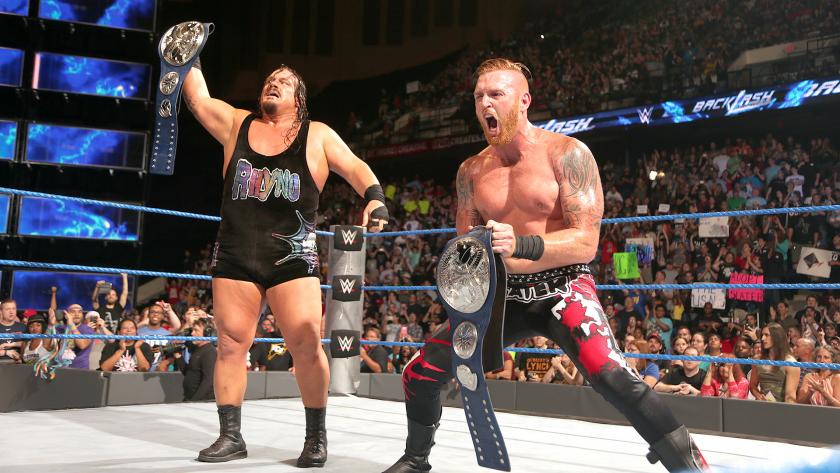 History was made elsewhere on the card in an atypical fashion, as The Miz delivered his best in-ring performance in years… despite doing so in direct disrespect of SmackDown general manager Daniel Bryan. Their recent Talking Smack segment fueled his match with Dolph Ziggler as The Miz was anything but boring as he pulled from Bryan’s own moveset to perform at a level he hasn’t in years, or maybe ever. Still, the coward came out in the end as Ziggler’s wife and manager Maryse managed to secure him the victory thanks to spraying some volatile product in the eyes of Dolph Ziggler. Ziggler’s woes continue here, but the Richmond crowd was in complete support of The Show Off as he continues to find his footing in WWE’s “New Era.” Even as he struggles though, he’s still able to perform at a top-level and the two competitors here delivered a fantastic Intercontinental match that exceeded all expectations.

Of course, not everything went off without a hitch Sunday night. Hours before the event, Randy Orton was reported as being pulled from the event due to an undisclosed injury. During the show, a backstage segment wrote Orton off for the match as Bray Wyatt brutally attacked his ankle with a door. Most were disappointed when the match between the two was called off, and even though Wyatt’s impromptu match with Kane provided some brutal and exciting moments, the crowd’s excitement had definitely been damaged. It rose significantly as Orton made a brief appearance, giving Bray Wyatt an RKO so that Kane could pick up the victory, but for those anticipating The Viper squaring off against The New Face Of Fear, the replacement match fell flat even with someone as legendary and beloved as Kane in the ring.

For Richmond’s first major show in a decade, the crowd definitely rose to the occasion while being overly gracious and completely uproarious, the absolute perfect crowd for a WWE event. There were plenty of characters in the crowd — like a CM Punk cosplayer complete with a bandaged ear who jaw-jacked with anti-Punk signs from across the arena — and tons of witty and hilarious signs, but the most important aspect was how attentive they were with every last thing appearing on screen or in the ring. The dual chanting in the main event alone was enough to cement Virginia’s capital as a great wrestling town, but even their strong response to the unflashy, but finely wrestled, pre-show match between Apollo Crews and Baron Corbin should show how rabid the wrestling fanbase can be in Richmond. Backlash was a good wrestling show on its own merits, but with a crowd like one at the Coliseum Sunday night, its quality was definitely elevated adding even more importance to its historic nature.

Exciting and unsuspecting title changes. Inventive and brutal matches. Perfect storytelling and silly comedy. Richmond got it all Sunday night at WWE Backlash, an event that further establishes the strength of WWE’s live reputation and makes it one traveling show you never want to miss.