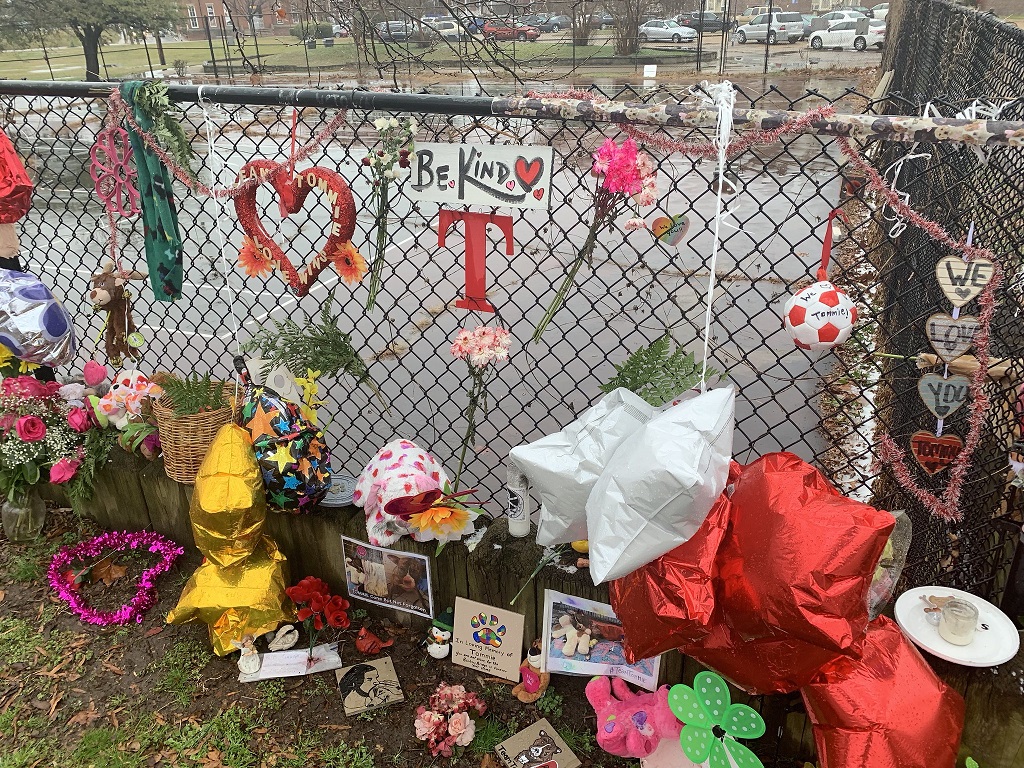 A few more pre-orders and a General Assembly sponsor are all Richmond Animal Care and Control needs to establish a license plate design commemorating Tommie the pit bull.

A Virginia animal shelter wants to release a license plate in memory of Tommie the pit bull, who died after he was tied to a fence post and lit on fire, and the organization said it needs a final push to make it happen.

Richmond Animal Care and Control announced on its Facebook page late last month a license plate honoring the dog that captured hearts around the world. If approved, the plate would include a picture of an animated pit bull with the hashtag #TeamTommie and the organization’s logo.

Robin Young, RACC outreach coordinator, said the procedure to introduce a license plate into the Virginia Department of Motor Vehicles is standard. First, at least 450 license plates must be preordered. If that goal is reached, a bill can be submitted to the General Assembly in 2020.

Young said that as of Thursday over 270 applications were received, with more coming in every day.

“We’ve definitely had a lot of support,” she said. “Now we just wait and see and promote it at this point to see if we can get the numbers.”

Young said $10 per plate would go directly to the Tommie Fund, along with portions of the annual renewal fee. The Tommie Fund was implemented recently to help other shelters across the state cover emergency medical costs for animals in their care.

It’s been almost a year since Tommie died. Jyahshua A. Hill was convicted of felony animal cruelty for chaining Tommie to a fence post in February, dousing him in a flammable liquid and then setting him on fire, after saying the dog attacked his child.

Tommie was rescued by the firefighters stationed across the street, who ran over with a fire extinguisher, RACC said. The pit bull suffered burns on 40 percent of his body. RACC helped get Tommie to the Virginia Veterinary Center, and the VCU Medical Center Evans-Haynes Burn Trauma ICU assisted in his care as well. He died five days later, but not before his story spread globally and generated thousands of dollars in donations.

Enough money came in that the shelter could offer a $25,000 reward to help find and convict his attacker. After his death, both chambers of the General Assembly unanimously passed a bill — already introduced before Tommie’s attack — to increase the penalty for animal abuse from a misdemeanor to a Class 6 felony, which can draw up to five years in prison. Senate Bill 1604, introduced by Sen. Bill DeSteph, R-Virginia Beach, became known as “Tommie’s Law.”

Tommie’s story lives on through fundraisers, commemorations — a patio and a beer named in his honor — and t-shirts. All of which combined has raised well over $100,000 to continue funding RACC’s community work.

Katie Wittman, manager at Three Notch’d Brewing’s Broad Street location, said that Tommie’s Beer was a huge success and people from all over the East Coast called to ask about it. Portions of the beer sales were donated to Tommie’s Fund.

RACC has until Dec. 31 to collect and submit the 450 preordered license plate applications needed before legislation can be introduced in the General Assembly for the official plates in 2020. The cost is $25 for a regular plate and $35 for a personalized plate.

As of now, no legislators have agreed to sponsor the legislation, but Young is confident there won’t be any issues getting someone to sign on and getting the plates released.

Young said Tommie’s case has been “kind of above and beyond the norm for us.”

“We expected people to be touched and outraged by it, but the amount of support and outrage received was even surprising for us — the level we got.”

Legislation making its way through the General Assembly would raise the legal age for purchasing and possessing tobacco and vaping... READ MORE

Legislation making its way through the General Assembly would raise the legal age for purchasing and possessing tobacco and vaping... READ MORE