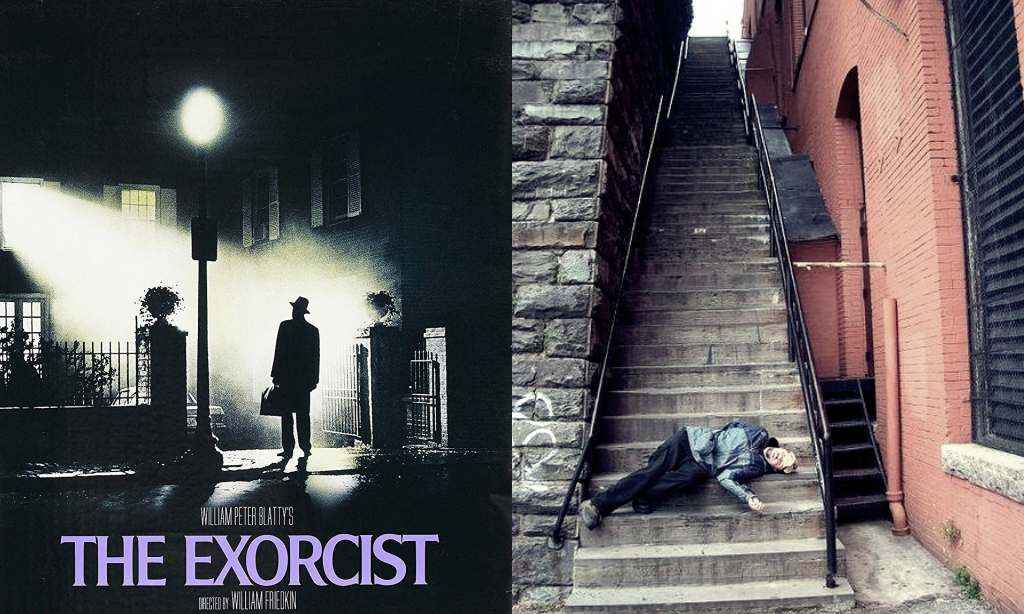 1973’s The Exorcist is the greatest horror movie of all time. The film, directed by William Friedkin, and starring Ellen Burstyn, Max Von Sydow, and Linda Blair, follows the demonic possession of a child in the Georgetown neighborhood of Washington, D.C. In the movie, Ellen Burstyn plays an actress filming a movie in Georgetown, when her child, played by the incredible Linda Blair, starts to talk in tongues, puke green goo, and generally become murderous — all the tell tale signs of demonic possession. As the movie unfolds, a staircase which lurks right outside of her bedroom window becomes central to the plot line as the preferred method of dispatch for the young denizen demon.

Spoilers: Everyone dies in the end. Or do they? Satan.

Anyone who has climbed the 97 steps from M Street to the top of Prospect Street will comment on the steepness of the angle, and just how treacherous a potential fall down them would be. This is what makes their usage in the movie equal parts terrifying and thrilling.

Alas, nothing in Washington, D.C. is sacred anymore, and the powers of gentrification do not end at the bottom of The Exorcist steps, which might soon go the way of the movie’s own demon — exercised.

According to an email statement by the Prospect Street Citizens (the group fighting to preserve the steps) to the DCist, “Our group has long been concerned with any ongoing development activity at 3601 M St., NW,” citing the lack of concern by developers towards the historical value the steps bring to the neighborhood.

The statement goes on to say, “So far, we have not felt that the various entities involved in reviewing any development have given a thorough and prudent review to these outstanding issues.”

The statement also says that protecting the stairs are of “utmost importance” and that they hope to preserve them because “It’s too important a fixture in Georgetown to be rubber-stamped by another development-friendly bureaucracy without weighing all the facts.”

The DCist reported that a new condo building is scheduled for construction next to the cinematic steps, in an adjacent lot scheduled to open in 2019. This, in turn, has led the Prospect Street Citizens to file an application with the Historic Preservation Review Board in D.C. — the body “designates historic property” and informs the mayor on what should and should not be preserved.

Beyond preserving the legacy of The Exorcist, the steps were built somewhere between 1894-1895 as part of a location to park street cars, and contained more than ” 80,000 cubic yards of excavation,” making it an integral part of the district’s history.

The Prospect Street Citizens case can be heard in November. Preparation for said case will likely need to include a ouija board to summon “Captain Howdy,” Father Merrin, and a strong bottle of holy water.

“The power of Christ compels you.”