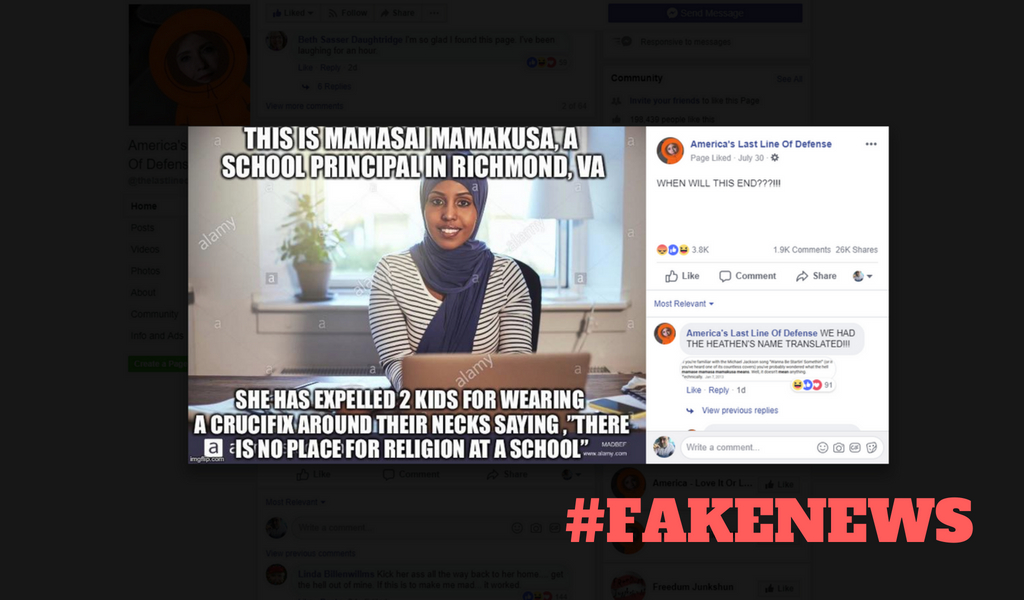 No, Richmond Doesn’t Have A Principal Banning Christians from School

According to this meme, Mamasai Mamakusu is the hijab-wearing principal of a Richmond high school, and she’s here for your crosses.

It’s fake, of course, just one of the many creations of Christopher Blair, a satire writer whose pieces keeps showing up in your social media feeds thanks to your most gullible friends. Blair currently runs America’s Last Line of Defense, a site featuring an image of Hillary Clinton as Kenny from South Park, with the tagline “Information you probably shouldn’t trust.”

If the Michael Jackson “Wanna Be Startin Somethin’” reference didn’t tip you off (Mamasai Mamakusu are meaningless lyrics from that song), the watermark on the image of a hijab-wearing young woman should have made it clear.

Reached over Facebook, someone associated with the site who went by Charles Bartowski (“I just want that name in print because I don’t feel enough people watch “Chuck” anymore.”) confirmed that the story is satire, and the Richmond angle was random. “Most of what we do here is random. You know that South Park episode where they joke about the Family Guy writing process? Sometimes it feels kinda like that. Sometimes cities are real, sometimes they’re not. Everything here is nonsense though.”

“Bartowski” said the goals of the site are to encourage readers to think critically about the media they consume, and, “to expose exactly how stupid a certain segment of our society is.”

While Richmond Reddit users seemed to be in on the joke, and it was clearly marked as satire on the Facebook page, Snopes took the story seriously.

Rating the story “False,” Snopes characterized America’s Last Line of Defense as “part of a network of fake news sites dedicated to spreading political misinformation under the guise of proffering “satire”.” Of course, the page admits it’s satire, so the Snope’s claim that satire is a “guise” seems a bit fishy from a site that ranks itself the arbiter of media truth.

My contact at the Facebook page wasn’t surprised by the Snopes reaction. “One of their writers has a personal beef with Chris [Blair, site owner] and some others here so they go out of their way to misrepresent us as the root of all evil,” they said. “Everyone needs a villain, real or not.”

If anything, Blair and “Bartowski” are the heroes of my morning; I’ve spent the last 30 minutes listening to the King of Pop on YouTube after pulling up “Wanna Be Startin’ Somethin’.” Rock on, MJ.