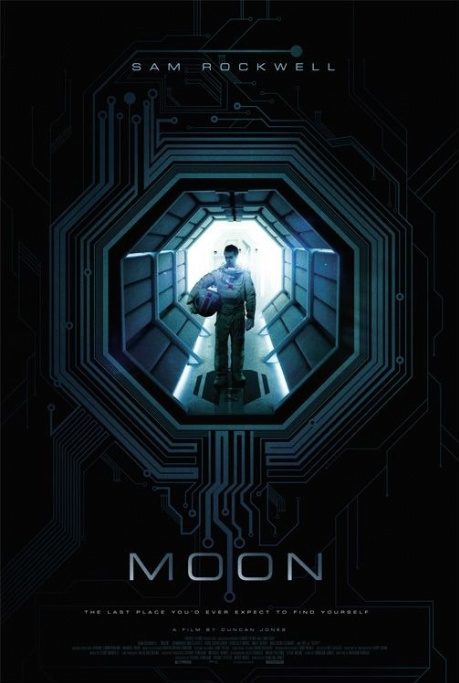 Moon is that one film that science-fiction enthusiasts wait for. After an onslaught of commercial pictures in the genre, a film like this reminds us that science fiction can exist in an intelligent realm.

Moon is that one film that science-fiction enthusiasts wait for. After an onslaught of commercial pictures in the genre, a film like this reminds us that science fiction can exist in an intelligent realm. Director Duncan Jones delivers a tale that examines the existential riddles within a future Earth that is in dire need to discover a cure for an energy crisis at any cost necessary, all morality aside.

The story follows astronaut Sam Bell (Sam Rockwell) as he is about to complete his three-year stay on the surface of the moon. His mission on the moon has been to collect helium-3 and shuttle it back to the planet as a new source of energy for Earth to strive on.

Hallucinations begin to set in which Sam attributes to his recent health ailments, but it all comes to fruition after an accident he endures. He awakens to the voice of his station’s robot named GERTY (as voiced by Kevin Spacey). Sam is informed that he suffered a head injury that may have resulted in a concussion and slight memory loss. The company Lunar that he works for has demanded he doesn’t leave the station until a rescue team has arrived. After Sam’s recovery, he is confused and angered by this restriction placed upon him. As soon as he finds a way off the station, he uncovers several secrets regarding the mission and himself that he may or may not be prepared to understand.

Sam Rockwell is one of the more captivating actors of our time. With roles in Confessions of a Dangerous Mind and Choke, he has displayed the necessary presence to be a leading man. With Moon, Rockwell is given this opportunity and he flourishes. The majority of the picture relies on him to play off of the deconstruction of a man’s psyche when encountering intense isolation. His character has been deprived of a constant live feed with the planet. His interactions with his wife and newborn baby girl are limited. When his wife makes any reference to a past digression in their relationship, he is unable to react to the subtle remark. In moments of subtlety such as these, Rockwell hits his mark. Sam Bell simply wants to have a connection with someone besides the robot on board. When things start to unravel and the cloak that has been looming over all operations becomes apparent, Rockwell deals with these mixed and fleeting emotions with a finesse that most actors in bigger budget pictures wish they could pull off with such ease.

Jones’ direction really helps sell the story. The picture was made with a budget of five million and all of the shots on the surface of the moon were manufactured with practical effects. There is also this distinct effect done to the shots taken on the moon. It feels as if a distinct grain is placed on the frame giving the shot a presence that seems remarkably foreign.

While taking in all of the environments, I was drawn into the intricacies of the space station. Since the majority of the film takes place in this station, the corridors begin to grow more and more familiar as the plot thickens. When discoveries are made, you grow just as fascinated and surprised as the characters on screen in front of you. It also helps examine how the clean, lifeless shades of white everywhere can make a place feel that much more empty and soulless.

While watching and examining Moon, I was reminded of the 2007 Danny Boyle picture Sunshine. Both pictures examine an attempt made by mankind to develop a workable solution to an energy crisis. Sunshine dabbles a bit more in the supernatural spectrum of this universe, but is still mighty effective. I found myself preferring Moon for more of it’s allusions to science fiction of the past. Perhaps a film like Sunshine could find it’s predecessors more in line with the early installments of the Alien franchise, where a film like Moon belongs next to films akin to 2001: A Space Odyssey in it’s take of the lonely, isolated confines of space exploration.

All in all, Moon is a wonderful film. It isn’t perfect, but its flaws are overshadowed by the triumphs. If you’re in the mood for a film that really shows off the acting talents of Sam Rockwell and introduces the world to the directing talents of the successfully ambitious Duncan Jones, then don’t hesitate to check out Moon while it is still at your local multiplex.