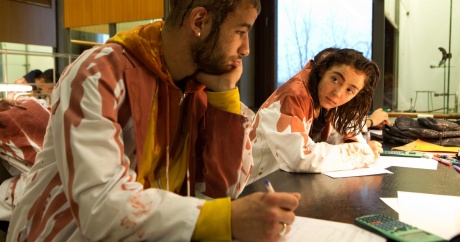 Justine’s parents, who drive their timid daughter to school, are oddly both vets and vegetarians, and, Justine seems to follow this logic as well.

The first week of Justine’s foray into meat eating depravity and cannibal metamorphosis (and this very odd vet school) centers on not only hot coeds raving, drinking, animalistic degradation, and continuous brutal hazing from the “elders” (random upperclassmen), but also her confronting her own virginal, vegetarian viewpoint. From eating rabbit kidneys (with complimentary shots), seven minutes of heaven involving splattered paint, retrieving beds thrown out of windows, and all out hedonism, Justine adapts the best as she can for a girl so seemingly sheltered.

I heard the veterinary schools in Europe were wild, but I honestly had no clue to what extent.

One of the more disturbing scenes shown is when the students are shown how to sedate a horse with ketamine. And while no harm comes to this animal, its visual depiction is stark and explains that as beasts, we too are at the mercy of our own bodies.

Justine is also bizarrely scrutinized for doing well in school by her professor, specifically for being excellent and having it come easy to her. This world seems to prefer things to be difficult.

Thankfully Justine’s older and more experienced sister, Alexa (Ella Rumpf) is around to “help” her sort through her most disconcerting of times and ritual abuse. Alexa seemingly has already come to terms with her cannibalistic nature and hopes to show Justine the ropes through sisterly imitation.

Both girls eventually get into a figurative (and literal) pissing match as Justine’s gay roommate (Rabah Naït Oufella) is seemingly up for grabs as both are now man-eaters. With either sex or addiction, Raw says a lot of about the seductive terrors of young womanhood in salacious fashion.

Raw is also dark and deceptively humorous, and particularly great at showcasing how our meek heroine Justine’s transformation into a monster is easily done within the first month of college. It’s an interesting concept of nature versus nurture and how far in society can we avoid our own predisposed inheritance.

While admittedly I was personally grossed out mostly during the animal scenes, I don’t think a puke bag is essential for witnessing this film (as it’s been reported that some L.A. screenings come with them) and all its gory bits and Brazilian waxing gone awry. I think already you know if this movie is for you or not.

I would however say that if you have problems with animals being operated on, eaten, slashed open, or even being possibly being cruelly mistreated, you might want to stay far away. While our protagonist is against eating meat initially, for reasons that aren’t actually revealed until later, it’s initially a bit strange as to why she in particular would ever convert into eating… more relatable kinds of flesh seemingly randomly.

The movie’s exploitative, cannibalistic nature is somehow actually convincing to a degree, but you can still find it to be relatively tongue in cheek. You’ll spend a lot of the time wondering “why is this happening?” but entirely engrossed in where it goes and why it’s even going there.

If it weren’t so well shot, and so well acted, you’d find this allegory of a dystopian world of extreme party schools for veterinarians utterly baffling. One wishes that last year’s The Neon Demon, with its brilliant visuals and sounds, would have offered something as human and thought-provoking as Raw does.

Truth be told, the genre is rife with creating monsters out of adolescent female sexuality, as 2007’s Teeth especially comes to mind, but Raw, with its artistic scale, stands above them.

It was only a matter of time before we got French sex cannibal movie we all wanted, Raw is very much the one we deserve. Just don’t think too heavily about the logistics or where the police might be, and you’ll have a bloody good time.