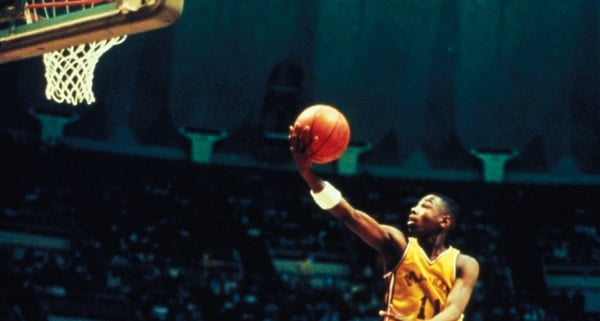 Since its release over 20 years ago the legend of Hoop Dreams, a tale of two lower-income kids from Chicago striving for their ultimate dream to rise up and play in the NBA, is alive and well.

Since its release over 20 years ago the legend of Hoop Dreams, a tale of two lower-income kids from Chicago striving for their ultimate dream to rise up and play in the NBA, is alive and well.

While never falling into poverty-porn territory, the film provides a thorough panorama of the realities surrounding these two budding, would-be stars as they navigate the grooming it takes to make their fantasies come true.

The three man team of Steve James, Peter Gilbert, and Frederick Marx followed William Gates and Arthur Agee from junior high to their initial college years catching their intimate lives and careers unfold in such a comfortable setting they documentarians never feel out of place.

It’s also why Hoop Dreams succeeds where other documentaries do not.

It never feels exploitive, nor does it make anyone feel guilty with its delicate, non-judgmental reserve.

Like a lot of great films, the level of intimacy displayed in the every-day urban struggle here is almost unparalleled. Countless scenes stick to your memory like when young Agee and his father “Bo” are bonding over a game of basketball only to be interrupted when his father slips away to buy drugs on the corner. Or when Arthur’s mother Shelia finally becomes a nursing assistant to an empty graduation ceremony juxtaposed against her son as he is cheered in a packed auditorium for high school basketball.

Catching these moments is the heart of Hoop Dreams.

Having watched Hoop Dreams multiple times over the years, and knowing what already is known now, I continuously find myself rooting for fresh-in-high-school Agee and Gates through their enchanting ups and heartbreaking downs.

I want them to succeed despite knowing it’s something that will never happen.

Hoop Dreams defines what exactly is of value in our pursuit of the American Dream and why that matters so much. Not many films dive this far into our obsession of sports culture, our indifference to poverty and class inequality, and our faulty education system.

Roget Ebert heralded the movie and cited it as one of the best of the decade.

The NBA hopeful’s lost cause is something every kid thinks about at one time, wondering if they will ever be one of the lucky few to make it.

Not only did Williams and Gates want to better themselves, but they wanted to better their families and provide for them a possible way of rising out of poverty and despair. And sadly, it not only seems plausible, if only a shot away.

I suspect I’ll never stop hoping and wishing these kids somehow make it to rise above these improbable odds.

Hoop Dreams was originally shot on video and brought over to 54 mm for the original theatrical release. Historically speaking, it’s a landmark film that took several years to shoot and keep up with as nearly 250 hours of footage was shot and whittled down to a 171 minute running time.

Like last year’s Boyhood, we see our characters literally grow up on camera.

The new high-definition master is astonishing and improves the film even further than the already strong previous Criterion DVD release.

The two commentaries, one featuring the filmmakers, the other featuring our two heroes, is illuminating and reveals a closer look at the scenes themselves with background anecdotes and observations.

Like watching old home movies, it adds a lot more insight as to what was going on with added understanding after-the-fact in these two men’s lives.

Brand new for this release is a post-script documentary about William and Arthur after the movie, and their struggle with newfound fame and their waning basketball careers.

Also included are the multiple Siskel and Ebert segments where the critics talk about Hoop Dreams was snubbed by the Academy Awards that year.

I have to agree, even though it was a landmark year in film; its absence is pretty obscene.

From a bygone era is also the music video for Hoop Dreams that sweats the 1990s out of its pores and neat to see.

There are few films or documentaries as gripping, heartfelt, utterly fascinating, and poignant as Hoop Dreams. It’s truly a one-of-a-kind urban biopic, humanizing the participants from the players, the coaches, the parents, the teachers, etc.. In the crazy college sports world our collective culture seems becomes more and more obsessed with, the idea that “somebody has to make it” drives the hopes and an aspiration of our titular stars but they still ultimately fail.

And underneith the head of the intoxicating cokctail of NBA success is the chance to improve not only themselves, but their families, friends, and their community; a daunting task for these, well, children.

It is a disappointment even the viewer cannot help but feel and reflect upon. Not only do we witness them making mistakes, miss shots, become injured, struggle to stay in school, the sacrifices, figuring themselves out, but also we see them literally grow up before our eyes.

Even background characters ranging from coaches, teachers, recruiters, siblings, and parents are so seemingly nuanced and colorful, like something out of a dense screenplay.

Watching as our naïve, but determined heroes fail to reach their lofty goals makes their struggle and resilience all the more remarkable. Hoop Dreams is a work of great cinema and it transcends from just entertainment to a magnificent blending of art, life, and sport.