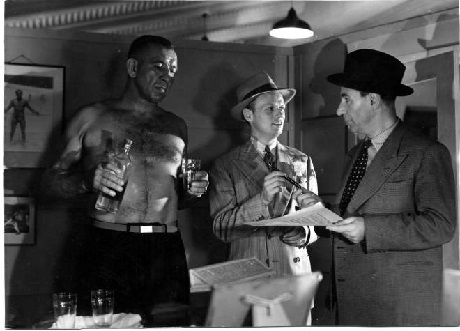 Based on a 1938 Gerald Kersh novel of the same name, Night and the City certainly lives up to its archetypical sounding noir title, but is quite atypical in its pessimistic identity and unusual plotti

Based on a 1938 Gerald Kersh novel of the same name, Night and the City certainly lives up to its archetypical sounding noir title, but is quite atypical in its pessimistic identity and unusual plotting.

Absolutely impeccable in his role is Richard Wimark, who embodies the role of wiry two-bit American crook, Harry Fabian, with his manic face with eyes popping and grappling for dear life or anything to hang on to, is one of the most compelling leads in noir cinema history.

Often we find our “hero” Harry racing around the dark, murky, and brooding London underground labyrinths like a trapped rat. He’s continuously racing, pacing, lying, conniving and trying to stay alive for just one more day; he is a man with little patience, but yearns to be somebody and for a life of “ease and plenty”. After trying to secretly rob his sweet but terribly down girlfriend Mary (Gene Tierney), his schemes eventually land him to take up promoting professional wrestling.

Harry gets Kristo senior to agree to wrestle for him by pretending to favor his older wrestling aesthetics thus becoming a personal enemy to the powerful, younger Kristo. Securing the money to put on the wresting event becomes another problem for Harry as his benefactor (Francis L Sullivan), an intimidating nightclub owner, learns that he is possibly involved with his wife (Googie Withers) who is also fronting money to Harry so he can give her a business license and for a chance to get away from her domineering husband who she has been leading on for quite some time.

Quite a lot of swindling going on here and is nothing new to the genre, but with a hero who is at best floundering and immoral, it’s quite unique and invigorating for its time to challenge the audience’s expectation in this fashion by giving them an ability to be neutral yet still enthralled.

Criterion brought over all of its supplemental material from its 2005 DVD release for the Blu-ray upgrade. This time the extra space allows for the two different version of The Night and the City to be brought over, the American and the British versions. The gorgeous transfer of the film is definitely up to snuff and showcases Dassin’s eye for symbolism, like Harry’s descent from a spiral staircase while fleeing unknown assailants to the impromptu wrestling match between the older Kristo and his younger opponent, The Strangler, while Harry anxiously cheers him on.

The 101-minute British version is included for the first time, which includes different music, a different opening, and a different ending. It’s a great example of how much you can change about a film with even little tweaks and fiddling, a long with a big change in showing a more romantic ending along with a slightly more sympathetic Harry. Also included is an interview with Dassin, an audio commentary by with film scholar Glenn Erickson, excerpts from a 1972 television interview with Dassin, Comparison of the scores for the British and American versions of the film, a trailer, and a film essay by critic Paul Arthur.

Jules Dassin, much like his constantly fleeing protagonist, was scrambling with his career and left America for England after being exiled over his alleged communist politics. Dassin, with his Gallic name and his other feature the French crime drama of 1955’s Rififi, is sometimes viewed as a transplant of an European by way of Brooklyn director, so it is easy to forget his of necessity and was mandatory after being blacklisted from Hollywood.

Dassin was advised to relocate to London, find a script, and start shooting as quickly as possible. He did just that, having not read the book until years later, and not even casting his actors himself, Dassin was just as desperate to keep his career afloat much like Harry Fabian was to sustain his ambitions and limbs intact.

Unlike Fabian, this somehow worked for Dassin who hired the right people and kept the production going. Dassin shot the most expensive parts of the film first as to create more leverage in case Fox studios decided to put the kibosh on the film.

Early production and casting was quick and furious, so Dassin could maneuver this film into higher probability of getting made and appeal to his studio. He was pitched the fabulous but notoriously depressed Gene Tierney as an easy get, which the gamble paid off tremendously well for him.

Dassin’s instincts lead him to a lot of right choices in what would become a noir classic that he himself is even confounded by his own luck. Despite his skills and smarts, Harry Fabian never delivered on his own promise to provide for himself and the ones he loved, whereas Dassin clearly did have the passion to continue make his films work no matter what. Night And The City is essential film noir.