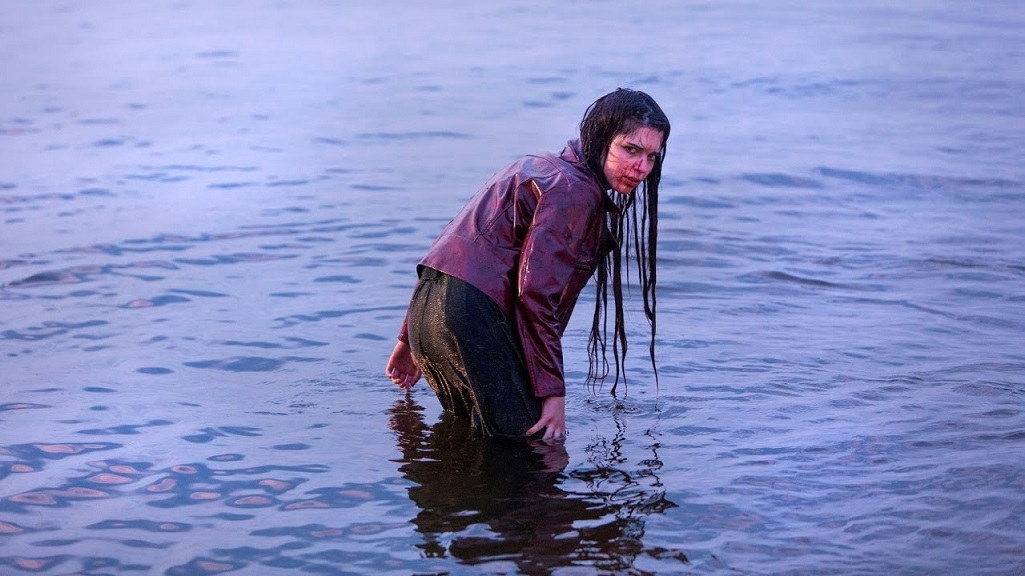 Not exactly a modern-spin on an old fable, The Lure is a stirring, if fragmented coming-of-human tale of two sisters who happen to be carnivorous, singing, vampire-like mermaids. After being lured by a family of intriguing music performers, Silver (Marta Mazurek) and Golden (Michalina Olszanska) two young, beautiful, mermaids find themselves the newest and hottest performers at Figs and Dates, a neon-lit 1980s “gentlemen’s” club in Warsaw.

And so, the mysterious sisters join the band they found so alluring singing their siren songs and find themselves as the newest and hottest act around, while also finding newfound temptations. Behind the beauty and vulnerable nudity, the girls have a welcoming, sinister gaze deep within that seems to enrapture not only the men but also the women. The two sisters have a tremendous bond and communicate telepathically (it sounds like layered dolphin noises) and decide to stay in Warsaw rather than swim to America as previously planned.

Silver (the blonde) soon is head over gills for the cute mopped-hair bassist (Jakub Gierszał) who brings out the lust in her. Golden (the brunette) however, is more interested in finding men to literally eat and dump the rest of their bodies in local bodies of water. The Little Mermaid this isn’t.

Problems arise as Silver is not technically a woman, and the bassist only sees her as a fish. Golden seems to be having trouble controlling herself and the locals are becoming more aware of the string of murders happening around town. The sisters seem to be losing their bond with each other slowly and after a night of partying with a punk/metal-mythological being named Triton, Silver learns that if her sister falls in love with a man who leaves her and marries another, she will become seafoam by dawn. This bit of information is quite useful and Silver decides to get her tail (props to the tail department, it looks great) surgically removed despite the chance of losing her voice and career. Doesn’t love make us do such foolish things?

Silver goes through the mighty surreal surgical procedure and she is now officially turned into a woman. When looked at from afar seems to be commentary on transitioning, but gender swaps this is not. The Lure often comments what power and agency young women have with their sexuality and that loses its appeal after it’s been given up. As you evolve and grow, you lose your appeal. Suddenly, like Silver, you’re now silenced for having chosen someone through devotion. It’s all the more bitter as the bassist falls for another during a recording session and soon marries his new love. Tragedy is all but confirmed when Silver accepts her fate and become seafoam and Golden seeks her violent revenge on the jejune bassist.

The genre-mashing, while refreshing and fascinating in its own right, has a hard time satisfying the coming-of-age/mythological balance set forth on this mish-mash of singing, dancing, and killing. Its potential is almost crippling in that there’s too much bizarre clashing happening. For every blood fueled death, there’s beautiful music and song to be had and tonally at odds with each other. While the actual singing from the actors is impressive, we don’t get deeper into who or what they are. The continuity of the world is never really defined, reduced to one-dimensional composites, while the story moves symbolically so. It’s a beautiful (if gaudy in an aesthetical sense) film with a more than capable cast that work well enough to inhabit this pastiche of an 80s fever dream. Just making all of these ingredients gel coherently is the problem.

The deeper commentary of the film is also never quite there. The abstract, dream-like quality of the world never concedes much consequence for anything. It all just sort of happens; the discovery, the success, the killing, the dancing, the romance, the transformation, etc. without too much provocation or aftermath. The fluid nature of the storytelling is hypnotic but also otherworldly. The sisters hope to one day venture out of the Warsaw habitation to America and I’m not even exactly sure why (beyond allegorical). The commentary on youth, puberty, and sexuality is absolutely the strong-point here, just never with much to say beyond that. Primarily if one goes in expecting a mythological slasher film with modern throw-back dance songs, you will probably be disappointed. A grand beauty for sure, The Lure is more arthouse/macabre fairytale and novelty-melodrama than a true genre picture. While it certainly has teeth, it doesn’t have much bite.

The Lure swims its way to the Criterion Collection in glorious high-definition digital master, all supervised by director of photography Kuba Kijowski with a 5.1 surround DTS-HD Master Audio soundtrack on the Blu-ray version. The film looks gorgeous with stunning colors and exuberant presentation with all the glitzy nightlife and thick saturation. In the supplements is an extensive look the making of the film, featuring interviews with director Agnieszka Smoczyńska, actors Marta Mazurek and Michalina Olszańska, screenwriter Robert Bolesto, Kijowski, composers Barbara and Zuzanna Wrońskie, sound designer Marcin Lenarczyk, and choreographer Kaya Kołodziejczyk. Also included are deleted scenes, the trailer, new English subtitles, and two short films by Smoczyńska. The leftover scenes actually contain more developed beginning and endings to the film and give some more context of the world of The Lure. The film is certainly something different and darkly fun and adventurous.

Also included is an essay by novelist, playwright, and storyteller Angela Lovell who examines the film’s major themes and construction. As for Smoczyńska’s first feature, The Lure is absolutely impressive, shows great promise, and overall fascinating for what it is.

Available on Blu-Ray, DVD, and FlimStruck