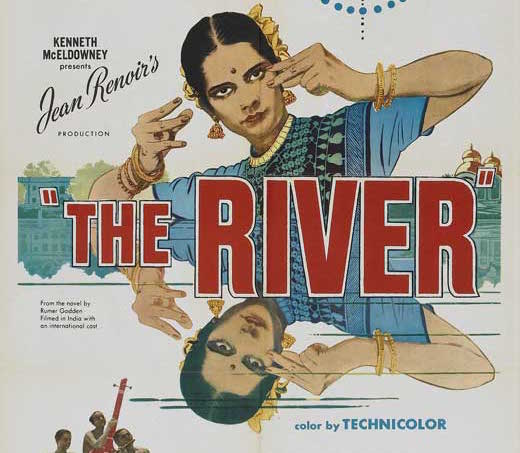 Based on Rumer Godden’s novel of the same name, The River stands as a pillar for French filmmaker’s Jean Renoir’s later often overlooked work.

Based on Rumer Godden’s novel of the same name, The River stands as a pillar for French filmmaker’s Jean Renoir’s later often overlooked work. It’s a film that combines a coming of age story, nostalgia, docudrama, and respectful dedication to a backdrop of India into a single story about three girls and their newfound infatuation with an American soldier.

Harriet, a teenage girl who carries a book of her own writing and poetry, is our main character for the duration. Her future-self narrates the film. Despite her English middle-class household and upbringing, she is not sure where she fits in her world, and the privileged setting provides a deep contrast to her native Indian surroundings and their own traditions.

The object of affection, Captain John, is simply a leftover of “the war” with no particular designation that has left him with a prosthetic leg. He is transplanted to this unfamiliar setting with little to do except fall in love and find purpose. The irony being that only in India is Captain John as exotic as he is.

Also vying for his attention also is Harriet’s best friend, the beautiful and older Valerie, and the meek Melanie who is of mixed heritage and even more worldly. Pairing Harriet’s close friends as romantic rivals is nothing new in storytelling, but in Renoir’s work it becomes a much more furtive story rather than insipid teenage yearning.

The River was Renoir’s first foray into Technicolor and it’s impressive; often showcasing the Indian landscape with a grounded, dream-like decorum and buoyant sensuality.

Instead of filling the world with lions and elephants, as Renoir was conscious of not doing, he instead intended to show the India he had observed and admired during his own visits. Choosing to highlight the beautiful stylistic contrasts of colors and vibrant life of those working and living around the riverbed rather than follow the typical Hollywood route of an exotic fantasy picture.

The timeframe is never precisely given but often feels typical of the 1920s post-war (the semi-autobiographical novel reflects this) and it is only mentioned in passing that some war had occurred somewhere.

These unspecific out-of-time qualities aided the film to the appeal of the dream-like feel of memory and past reflections.

The River may be less sophisticated than Renoir’s previous films, with less camera moves and easier subject matter, but it is still beloved by many of his admirers for it’s tender portrayal of humanity through his memorable characters.

The dash of variety worked to diversify Renoir’s catalogue and makes an excellent Blu-ray upgrade choice for Criterion.

Included in the release is a featurette of Martin Scorsese talking about the influence and love for the film, an enlightening introduction featuring Renoir talking about his undertaking of the film, an audio interview with producer Ken McEldowney, along with two documentaries on the film’s production.

One of the more fascinating details about the film’s production was its financing came from a Beverly Hills florist who was so dissatisfied by Hollywood movies. The florist’s wife dared him to do one better, so he sold his shop, became a producer, shopped around, and this was one of the films he worked on and was an actual success.

It was this kind of outsider thinking that allowed Renoir to construct the film to his liking and not following the clichés that were usually implemented in films such as these. The new Blu-ray release also comes with a fold-out leaflet with an essay, “A New Authenticity,” by Ian Christie, and “Notes on The River,” along with some production notes by Renoir himself.

After its publication in 1946, Godden’s novel The River received an ecstatic review in The New Yorker magazine calling it one of the best novels you’ll never read.

Renoir, not quite sure where to go in his career, came across the review, read the book, and wanted to make the movie an ode to India. The film’s use of color is magnificent and almost low-key at times. It’s radiant look and colorful aesthetic is very much a dreamy representation of India that never feels surreal, but rather enchanted. A lot of the actors weren’t well known and merely amateurs, helping to convey this sense of otherworld setting because of their anonymity.

Renoir was great at letting the look and lushness of the film and drive the senses and fill gaps of a story that is pure melodrama. While the ages of the girls never seem to be a big problem, it’s Harriet’s infatuation with an older man that never seems truly realistic in hindsight.

Rather than feeling bad for the misguided young woman coming of age and longing for her first kiss, it’s conveyed to something more unfortunate despite that actual fruition might actually evoke in the viewer. Captain John is just never meant to be for Harriet and we know this before even she does, but it’s her sensitive longing that drives the film.

Eventually the love triangle the film forms between Harriet, Captain John, and Valerie is a false one, but it still feels engaging and heartfelt. Harriet and Captain John still have affection despite their forlorn circumstances, and it is a powerful lesson in emotional maturity.

It is the downstream flowing of life’s inevitable growing pains that are the most insightful revelations come from a beautiful film like The River.