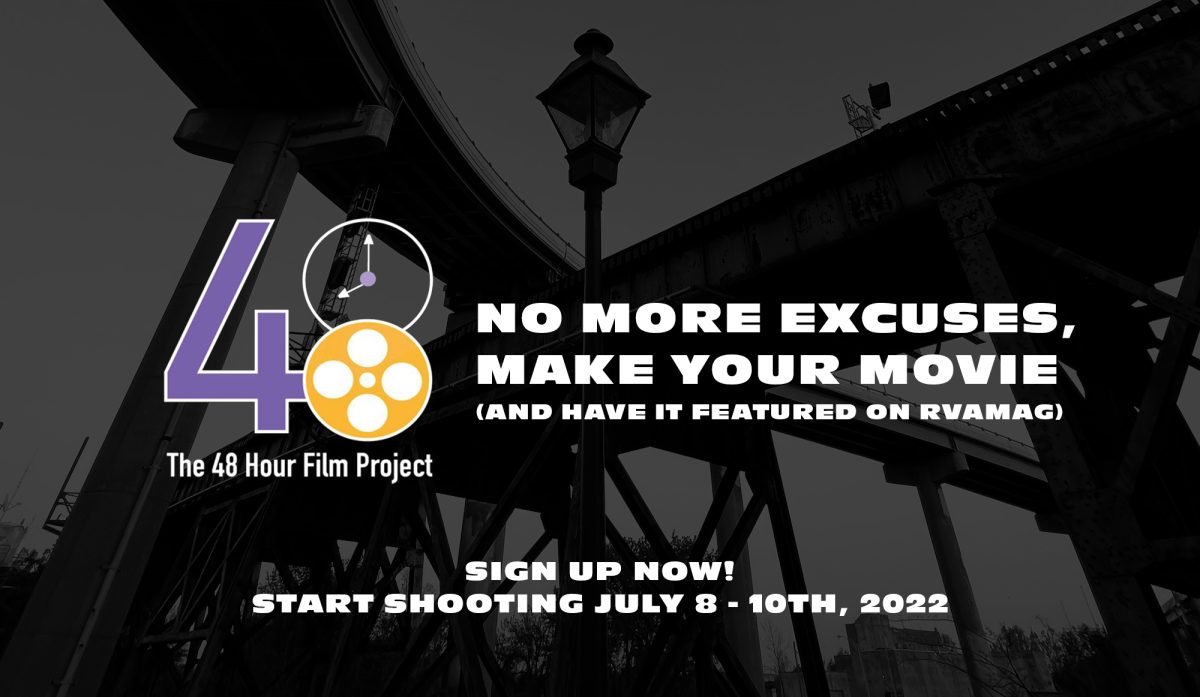 No More Excuses: Make Your Movie With The 48 Hour Film Project

We want to encourage more independent films to be made in Richmond, VA, and the 48 Hour Film Project (48HFP) has been doing that for a long time. Therefore, we thought it only made sense for us to team up. Which is our way of announcing that RVA Magazine will be presenting the film that wins this year’s 48HFP Virginia. It will premiere right here at RVAmag.com, as well as on our YouTube page and through a variety of social media channels. So keep your eyes peeled!

The 2022 edition of the 48HFP takes place the weekend of July 8-10, 2022. Participants will create their very own short film over that weekend. That means writing, shooting, editing, and coming up with a finished product, all over the course of 48 short hours. So make sure you’re well-rested beforehand, because you won’t have much time for sleep!

The 48 Hour Film Project is something that’s been happening on one weekend a year in Richmond for quite a few years now, so we wanted to get the lowdown: how did this annual event start out? What’s it like to participate? And how crazy is it to actually run one of these things? To get the answers to all these questions and more, we reached out to Lisa Giles, the current director of the Virginia chapter of The 48 Hour Film Project. She was nice enough give us an overview and help make sure that everyone reading this gets excited to join the party.

Lisa Giles: The 48 Hour Film Project is a global filmmaking challenge that charges its participants to write, shoot and edit a short film in 48 hours, given a character, prop, a line of dialogue and a genre that are provided just moments before the clock starts! Over 100 cities around the world participate, and each city winner competes at Filmapalooza (the grand finale taking place the following March, to be held in Los Angeles in 2023) to win a host of prizes (Best Film, Best Writing, Best Editing, etc.) and a chance to screen at the Cannes Film Festival in France!

RVA: What about the 48HFP excited you?

LG: I’m an arts lover and have always been a huge fan of cinema and all of its elements, behind and in front of the camera. When the 48HFP came to Richmond, I wanted to participate with my brother as cinematographer and editor, and with me as team leader (essentially the producer), director, writer, and maybe actor. I loved the idea of a ready-made system that, by its very nature, provides motivation for creators to go through all of the steps of making a movie — in a weekend — and come out with (hopefully) a finished product! What fun! What a challenge! Needless to say, I could never get my brother to commit, and I wasn’t connected with other filmmakers at that time, so it never happened. But here I am, years later, producing the event to facilitate this same opportunity for others with filmmaking dreams!

RVA: How did you get involved?

LG: I am the founder and former producer of the the Virginia High School League Film Festival, the Virginia state championship for film. One of the components of that event is education — panels of presenters teaching and discussing different topics in filmmaking. One of the speakers I’d arranged for that inaugural festival was Ellie St. John, the producer of the 48HFP at that time. So we became better acquainted after that. When she was ready to give up producing the 48HFP, she asked if I’d be interested in taking it over. She recommended me to the team at headquarters, they liked me, and here I am!

RVA: What is the hardest part for someone that gets involved?

LG: I think the answer to this question varies from team to team. For me, all those years ago wanting to participate, the answer would’ve been getting a skilled team together. For others it may be access to equipment, or writing a script on such a tight deadline. And for others, it may be sound, lighting, or editing. Every team has different strengths and weaknesses.

RVA: What do you feel the participants gain from doing this?

LG: The number one thing participants gain is experience. They almost always gain new friends. Definitely an expanded network. They gain material for their reel. Confidence for their next foray into the filmmaking world. Inspiration. Motivation. Satisfaction. A sense of accomplishment. And of course awards and prizes!

RVA: Where can people find the winner’s films?

LG: The global YouTube for the 48HFP, which has winning films from around the world, is at youtube.com/c/48HFPCENTRAL.