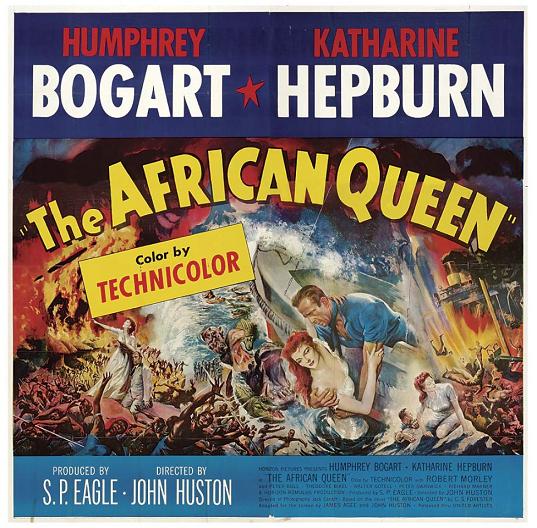 This week’s film takes us back to the year 1914 and the start of World War I. John Huston’s 1951 adaptation of C.S. Forrester’s novel of the same title, The African Queen, is truly a vibrant look at cinema when Technicolor production was on the rise. The audience can really see the film’s stars, Humphrey Bogart and Katharine Hepburn, as well as their surroundings, in rich, colorful detail.

Canadian supply-boat captain Charlie Allnut (Bogart) and British missionary Rose Sayer (Hepburn) find themselves fleeing the village of Kungdu in German East Africa after war breaks out between Britain and Germany. Rose’s brother has died at the hands of German soldiers, who have also set the village ablaze. After the two escape, Allnut tells Rose that the Germans have a gunboat blocking their path to unoccupied territory. Allnut wants to find a remote place and wait out the war, but Rose has an idea to turn their boat–The African Queen of the title–into a torpedo boat. She insists Allnut help ensure that her plan is carried out. The pair encounters many dangers on the channel of water they travel to destroy the gunboat, including rapids, leeches, reeds, mud, mosquitoes, storms, and sickness; as well as a group of German soldiers shooting at them. Before long, the two fall in love, and Capt. Allnut agrees to see the plan through to the end. Rose is determined not to go down without a fight, while Allnut is determined for the two to get married.

The chemistry and life that Bogart and Hepburn bring to their characters is the real beauty of the film. Rose is brilliant, classy, beautiful, graceful, and elegant. Capt. Allnut, or Charlie as Rose calls him, is respectful and polite, but doesn’t hold the same passion that Rose does. Her insistence that her plan be carried out seems driven by a desire to honor her brother’s death, but Capt. Allnut thinks that Rosie is just plain mad for even wanting to take such a risk. He humors her at first, but then drinks too much one night and tells her exactly what he thinks. At that point, Rosie unsurprisingly decides to rid the boat of all alcohol. Allnut has not yet acknowledged his feelings for Rosie, and tries to clean himself up and rise to her level, to regain the respect she had for him before his drunken tirade. However, after escaping a second brush with death, they acknowledge their feelings for each other, at which point both begin to relax. We see Rosie come down off of her pedestal and attempt to meet Capt. Allnut in the middle, and it’s through this more truthful approach that they are ultimately able to connect and work successfully together.

The production of The African Queen was something in and of itself. The shooting took place on location in Uganda and in studio spaces in London. On location, many of the cast and crew were subjected to the harsh reality of their surroundings. Living conditions were barren and most on set, including Hepburn, were often sick. Bogart is known to have boasted that he escaped illness by drinking whiskey instead of water. Additionally, the Technicolor cameras were especially frustrating to maneuver around. They were quite large and extremely heavy, but their use made all the difference in the visual quality of the finished film.

Not only has The African Queen been preserved in the National Film Registry and appeared on AFI’s 100 Best American Movies, it won Bogart the Academy Award for Best Actor–his only Academy Award before his death in 1957–and Hepburn was nominated for Best Actress for the film. The film also received Oscar nods the same year for Best Adapted Screenplay as well as Best Director. So if you have some time, climb aboard The African Queen and set sail alongside Humphrey Bogart and Katharine Hepburn for an everlasting adventure. 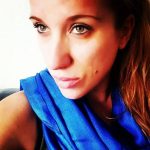