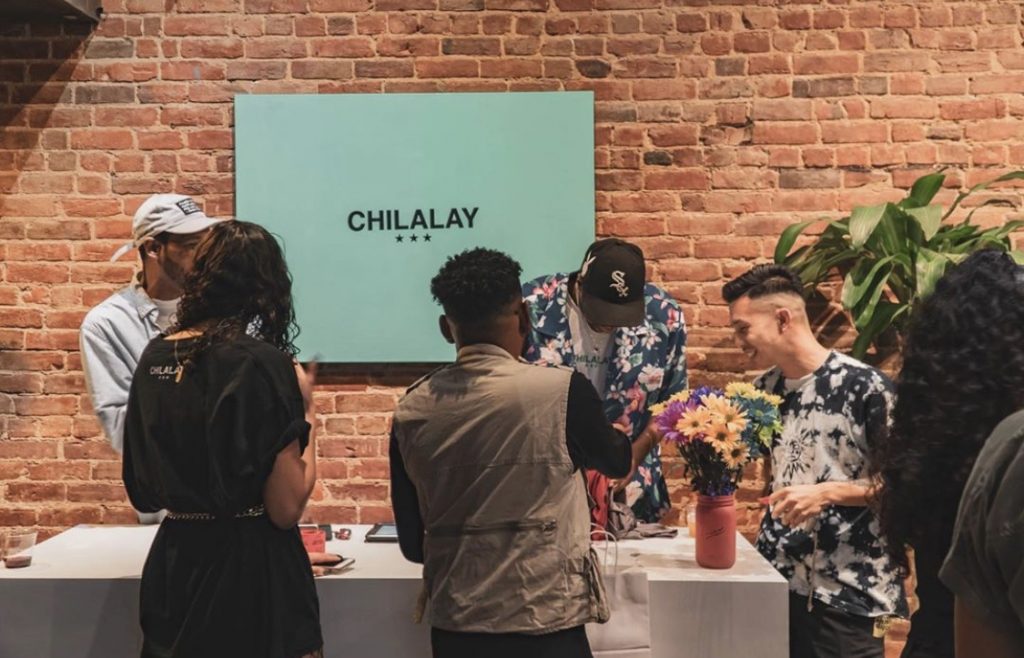 On a humid October First Friday in Richmond, Virginia, a street that connects different sections of the city together is filled with its residents. Groups of people trotting the sidewalks, coming in and out of stores and restaurants, laughing with one another as they make way for the hundreds of other groups walking on the same strip.

The sounds of music from multiple venues merging and mixing with each other can be heard all around. The doors of almost every store on each block are open to the public, creating a mysterious feeling of wonder for every guest. Alongside these stores sit people behind tables; cloaked and covered with an excessive amount of art and merchandise from some of the more obscure creatives in the city. Conversations about the identity and purpose of these pieces are subtly audible as you walk by; everyone has a story to tell and most have a story to receive.

On one side of the street sits a brand new store. On its front window is a white logo: the word “CHILALAY,” printed above three stars. Small groups of people are walking in and out, opening and holding the doors for others. A DJ sits next to the register spinning popular songs; you see people nodding their heads and singing along with their friends. Others flip through articles of clothing, racing their peers to see who can find their size and who can’t. Faces of a few guests light up, noticing the rarity of each piece as they move from rack to rack; people converse about the store “changing the status quo of Broad St.,” and the revolutionary future it is bringing.

“This location is prime real estate for a lot of spaces that are part of the culture in the city,” said Earl Mack, co-founder of Chilalay. “The immediate radius is filled with popular spaces like Utmost and Round Two. Our store being in the mix of it all is a healthy addition to expand the creativity that’s already here.”

October’s First Friday saw Chilalay experience its birthday grand opening, and have an amazing time. The lights from inside the store shone bright, like far-away stars in space, shedding light and emphasis on the pieces of clothing in the store… and the people inside. What we saw was not only the start of a new creative experience in the city, but also the joy that these native experiences can bring to us in times when we feel there is nothing to be happy about.

“Chilalay means to chill, and not stress out over things that are out of your control,” explains Mack. “The idea is to have a more positive outlook on the obstacles we come across in life.”

“We live by the motto, ‘If you can fix it, then fix it’,” Chilalay co-founder Nikko Suavé. “And we feel this has brought us exactly to where we are now. Don’t stress the things you can’t fix.”

Richmond’s creative culture has paved a solid path for a rising artistic revolution, a path able to withstand the trek of several other creative ventures in the city. Since 2014, there has been an explosion in talented and innovative businesses all over the city, from resourceful DIY clothing stores to art galleries open for creative usage. Richmond’s art scene is thriving as we move into 2020, and the potential is there not just for a more creative present, but for individual creatives to build a new, improved future.

Mack and Suavé — who founded Chilalay, a Richmond-based lifestyle brand, several years ago — have noticed this potential, and they’re acting on it. Where some simply admired the boom from a distance, Suavé and Mack delved deep into this local artistic revolution to figure how they can change the future of Richmond fashion with their own work. A few days before their grand opening, Mack explained how Chilalay has grown, from a brand he and Suavé started by themselves in 2012 to their current position as owners of their own store, through persistence and hard work.

“Things happen for a reason,” said Suavé. “If we rused some of the things we did in the past, we wouldn’t be here having this conversation. We always say we’d rather push things back and do them the right way, rather than rushing it and being mildly happy with the outcome. Patience is truly a virtue.”

“A lot of what we’ve manifested already has come from a consistent work ethic,” said Mack. “This is something we’ve been doing since 2012. Not everything we’ve done has been a major hit, but our consistent effort to reach that point has kept us afloat.”

Before acquiring their new storefront, Chilalay worked through numerous pop-ups around the city. Their ability to find the corners of the city where Chilalay can shine the brightest, and build from there, shows their strength as a Richmond-raised brand operating within Richmond’s artistic scene to bring not only quality clothing but a truly creative approach to the city.

For Suavé and Mack, their goal is to take Chilalay to the level of a mainstream streetwear brand, able to influence and reflect the interests and ideals of young people in Richmond and beyond. They hope to continue growing from here, doing more both within the city and in the state of Virginia as a whole, as their influence increases. And what better place is there to act as a base of operations in Richmond than Broad Street?

“Broad St. allows us to directly interact with the city at any chance we please,” said Suavé. “We’ve done several pop-ups around the city before, and we’ve had a great turnout with them. But now that we’re seated directly in the center of it all, I think it gives us a better chance to show what we have to offer. This space on Broad isn’t just for the supporters, but the entire public as well.”

But it doesn’t end with a storefront — if anything, it is just the beginning. Using their own space and additional side business, Navy Hill Co. — a screen-printing service they provide to other creative apparel groups in the city — they hope to offer other creatives who are just starting out chances to showcase their own work.

“I see [Chilalay] being used as a space for other creatives to manifest their own work,” said Mack. “We got started by doing pop-ups at different spaces, and so I hope that we can give back to the community by doing that same thing for other artists in the city. When there’s good infrastructure laid out, it’s easier to build more.”

The Chilalay store is now officially open on 212 W Broad St. from 12pm-6pm every day. Find them on Instagram @Chilalay and @NavyHillCo, and the owners at @Earl_Mack and @Youngchefgordon.

Norrin Nicholas is an independent writer/multimedia artist in Richmond, Virginia. After graduating from the University of Kentucky for Writing, Rhetoric & Digital Studies he returned to his hometown to put his writing skills to use, progressing its culture. In 2018 Norrin began creating his own self-published magazine series documenting the creatives efforts of artist all across the globe. His passion for writing is limitless, and he work ethic is nothing short of hardworking.

K-Swiss’s Clueless Shoes Are The Apex of Our Cultur...

With the release of K-Swiss's new Clueless collection, it's no longer possible to deny our cultural obsession with 90s nostalgia.... READ MORE

The Real Story Behind The Sean Wotherspoon Sneaker Releas...

K-Swiss’s Clueless Shoes Are The Apex of Our Cultur...

With the release of K-Swiss's new Clueless collection, it's no longer possible to deny our cultural obsession with 90s nostalgia.... READ MORE

The Real Story Behind The Sean Wotherspoon Sneaker Releas...