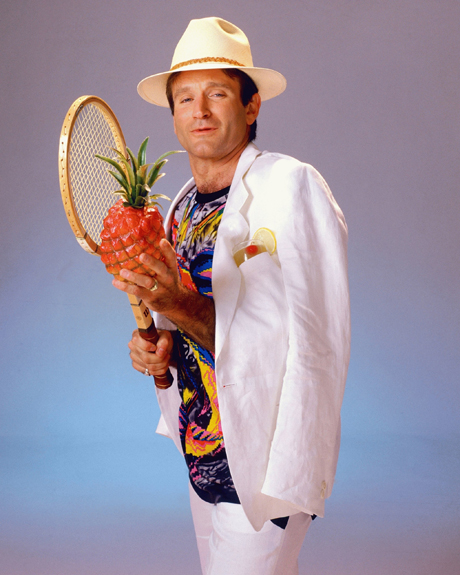 The world lost a brilliant comedian today, but there was more to Robin Williams than the laughter that he generated. He also established himself as a talented actor, tackling a diverse range of dramatic roles over the course of a rich career in show business.

The world lost a brilliant comedian today, but there was more to Robin Williams than the laughter that he generated. He also established himself as a talented actor, tackling a diverse range of dramatic roles over the course of a rich career in show business. His journey into our hearts began on the small screen, but it didn’t take long for audiences to realize that television was too small an arena for such an energetic performer. A true star, Williams was a manic treasure chest, full of energy and ready to erupt at any moment, constantly showering his fans with rapid-fire laughs and nuanced performances alike. Like the best talents, he was utterly unique and undeniably irreplaceable.

His memory will be cherished, and sifting through his catalog in an attempt to prioritize five of his movies above all others was exceptionally difficult. More so than any other Top 5 I have pondered to date, this one presents a number of quandaries, and I’m sure many will view his work differently. I was compelled to rank one picture I’m not overly fond of on this list above others I really enjoy simply because I understand the picture’s impact and recognize it as being far superior to my impression of it. Yet I also forced my personal favorite movie starring Williams onto the list at #5, bumping Mrs. Doubtfire to an honorable mention because an unheralded gem can be a finer gem than an established gem. True story.

Regardless of how you ultimately feel about this Top 5, I’m sure we can agree that Robin Williams was a phenomenal talent with an abundance of humor and vigor. Gone at 63 is certainly too soon for a man of his skill, warmth, and personality. 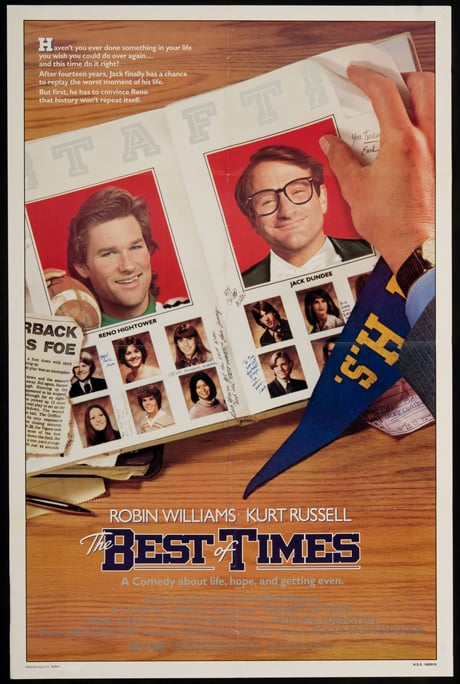 I’m sorry, Mrs. Doubtfire. Also: The Fisher King, Patch Adams, Cadillac Man, Insomnia, and perhaps even The Survivors, among others. What can I say? My earliest memories of Williams stem from his role as Jack Dundee in this heartwarming little delight from Ron Shelton, the man who would later make sports movies his domain with pictures like Bull Durham, White Men Can’t Jump, and Tin Cup. Yet I don’t find any of those films to be as heartfelt or inspiring as this fine football yarn starring Williams and Kurt Russell.

Dundee dropped the big pass the one time his alma mater, Taft, had a chance to dethrone the local powerhouse, Bakersfield, on the gridiron. This failure continues to gnaw at him years later. In fact, this botched attempt at glory bothers him so much that he goes to drastic measures to inspire his former teammates and opponents to play the game again, an improbable development to say the very least. Williams was seldom as comical as he was here, and the scene where he pays a local prostitute to listen to him bemoan his inability to catch that pass for the umpteenth time is perhaps my favorite example of his work. Russell is equally impressive as quarterback Reno Hightower, a bit of a loser who doesn’t want to tarnish his prized possession: his embellished legacy as a high school football player. Will Dundee find himself open once again as the game draws to a close, running free with a chance to nab a pass from Reno and redeem himself? What do you think? The surprising part is how much you’ll laugh along the way, and how moved you’ll be when this lovable small-town loser finally gets another chance to win big in The Best of Times.

Is there a finer example of the power of voice acting? Robin Williams absolutely owns one of the best Disney cartoons ever, perfectly portraying a genie that is equal parts wish-granting creature of myth and beloved funnyman Robin Williams. Obviously, this role was generated specifically for Williams, and this was certainly a superb decision. There can be no doubt that Williams was able to convey all the zany angst and intensity that he was known for into his voice for Aladdin, bringing the lovable Genie to life in spectacular fashion. The picture allows him to drive the bus, and he does so with glee, turning a familiar yarn into a bold and lightning-paced tour de force.

I may be overselling, but as much as he made his impact known in the realms of stand-up comedy and screen acting, I think Williams proved here that he was equally potent in the animated realm of voice acting. Aladdin is yet another animated classic from Disney, and they can produce such things in their sleep, but no Disney feature has ever been as impressive to me as the one where they gave Robin Williams the microphone and let him run wild. 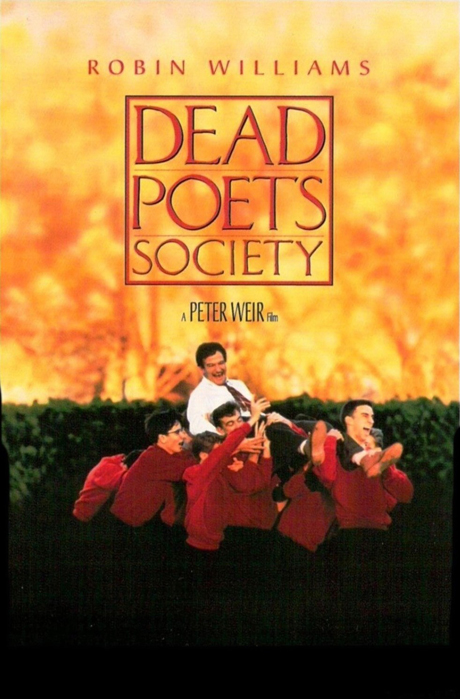 This is the one that I’m not so keen on, but that’s more a testament to its emotional impact than its quality. Look, those who know me well know I don’t dig on melancholy, and this one is loaded with the feels. Dead Poets Society will surely bring you to tears, and though it is also heartwarming and positively inspiring, there are definitely more heart-wrenching moments than I’m typically down with. Regardless, it’s a well-made motion picture that tells a powerful story. The direction from Peter Weir is sound and the performances are good across the board, though Williams towered above everyone else as John Keating, an extraordinary teacher. This coming-of-age piece is a moving depiction of one man’s passion for motivation. Keating wants to change his pupils for the better–he strives to provide them with a thirst for life and the audacity to reach for something more. Dead Poets Society is so good I’m putting it on my list even though it’s not something I frequently watch. I’m ready and willing to admit that there are some who would undoubtedly put it at the top of their own list, and I’m not going to argue that it doesn’t warrant such affection. [One of those people would include me. This movie changed my life and is my favorite movie of all time, full stop. It has a special resonance on the occasion of its star’s death, but that should just remind us all that, as the film points out, life is short and it’ll end quicker than you expect, so you shouldn’t waste a second of it. -ed] 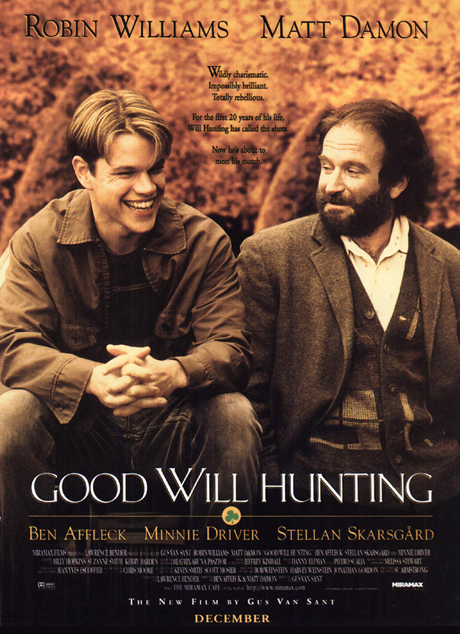 This is the movie that showcased Robin’s ability to plumb dramatic depths with the same intensity that he once brought to late-night television appearances guaranteed to have everyone talking the next day. The script is probably the real star, but director Gus Van Sant made great use of a game cast, allowing Williams to dazzle in a picture that truly belongs to Matt Damon. The initially gruff Sean Maguire emerges as a character so complex and well-drawn that only the finest of actors could dare to take on the part and attempt to offer up the performance that it truly deserved. Williams attacked it, thoroughly owning the role, proving equally as powerful here in a rich and layered performance as he did when he used his voice to transform Genie and thereby Aladdin into of one Disney’s finest offerings. I knew Williams was good before I watched Good Will Hunting. I had no idea that he was that good. He was aggressive at times, though mostly he was subtle and perhaps even delicate, and seeing him portray this character so flawlessly remains a rewarding endeavor. Good Will Hunting is a fantastic picture made all the better by Robin Williams in his greatest triumph as an actor. 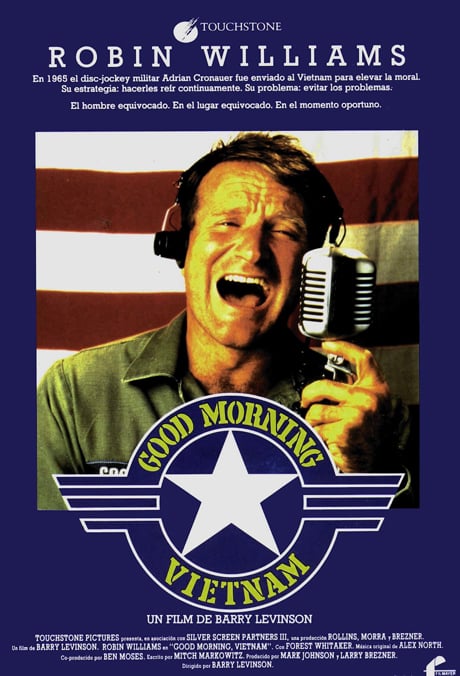 Like many, when I think of Robin Williams, the first thing that comes to mind is this movie and his take on Adrian Cronauer. The role of a fiery DJ who makes waves when he is assigned to Armed Forces Radio and brings his unique brand of humor to Vietnam was such a good vessel for Williams. Here he is presented with a comedic role with depth, a role that required him to play a zany rebel whose flamboyant antics and irreverent humor would inevitably put him at odds with the powers that be. Reportedly, Williams ad-libbed his Cronauer broadcasts, and this certainly appears to be the case. If not, these bits were expertly written for him and his delivery is perfect.

The notion of making a picture like this as a comedy is fairly daring in and of itself, but it’s a success. Williams managed to wring both laughter and emotion from the proceedings, taking the audience on a memorable journey that showcased his comic wildfire and didn’t shy away from the horrors of war, or the madness of any attempt to remain orderly and avoid controversy amid such horrors. A compelling statement and a top-notch comedy is far from an easy pairing to bring to life within the motion picture industry, but Robin Williams was able to do so in this one. The end result is a complicated and courageous tale that will likely stand as his trademark performance. I believe that the quality of the film and the dexterity Williams demonstrated in his role are of such merit that serving as such a trademark for so gifted a performer isn’t too lofty an honor to bestow upon Good Morning, Vietnam.

In closing, I just want to say that this was difficult. I was moved when I heard that Robin Williams had passed; obviously, putting his work under the magnifying glass so that I could compose this piece for RVA only served to underscore just how much his cinematic legacy meant to me. I’m a big fan of stand-up comedy and movies, and I was certainly a big fan of Robin Williams. He was a wonderful performer and he will be sorely missed. I hope you have enjoyed this Top 5, and I would love for those you who also enjoyed Robin Williams to share your thoughts.