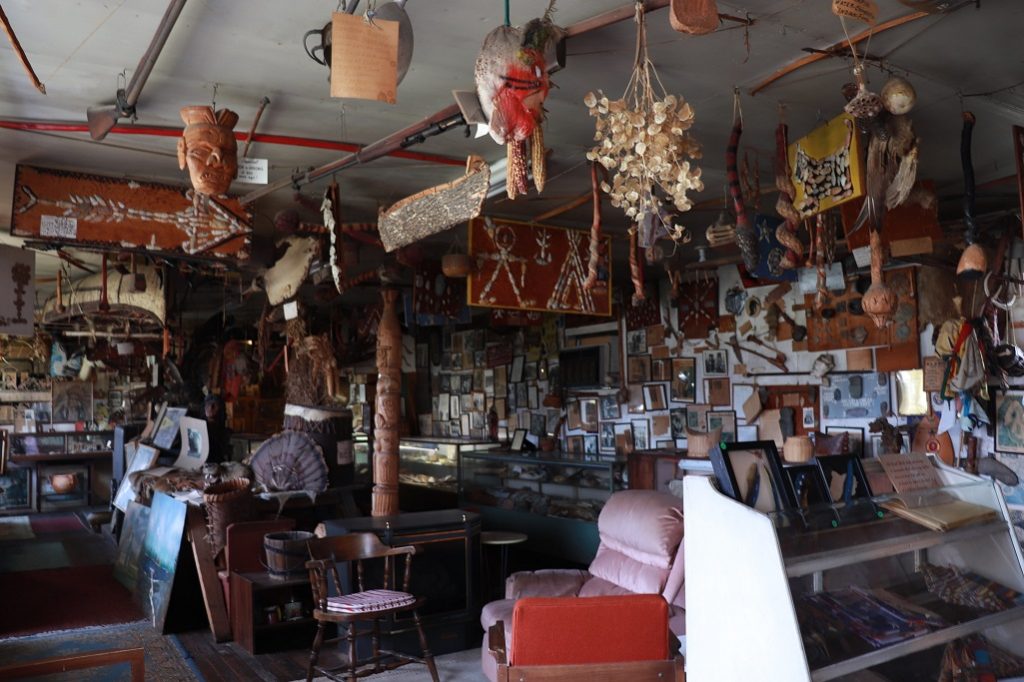 The Mattaponi Indian tribe has inhabited this area since long before Europeans arrived. Thanks to a 17th century treaty, the Mattaponi even have a reservation — one of two tribes with that distinction in Virginia. But there’s one thing the Mattaponi tribe still doesn’t have: recognition from the federal government.

“Everybody wants Indians to be acknowledged and respected,” Jack Custalow said.

Until 1950, the museum was in Chief Custalow’s house. Now it occupies its own building and is open on Saturdays and Sundays from 1-4 p.m. The museum contains artifacts such as the club with which John Smith was to be executed before Pocahontas petitioned for his life, as well as a necklace worn by Pocahontas in 1607.

Chief Custalow curated each artifact before his death in 1969. Since then, other members of the Custalow family have run the museum. George Custalow, Jack’s father, served as curator from 1995 until he died in May 2018. That’s when Jack Custalow took over the museum.

Growing up in Richmond, Custalow said he would drive to the reservation every Sunday to spend time at the museum. Now, he just walks next door and opens up shop.

The word Mattaponi roughly translates as “landing place.” The museum documents the fact that the Mattaponi Indian tribe has inhabited this area since long before Europeans arrived. Thanks to a 17th century treaty, the Mattaponi are one of two tribes with a reservation in Virginia. But there’s one thing the Mattaponi tribe still doesn’t have: recognition from the federal government.

Native American tribes can be recognized by state governments and by the federal government. Federal recognition is especially important, because federally recognized tribes receive financial aid through the U.S. Bureau of Indian Affairs.

According to the National Conference of State Legislatures, there are about 570 federally recognized tribes in the United States, as well as about 65 tribes recognized only by state governments.

“Federally recognized tribes possess certain inherent rights of self-government (i.e., tribal sovereignty) and are entitled to receive selected federal benefits, services and protections because of their special relationship with the United States,” according to the NCSL.

The Pamunkey received federal recognition through a decision by the U.S. Bureau of Indian Affairs. The other tribes received federal status when Congress passed the Thomasina E. Jordan Indian Tribes of Virginia Federal Recognition Act of 2017.

Only two tribes in Virginia — the Pamunkey and the Mattaponi — have reservations. Both reached treaties with colonial authorities in the 17th century to maintain tribal lands.

And yet the Mattaponi do not have federal recognition. “It’s a big process and takes a lot of time and money to do it,” Custalow said.

His tribe doesn’t have the funds. For revenue, the Mattaponi Reservation relies mostly on proceeds from the museum and the tribe’s annual powwow. The Mattaponi are trying to raise the funds to seek federal recognition.

“You’ve got to have somebody that goes out there to try and get donations and stuff — that’s basically the only way we keep afloat as far as this museum,” Custalow said.

A tip jar at the front of the museum is basically what keeps the Mattaponi going.

One benefit of federal recognition is that, as sovereign nations, such tribes are allowed to operate casinos.

The Virginia General Assembly recently acknowledged this when it passed SB 1126, which authorizes casino gambling in the commonwealth under certain circumstances. For instance, the legislation would allow casinos in Norfolk or Richmond, as long as they are operated by a federally recognized Indian tribe.

The Mattaponi tribe have about 450 members. Approximately 75 of them live on the reservation.

By tradition, people who live on the reservation don’t pay taxes on their land. Instead, the Mattaponi annually present the governor an offering — such as deer meat or wild duck — on the fourth Wednesday of November.

“The treaty of 1677 that we signed allowed us to live in this — because really, it was a sad situation,” Custalow said. “The Indians were told to either live on this reservation or ‘we’re just going to wipe your race out.’”

The Mattaponi Reservation originally consisted of about 770 acres. Today, it’s down to about 150 acres, including wetlands.

There used to be a free school, provided by the state, where everyone on the reservation went until eighth grade. The building was across the street from the museum. Custalow said his father didn’t have the luxury of a school on the reservation at his age.

“My dad had to go to either Cherokee, North Carolina, or in Oklahoma,” Custalow said.

Attempts to ‘erase Virginia Indians as a category of people’

In the 1920s, the Virginia General Assembly passed several “racial integrity laws.” They were intended to “to protect ‘whiteness’ against what many Virginians perceived to be the negative effects of race-mixing,” according to the Encyclopedia Virginia.

The laws were championed and carried out by Walter Ashby Plecker, a white supremacist and physician who served as the first registrar for Virginia’s Bureau of Vital Statistics.

One law, the Racial Integrity Act of 1924, prohibited interracial marriages. Using his position as registrar, Plecker micromanaged Virginia’s racial classifications, fearing that some people of color would pass as Caucasian. Among other steps, he classified Native Americans as black.

According to history experts at the Virginia Department of Education, “the laws essentially erased Virginia Indians as a category of people.”

Jack Custalow, of course, wasn’t around when Virginia enacted the racist laws. But he recalls the “era of growing up” that his father and other relatives experienced.

“It was terrible; I didn’t have to suffer through any of that stuff, but if you weren’t white, you were black,” Custalow said.

“Plecker hated the Indians. He tried to buy up all the birth certificates and take ‘Native American’ off of them and call them mulatto just because he just didn’t like Indians.”

Virginia’s law against interracial marriages was in effect until 1967, when the U.S. Supreme Court declared it unconstitutional. The law was challenged by a married couple from Caroline County: Richard Loving, a white man, and Mildred Jeter Loving, who identified as a member of the Rappahannock tribe but, according to court documents, also had African American ancestry.

The Mattaponi don’t have any laws prohibiting interracial marriage.

The tribe is governed by a council elected by its male members. The council includes five members, a chief and an assistant chief. Jack Custalow is a member of the tribal council, and his first cousin, Mark, is the current chief of the Mattaponi.

On the third Thursday of every month, the council convenes to discuss what is happening on the reservation.

Perhaps the biggest difference between the Mattaponi system and other governments is that Mattaponi women don’t have the right to vote.

“I don’t agree with it; it’s going to change,” Custalow said.

History of the Mattaponi people

When the English arrived in 1607, the Pamunkey tribe had more than 1,000 members. Along with the Mattaponi and the Pamunkey, more than 30 Algonquian-speaking tribes were led by Powhatan, father of Pocahontas.

Jack Custalow, whose grandmother is a Pamunkey, said communication among the tribes is civil. Family members span across both tribes, and they participate in each other’s celebrations.

Both tribes were involved in the Anglo-Powhatan War, which ended in 1646 with the peace treaty that established the tradition of presenting the governor with yearly offerings as an alternative to paying taxes. In 1658, the General Assembly granted the tribes the land they live on now.

The Mattaponi tribe originated from a branch of the Pamunkey but has its own community on the banks of the Mattaponi River, which meets the Pamunkey River in West Point and flows into the York River. The two tribes live across from each other on land that lies between these two bodies of water.

According to Custalow, the Mattaponi can keep whatever fish they catch as part of the 1650 treaty that they signed. They are not subject to fishing restrictions placed on the general public.

“We’ve got the cleanest fish in the state. We just try not to pollute it,” Custalow said.

Today, some members of the Mattaponi leave the reservation each morning to work elsewhere. Other tribal members rely on the reservation’s natural resources by gardening and fishing.

“Always follow the river because you can always fish, and the deer are going to go down there and drink,” Custalow said.

Events involving the Mattaponi and other tribes

Powwow: The Mattaponi’s annual powwow takes place on the third Saturday in June — the day before Father’s Day. The word powwow means coming together. Members of the tribe come together for this event to drum, dance, and raise money.

An arena is also set up for ceremonial activities, such as traditional songs and chants. The event takes place across from the museum in the middle of the reservation.

Fourth of July: The Mattaponi celebrate the Fourth of July by inviting friends and family members to the reservation. The night starts out with a cookout, followed by a cornhole tournament.

“When the sun sets — big fireworks on the river,” Custalow said.

Custalow’s cousin runs a food truck in Richmond called the “Hungry Hungry Arrow” that also comes for the Fourth of July celebration.

Traditionally, many tribes choose not to participate in the holiday because of historical conflicts with the United States. However, the Mattaponi and other tribes celebrate and participate in the festivities by putting their own spin on it.

Film festival: “Native culture is rich, steeped in history, and multifaceted, yet mainstream films do not often capture this nuance,” the event flyer reads.

On Nov. 21-24, the Byrd Theatre in Carytown will host the third annual Pocahontas Reframed “Storytellers” Film Festival. The event will feature more than 20 films. Past submissions can be viewed online at pocahontasreframed.com.

The American Evolution, an organization dedicated to commemorating the 400th anniversary of various historical events that happened in Virginia in 1619, coordinates the film festival.

By telling the stories of indigenous life, the American Evolution hopes to honor the contributions of Native Americans and foster conversations about their lives.

Over 30 years after Virginia's (and the nation's) first Black governor, L. Douglas Wilder, was elected, a Black woman has still not been... READ MORE

Over 30 years after Virginia's (and the nation's) first Black governor, L. Douglas Wilder, was elected, a Black woman has still not been... READ MORE