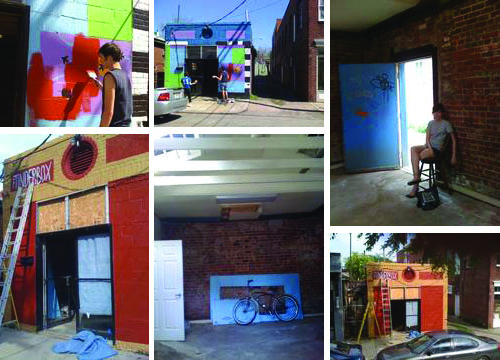 Our plan was simple. We would find a big house that we could all move into. We would do shows out of our gigantic soundproofed basement. Our neighbors would be young music enthusiasts who would not only tolerate and encourage our efforts, but they would praise us, beg us for more. The city council would catch wind of our operation, and begin taking measures to provide us with additional funding so we could purchase a professional sound system, install a bar, and build a stage. The mayor would give us the key to the city for our honorable contribution to the arts.

Our plan was simple. We would find a big house that we could all move into. We would do shows out of our gigantic soundproofed basement. Our neighbors would be young music enthusiasts who would not only tolerate and encourage our efforts, but they would praise us, beg us for more. The city council would catch wind of our operation, and begin taking measures to provide us with additional funding so we could purchase a professional sound system, install a bar, and build a stage. The mayor would give us the key to the city for our honorable contribution to the arts.

We searched for an appropriate new home for weeks, finding nothing. The stresses of being without a home were getting to be too much, and when we finally found a house where Max, Oliver, and I could live comfortably and affordably, even though there was no hope of ever doing shows there, we took it. It was a fairly large house about a block away from the one that had burned down. It was old, and creaked, and the floors were uneven, but it would do. When you’ve been homeless for weeks you’d be amazed and how little certain imperfections mean.

So, our plan failed. We never found our dream house. We did, however, find a small, one room brick building in the middle of the Fan. I mean really small – about 380 square feet. With some careful budgeting, Max, Harris, Ramey, and myself decided we could afford it. Max and I went through a bit of trouble trying to get our security deposit back from our old landlord, who seemed to have arrived at the novel conclusion that the fire was (somehow) our fault. After some gentle persuasion, however, he came around and gave us our money. A few weeks later we signed the lease. Because it was a commercial space, and not our home, the possibilities were much more broad than just doing concerts. We could do art shows. Bicycle safety seminars. Feminist health workshops. This wasn’t just going to be a venue; it was going to be an all inclusive community space. A launching pad for the revolution. Inside of its cracked walls we could build a stronger community. It was everything we had ever wanted for our town. Before long, it was painted and we were in the process of booking shows and registering the building with the city. The Tinderbox Art Space was underway.

Our first event at the Tinderbox was a moderately attended seminar on the Employee Free Choice Act. A highly motivated young union organizer led it. We listened to what he had to say and then had the option to write letters to Senator Mark Warner voicing our support (or lack thereof) of the act. Everyone in attendance seemed really excited about the space. In the weeks that followed public excitement about the space grew. We started getting ten emails a day from bands who wanted to play. We found young artists in the community and started arranging to do shows with them. As all of this was happening, we were trying our best to get the building approved and register as an official business with the city. This proved to be near impossible to do. We had our landlord rebuild the bathroom wall because it was ruined from termite damage. The city, in turn, informed us that we would have to:
A: Rebuild the bathroom entirely, making it larger.
B: Resurface the floors.
C: Repair damage to the bricks outside.
D: Apply for a permit to do electrical work.
E: Rewire the buildings electricity
F: Repair the roof and
G: Provide eight parking spaces.

Think about that last one for a moment. Eight parking spaces. For a building the size of a living room. I think that this particular demand would suggest that the people at City Hall are a little bit…out of touch. I’m trying to be nice. I’m trying really hard. It’s just frustrating that a zoning law with little relation to reality or practicality can hold back a project as simple and well-intentioned as a community art space.

We decided to press on with our project. Two months went by without incident. We continued to fix the place up during the day and host touring bands at night. We received several noise complaints, and decided that out of respect to our neighbors we would only do loud shows on weekends. We would reserve weeknights for acoustic shows and art openings. The emails continued to come in, and we scheduled an average of three events a week for a three-month span.

Everything changed in May, when we received a phone call from a friend letting us know that our friends at Rumors Boutique were being taken to court for not paying taxes on the donations that had come through the door when they had bands play the store. A fifteen-man task force with members of the Richmond Police Department, the Fire Department, and city zoning and building inspectors showed up at the store and presented Casey, one of the owners, with a summons. That same night, a boy who had been letting bands play in his basement was served a summons to court by the same task force. He was charged with running a business without a license.

After doing some research, we found out the task force was operating under a program called CAPS created eight years ago that was originally intended to break up crack houses and other undesirable elements of Richmond communities by finding building code violations. They must have fixed the drug problem in Richmond, because their program was now being used to investigate businesses and citizens who were promoting the arts in unfit ways.

For us at the Tinderbox, this meant big trouble. We knew that it was only a matter of time before this misguided justice league set their sights on our little space and its deplorable lack of parking spaces. We had to pull the plug on the entire operation, effectively cancelling twenty-seven musical performances and a handful of art events. Our dream had been snatched away.

The night that we decided that we could no longer continue at the Tinderbox, Max asked me, “Where do we go from here?” It’s hard to look ahead when every time you pick yourself up something comes along and knocks you right back down. In a three-month span, we had lost two buildings that held everything. One of them burned down, taking all of our possessions with it. The other was ripped away by an out-of-touch bureaucracy, taking our hopes and dreams for the future. So where do we go from here?

We rebuild. We plan for a war and we take it to them. We will win because we are unrelenting bastards who know that there are more important things in life than parking spaces. We are motivated. We are intelligent. We have an entire community behind us and we are pissed off – all of us. There is a spark inside of us, and it will turn into a blaze – a raging inferno. Hellfire and damnation will rain down on anyone who dares to stand in our way, and from the ashes we leave behind there will come something better.