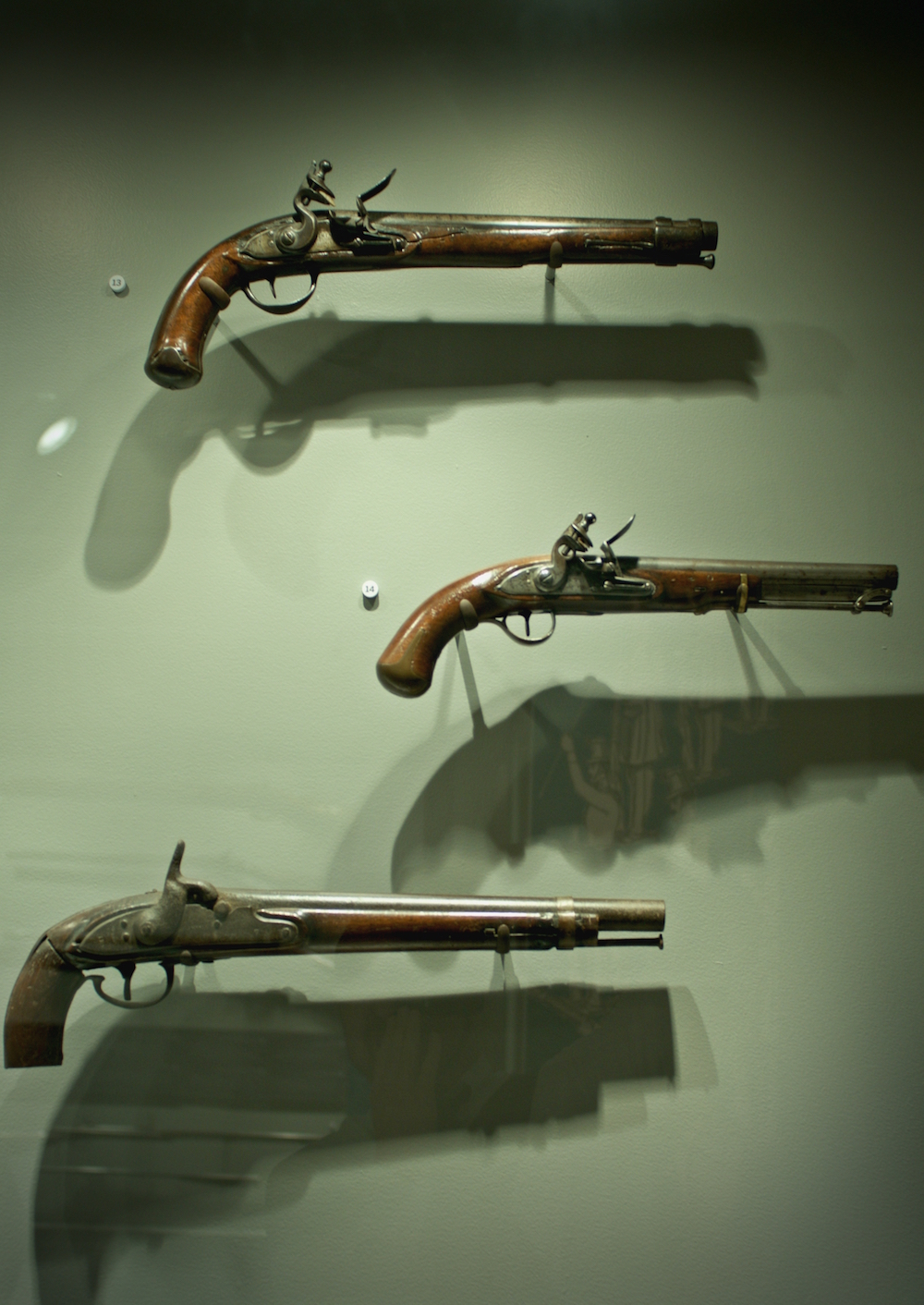 The Virginia Historical Society’s most recent addition entitled “Arming the Commonwealth” displayed a unique variety of weapons, munitions, and accessories manufactured and used in the state of Virginia during some of its most important and historical moments.

The Virginia Historical Society’s most recent addition entitled “Arming the Commonwealth” displayed a unique variety of weapons, munitions, and accessories manufactured and used in the state of Virginia during some of its most important and historical moments.

“It took over a year for the museum to acquire, research, and assemble each of the weapons,” said Andy Talkov, Vice President of Programs for VHS. ”There is an inherent beauty to each of the pieces.” 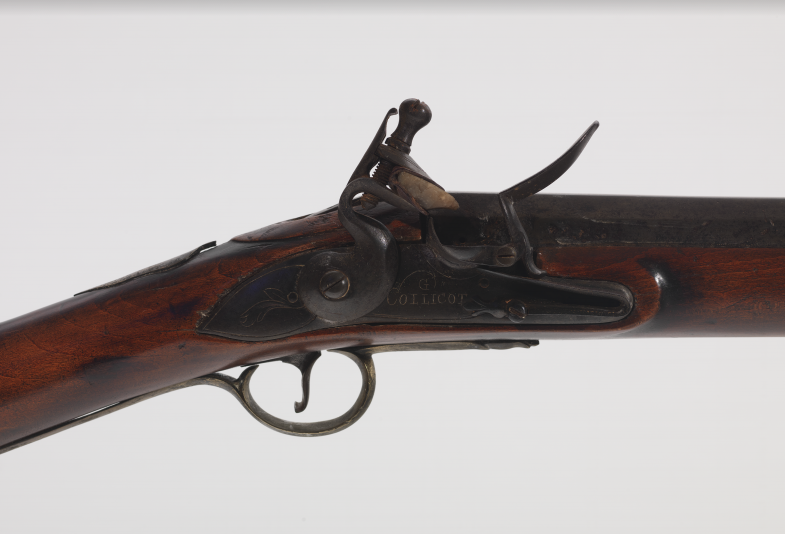 Each item displayed in the exhibition are given a timeline-like description which allows patrons the opportunity to better understand at what point in our nation’s history these artifacts were made. Richmond served as a critical staging ground for the development of weapons during many of the military conflicts of the 1800s. It was critical not only for advances on the Union capitol of Washington D.C. during the Civil War, but also as a hub for all supplies, ammunition, and weaponry to be distributed to each of the numerous battlegrounds.

Several maps and references make note of Harper’s Ferry being a vital location for the manufacturing of 19th Century weaponry, and according to Talkov it wasn’t until the military engagement there that the remaining resources were transferred over to the Virginia Manufactory of Arms in Richmond.

“John Brown’s raid on the arsenal at Harper’s Ferry forced the Confederate army to relocate several key components of their manufacturing machinery to the southern capital,” Talkov said. “Several of the pieces within this collection are put together from scraps acquired from both munitions factories.” 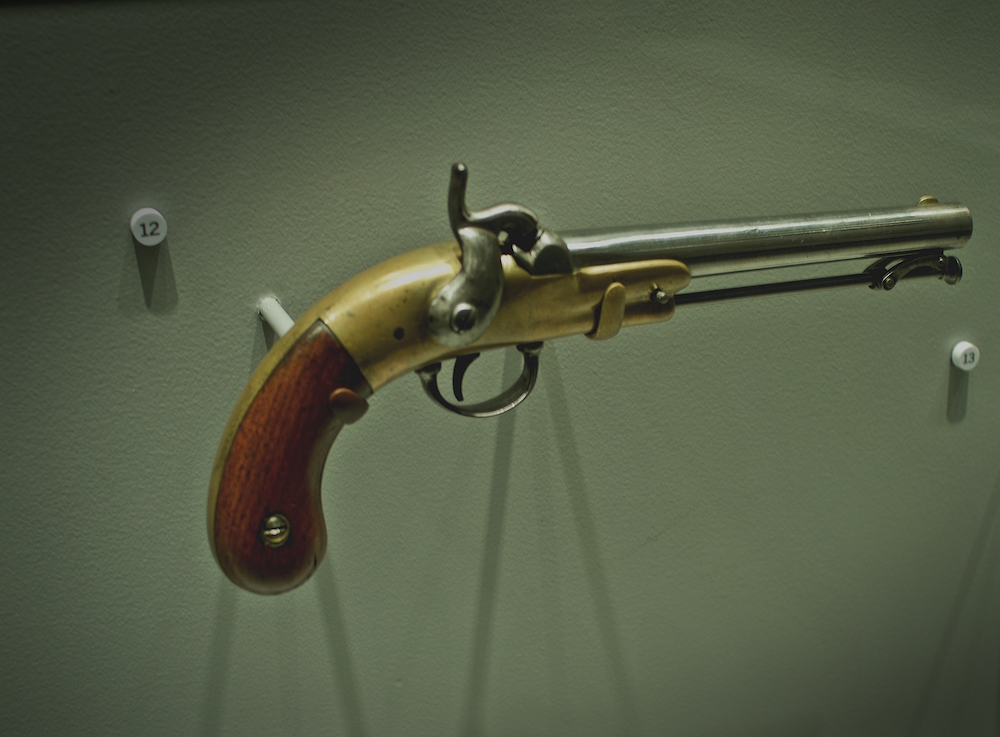 But the Civil War isn’t the only historical event these weapons are representatives of. The evolution of all Virginia’s weaponry dates back to use of flintlock pistols and rifles, that served in the defense of one’s land and in some cases honor.

“Guns were not always just used for the defense of one’s life or property,” said Andrew Talkov, Vice President of Programs at VHS, during a tour of the exhibit. “As civil disputes became more prevalent with the growth of the local populace, many saw dueling as a legitimate means of instilling justice.”

Displayed on one of the wall mounts are a pair of pistols that were used in one such famous duel, where two men had been at odds over the publication of slanderous gossip regarding a mutual love interest. “A lot of these conflicts were arranged by representatives from both parties,” says Talkov, on the subject of dueling as a solution to civil strife. “If the seconds had been better at their jobs, many of these conflicts could have been avoided.” 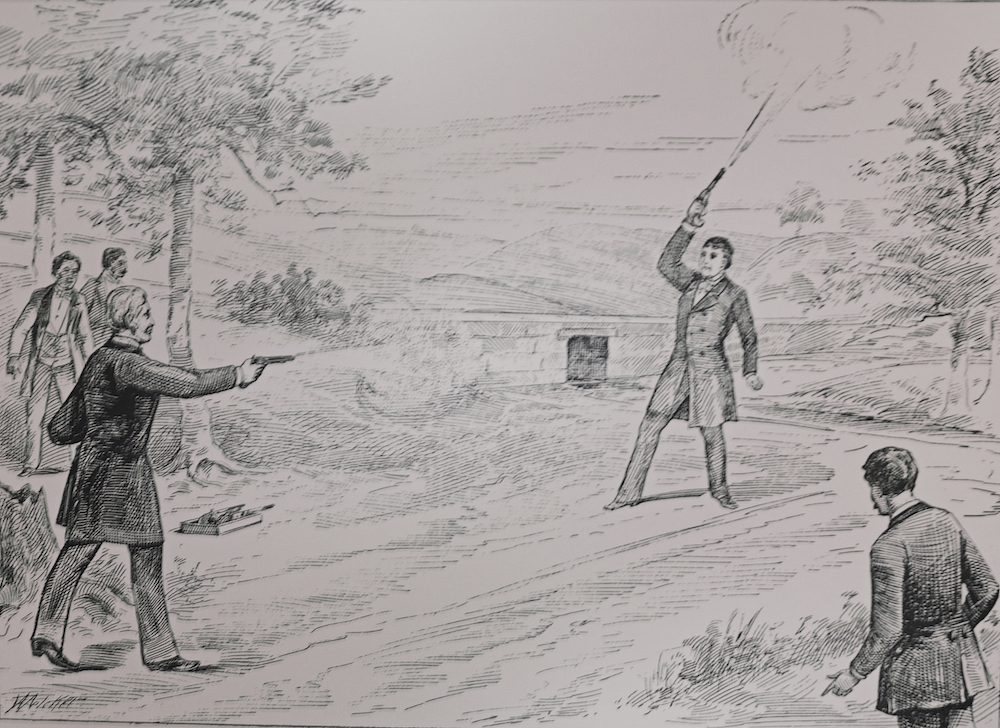 It wasn’t until 1810 that Virginia finally passed the Anti-Dueling Act.

“The practice still continued until the 1880s however,” says Talkov,”and it was only because of the improvements in firearm technology that people finally begin to see dueling as cold-blooded killing as opposed to a method of solving personal disputes.”

Included in the exhibition is a section dedicated to the weapons that revolutionized hunting as a sport rather than a necessity. With the influx of secondhand weapons, anyone could start collecting and modifying their own arsenal. One particular piece that drew the eye was a restored Whitworth rifle with the bullet presented beside it.

“These rifles were unique in that they had a five-groove barrel and a 1-in-48″ twist,” Talkov said. “That gave the bullets a further stabilized flight pattern.”

“Hunting for sport has contributed immensely to the development of more advanced forms of consumer weaponry,” Talkov said. “And it’s not only the weapon technology that has seen these advancements. Ammunition as well as the different aesthetic aspects of the firearms all came about because of the desire to build off of what was already established.”

And while each portion of the exhibit focuses on separate stages of weapon development and use within the commonwealth of Virginia, it is important to note the similarities each of them have as they progressively become more modernized.

The next guided tour with Andrew Talkov is scheduled for November 9th, and all information regarding times can be viewed through the Virginia Historical Society’s website.