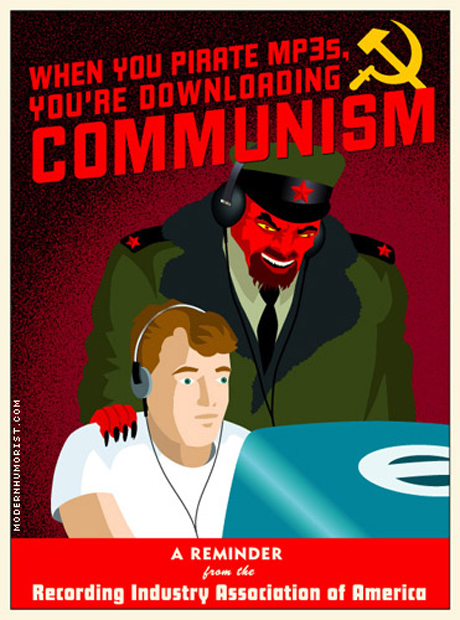 Baiting the Public: The RIAA is Watching You!

Why the hell is this still happening? Why, after nearly a decade of structural decay and paradigm shifts, I’m sitting behind my laptop writing about KaZaA? I’ve never shied away from discussing the lopsided copyright laws that the RIAA and other major labels have used to attack and alienate their clientele, but things are becoming absurd. The recent $192,000,000 judgment leveled by the court against a 32-year-old woman from the Midwest hit me with barely a whimper. Sure, the press ate it up, but here’s the thing : IT DOESN’T FUCKING MATTER ANYMORE.

Why the hell is this still happening? Why, after nearly a decade of structural decay and paradigm shifts, I’m sitting behind my laptop writing about KaZaA? I’ve never shied away from discussing the lopsided copyright laws that the RIAA and other major labels have used to attack and alienate their clientele, but things are becoming absurd. The recent $192,000,000 judgment leveled by the court against a 32-year-old woman from the Midwest hit me with barely a whimper. Sure, the press ate it up, but here’s the thing : IT DOESN’T FUCKING MATTER ANYMORE.

For those who are unfamiliar with exactly where we are and how we got here, I’ll give you a quick recap: The Recording Industry Association of America was initially formed to help the collective progress of music technology and to protect the interests of the labels and music-related companies that comprised its affiliates. KaZaA, on the other hand, was created as a conduit for file sharing which included bundles of spyware and adware as an added bonus. In the early 2000s, the RIAA decided that the best way to deal with these wayward and thieving fans was to sue their pants off in order to send a strong message that there were feasibly horrendous consequences to downloading songs by your favorite artists without paying for them. This most recent judgment, which breaks down to roughly $80,000 per song, is anachronistic. Jammie Thomas, the defendant, has refused to settle with the RIAA, and as a result has found her fine increased from the $222,000 settlement leveled upon her in 2007. The fact that the fines are getting larger merely heap on the irony of the case, considering the current public standing of the RIAA.

Nearly a decade ago, when industry giants were bathing in money coming in from Britney Spears and N*Sync, things were a bit more cut-and-dry. There was still a strong industry to defend, and as artists spoke out against their fear of binary code and burned CDs they gained a bit of a sympathetic ear. Big Labels were still considered evil, and the Us vs. Them battle seemed to carry some weight in the media. Lars Ulrich still commanded attention during press conferences and inspired spirited debate. Digitizing media was still something that bewildered a lot of America, and John Doe hadn’t yet procured the technology to rip his Netflix rentals onto his laptop. As the decade wore on, it became obvious to everyone that digital culture was expanding its gravitational pull and physical media sales began to plummet. That’s when college students, the elderly, and suburban housewives began to be sued by corporate giants and things became a bit more opaque. Even as these trials wore through dismissals, settlements, and the inevitable media circus, CD sales continued to crash, and the public all bought iPods (and apparently a Zune, as well – I saw one once) and went about their merry way, downloading torrents and zipped files of every album they could think of. Time passed and now we have these judgments rendered in cases that have gestated in the system for years, becoming increasingly irrelevant. How in the hell does the RIAA still have the money to deal with these things in court? The battle is over. I’m absolutely baffled as to what they think they’re going to win with this. You cannot reverse anything that has happened. People are not suddenly going to run towards the industry-approved light because of some astronomical figure they see on the front page of CNN.com. The culture is in place and thriving. Who needs KaZaA or any kind of P2P anymore when Google has fashioned itself into a hotbed for music piracy? Try searching for any album of your choosing, followed by the words “Mediafire” or “Megaupload”. Congratulations! You’ve just acquired Neil Young’s entire discography in one fell swoop. The RIAA can’t sue your way into the past. The American legal system is not a time machine unless you’re dealing with gay rights or abortion.

A few years ago, when these suits were in full swing, the RIAA created a website on which defendants could settle en masse for as little as $3,000 per case, since college students aren’t exactly rolling in cash to spend on court fees. This is mind-boggling. These are absurd “lessons” that simply wore away at any goodwill left towards the industry. Who wouldn’t pirate music with glee after forking over thousands to some faceless conglomerate who demonized you in the process? The defendant, Jammie Thomas, doesn’t have the resources to deal with this kind of money, and it’s not likely that she’d be able to pay a lesser settlement. Even once this is likely struck down on appeal, she’ll still be stuck with court fees for downloading Richard Marx songs (who, interestingly enough, condemned the judgment – http://www.rollingstone.com/rockdaily/index.php/2009/06/24/richard-marx-ashamed-hes-linked-to-192-million-riaa-fine-against-minnesota-mom/)

The industry is simply lobbing stones from a ship whose mast is barely above water. The Billboard Charts are a pathetic reminder that sales are shrinking to a mere fraction of what they once were, allowing labels like Sub Pop, Matador, and Anti- to be labels with albums in the top ten. Multi-million sellers are a thing of the past, and the idea of a unifying force in pop music has all but evaporated in the past decade. Niche markets are now king. Music magazines are folding left and right, with the venerable Rolling Stone cutting its size and page count while MTV cries and sputters its way into obscurity via The Hills and almost self-effacing online “specials” on new scenes. Major labels aren’t the enemy anymore, they’ve just become irrelevant. Gone are the stereotypes of the A&R shill telling bands to make things “more commercial.” Who makes hits anymore? Aside from established R&B stars and Lady Gaga, major labels are hemorrhaging money on their artists and burying themselves with each transaction. The return for the industry was never really spectacular, but they’ve reached a point where the only place they have a chance of ending up in the black is with ham-fisted lawsuits. Sure, Black Eyed Peas have the #1 album in the country, but what they’re selling is less an album of songs than twenty-second snippets for Target and movie trailers. Remember when everyone balked at Moby’s licensing frenzy after Play? This dwarfs that. Why even put out a record? You’re writing jingles. At least then I won’t have to worry about accidentally hearing three minutes of your shitty auditory Pap smear at my local retail outlet.

Radiohead, Sonic Youth, Pearl Jam, Nine Inch Nails, and countless others have dropped out of the world of the majors simply because there’s nothing necessary anymore. The idea that a major label somehow provides any sort of security or advantage over an indie based out of a tiny office has simply evaporated. None of this is meant to imply that I am in any way nostalgic for the way things were, but there’s almost a sense of tedium to covering this kind of court decision. The game is over. The RIAA can’t realistically expect money from this woman, and went so far as to come out with a statement saying just that. My question is this: why in the hell would you publicize a decision that simply reminds the populace how insidious and ineffectual of a group you are and then tout it as something that’s primarily a symbolic judgment? At the crux of it is the same ineptitude that buried them in this hole. A lack of foresight, technophobia, and lingering nostalgia for the coke headaches their expense accounts afforded them in the ‘90s thanks to Stone Temple Pilots and Alanis Morrisette.

I think that when we look back on this in two years, we’ll see it as the last gasp of an industry that has already irrevocably changed. Major labels are shitting out eleventh-hour reissues on the nearly buried CD format and having their flagship artists brush them off in favor of new media. The public learned long ago that their money was just barely trickling down to the artists, and now that they’re leaving en masse, there’s not even a wisp of sympathy for all the lawyers and middlemen who are scrounging for cash by trying to steal it from the cold dead hands of the market, or a Midwestern housewife.

For a brief history of how the industry ended up mired in this kind of bullshit, I kindly direct you to Steve Albini’s infamous “The Problem With Music” (http://www.negativland.com/albini.html)