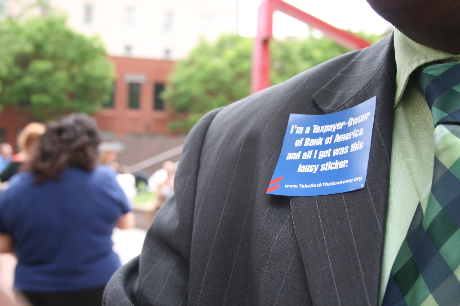 My account balance is $-73.60 and I’m standing in Bank Of America, arguing with the teller over the $70 in overdraft fees that put it there.

My account balance is $-73.60 and I’m standing in Bank Of America, arguing with the teller over the $70 in overdraft fees that put it there. Having worked in customer service, I’m desperately trying not to scapegoat an employee of the company at fault. She’s not exactly facilitating my cool though, which has already been derailed by the obtrusive sterility and general ambiance of commerce and unwritten protocol. During the two years since I opened my account, it seems that BOA has been reflecting my pending transactions in my balance, and then fining me when they go through after a subsequent purchase dips my funds (pending transactions accounted for) below zero. I’m no accountant, and am admittedly mathematically disabled (to be PC about it), but something’s not right. One miscalculated bar tab shouldn’t cause all of the transactions made the day before to accrue overdraft fines.

Through the window I can see a small congregation of sign holders attempting dialogue with the downtown lunchtime foot traffic. A clear indication of protest, which is something I’m predisposed to support, teabaggers aside. On my way out, pissed off about failing to debate my money back, I am handed a flier by one of the demonstrators. I’m immediately struck by two realizations: the first is that I happen to have narrowly avoided arrest with this guy at antiwar rallies. The second is that my struggles with my soon to be ex-bank are not unique.

Towards the top of the info sheet in my hands is an emboldened list of grievances against BOA, the first of which is “Unreasonable Bank Fees”. It states that in 2008 the company received 66% of it’s noninterest income from credit cards and fees paid by individuals and small businesses, and that BOA “recently agreed to pay $35 million to settle a class-action lawsuit that claimed the bank manipulated customers’ bank accounts to increase overdraft fees.” Holy shit I was right! And Why was I not informed of this? are my initial reactions.

Fewer things insight my increasingly latent anti-capitalist disposition more than learning that I have been unwittingly abetting a megalithic, corrupt institution in their efforts to exploit the vulnerable. Forget that they have been routinely fucking me over since January 2007, I could have left and I didn’t. But coming to find, while standing at the cement feet of a towering fraud, that MY bank “collected an estimated $248 million of Social Security funds from the accounts of elderly and disabled customers in order to get bank fees” between 1993 and 2003, effectively resurrects my inner fist-the-system-anarcho-punk rage.

But this is not a partisan issue, which is clear by the fact that other than my former partner in dissent, the majority of the protestors on Main St. today are not the stereotype of angst-driven riot porn addicts, but average middle aged citizens. These are people who are affected by the practices of the institutions they are standing against, not politicos with relevant agendas. They are here to cultivate discourse, not engage in civil disobedience. Of course this doesn’t seem to matter to most of the passerby, who adorn blinders at the sight of anyone with a clipboard or sign. Apathy is timelessly stylish, I suppose.

If the lack of governmental intervention in the face of such an incensing, greed driven conspiratorial manipulation of the public isn’t astonishing, the fact that BOA received $45 billion in TARP bailout funds, so as to continue their deceitful practices, should be. If you pay taxes on anything, that used to be your money. On top of that, CEO Ken Lewis, at the helm of the company since 2001, still has his job. Which brings us to why the protesters have a plastic box with “Vote Here” written above it: as taxpayers, and therefore shareholders in BOA, they are calling for his resignation. I donated my Hancock to the cause.

The Service Employees International Union, or SEIU has led the charge against Ken Lewis and BOA. Their accusation is that despite frivolous administrative spending (such as the maintenance of an unconscionably large fleet of aircrafts, and unreasonably large salaries/bonuses for high level officials) and their ubiquitous role in the subprime lending crisis, BOA has not been held accountable for their actions. I would argue that the fact they’re still in business, largely because of taxpayer’s money, is a clear indication that SEIU has their facts straight.

As the economic crisis spreads it’s ominous fingers through the shallow financial reservoirs of independent business and the citizenry, an urgency to reprioritize our national perspective of wealth and investment is intensifying. The ancient and crumbling philosophy of concentrating resources in the cavernous reserves of a few powerful banking centers has proven itself to have been built upon the insubstantiality of short-sighted greed, and begs not reformation, but abolishment. This may seem a daunting task, especially in a city where the skyline is tattooed with the names of banks that differ more in those illuminated logos than the practices undertaken within the walls they adorn, but it may not be as difficult as it seems. A company that makes the majority of it’s non-interest income from fees collected by individuals and small businesses doesn’t require an attack to cause it’s collapse, it requires us to stop patronizing them. It’s built on our backs. All we have to do is step out from underneath. Now if you’ll excuse me, I’m going to close my bank account, and file as a claimant in the class action lawsuit against the Bank Of America.

For more information on sticking it to the man, who in this case happens to be Ken Lewis, visit http://freechoice.seiu.org/page/s/bankofamerica