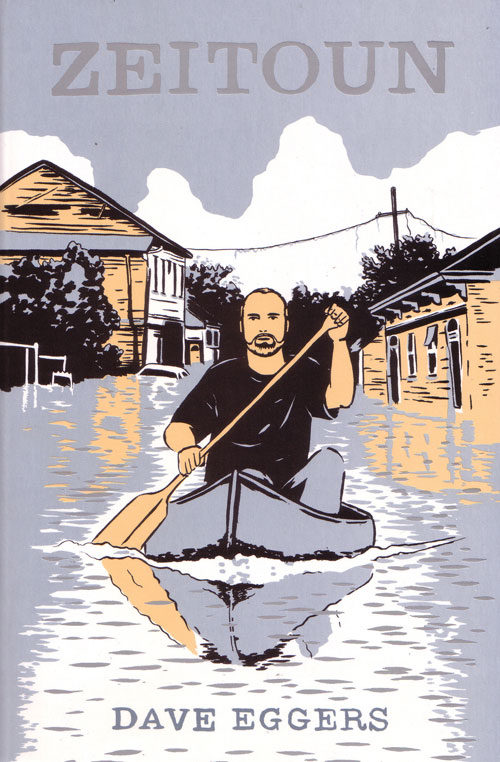 He had warned her repeatedly that they could both be put in jail, or he could be returned to prison. Anything could happen. Anything had happened. (An excerpt from Zeitoun)

He had warned her repeatedly that they could both be put in jail, or he could be returned to prison. Anything could happen. Anything had happened. (An excerpt from Zeitoun)

It seems as if ages have passed since my initial discovery of author Dave Eggers. It was a Friday in the fall of 2005. I had a long wait ahead of me in the greyhound terminals of Norfolk, Virginia. Soaking wet, the only dry possession I had on me was a paperback copy of A Heartbreaking Work of Staggering Genius. This would be the memoir with touches of fiction that helped introduce the literary world to Eggers. I became a fan instantly. The charm of his writing was his ability to satirize popular culture while instituting a unique, intelligent sense of humor. A sense of humor that found itself imitated by peers and young authors alike for years to come.

He truly hit a fascinating stride with the release of his work What is the What. In this novel, he examines the life story of Valentino Achak Deng. Deng was a member of the Lost Boys of Sudan program. This novel helped put a face to the news stories that many casually saw, but never dug beneath the surface. This would prove to be the beginning of a new transition for Eggers.

My discovery of his new work Zeitoun was exciting. I knew little about this book except that it was an extension of the McSweeney’s project called Voices from the Storm, a collection of perspectives from the citizens of New Orleans concerning Hurricane Katrina.

Zeitoun is the story of Abdulrahman Zeitoun, a Syrian-American businessman. With news of a tropical storm on its way, Abdulrahman decides to remain in New Orleans despite the wishes of his family. As the city becomes flooded, he travels across the waters in a canoe attempting to comprehend the damage done. While quietly grazing above the city streets, he does his best to help the remaining survivors and understand what remains of his beloved city.

The scope of Zeitoun is most effective when it jumps between the perspectives of Abdulrahman and his wife Kathy. It allows the reader to see how the news presented the events occurring in the city and how Abdulrahman witnessed what was really happening. With the news reports feeding out of Louisiana, immediate concerns of Abdulrahman’s ability to survive become a large focal point. In a city flooded in poisonous water as well as the crimes of theft that surround him, Kathy has to remain strong for the sake of her family. Facing the reality that she may never see her husband ever again. This reality slowly tears away at her mentally and physically.

This becomes a large question for the reader throughout the book. It makes one wonder how much they really know about what happened in 2005 during this decade’s second horrific tragedy.

An awful reality is brought to light when Abdulrahman is wrongly arrested and prosecuted by the National Guard. This book doesn’t hesitate to address the fact that the stigmas of a post-911 America were still very much intact. Upon the discovery of Abdulrahman’s shelter by the authorities, they jump to extreme conclusions. They instantly assume he must be a looter and even worse, he must be a member of a terrorist organization. What follows is absolutely heartbreaking and terrifying to conceive. The atrocities committed to any man or woman that is a legitimate citizen of this country are unimaginable. The effects to Abdulrahman and his family will forever remain associated with this time of despair.

While comparing this work to What is the What, a few things become apparent. Eggers spent a long period of time researching and developing both projects. He had several more resources to work with in regards to Hurricane Katrina as opposed to Sudan. In Sudan, there were a number of years where there was absolutely no news being released from that area. With New Orleans though, Eggers had the resources of Abdulrahman’s memories and the media artifacts derived from the exploration of multiple news outlets. Each one had an assortment of media including text, video and photographs of the tragedy. It is most likely the reason why a distinction exists between the two works as a book and a novel. While everything in What is the What is a real account of Deng’s experiences, there isn’t a master calendar that succinctly ties each detail and event together. Not in the way Zeitoun maintains its timeline. In no way does this suggest that either work is lacking in how effective of an ability it has to tell it’s tale. Eggers still maintains a unique sensibility for storytelling.

Over the course of a few cups of coffee, a friend and I discussed Eggers. After making a comment about the book and a brief synopsis, he developed an interesting parallel. He felt as if Eggers was slowly becoming an author akin to Truman Capote. In doing so, he has exceeded the expectations of his readers. Starting to grow towards an equally effective ability of telling the tales of others whose voices may not be heard otherwise.

This is a powerful work. It conjures up a whirlwind of emotions about several pertinent topics that plague the nature of this country. The decision to focus the effects of the event on this particular family was a smart move on Eggers’ part.
If you are a fan of Eggers, this book shouldn’t disappoint. If you are fascinated by a human story that took place during the calamity of this hurricane, you will take a lot away from it. If you want to take something away from the next book you pick up, make sure to keep Zeitoun in mind.

The Zeitouns were conflicted about what they heard about Lima and Gonzales. On the one hand, knowing that these two police officers had not purposely hunted and arrested a man because he was Middle Eastern gave them some comfort. But knowing that Zeitoun’s ordeal was caused instead by systemic ignorance and malfunction – and perhaps long-festering paranoia on the part of the National Guard and whatever other agencies were involved – was unsettling. It said, quite clearly, that this wasn’t a case of a bad apple or two in a barrel. The barrel itself was rotten. (An excerpt from Zeitoun)

NOTE
A large portion of the proceeds from Zeitoun will be given to the Zeitoun Foundation.

This was taken from an interview conducted with author Dave Eggers where he explains in greater detail where the proceeds will be headed:

Dave Eggers: A portion of the proceeds of the book will go to the Zeitouns themselves. They have five kids, and I wanted to be sure they would all be taken care of for college. And we’re planning to give some to those arrested with Zeitoun. The state of Louisiana is unlikely to compensate these men for their wrongful conviction, so we’ll do what we can. The brunt of the proceeds, though, will go to the Zeitoun Foundation. The Foundation is a very simple grant-giving operation. It will take the proceeds of the book and then distribute them to a number of nonprofits, most of them working in New Orleans. I was able to visit a number of them recently and they’re doing fantastic work. And we’re at a juncture in the recovery of New Orleans that a lot of us elsewhere in the country might assume that all is well again in New Orleans, the recovery is complete, etc. But this is the time when they need new funds, an influx of interest and support. So we’re hoping to contribute to the ongoing work of Rebuilding Together, the Porch, The Green Project, the Innocence Project, and others.

To acquire a copy of Zeitoun, previous works by Dave Eggers or any McSweeney’s release, please visit store.mcsweeneys.net (or you can stop by Chop Suey and see if they it in-stock or if they can special order it for you)

For more information about the Zeitoun Foundation, the family and the affiliated nonprofits that are being benefited by the proceeds of the book, please visit www.zeitounfoundation.org

For more information about the series of books entitled Voice of Witness (in which Voices from the Storm stemmed from and subsequently Zeitoun), please visit www.voiceofwitness.org