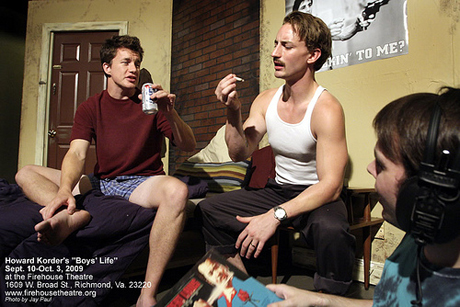 The curtain doesn’t rise on my life. This is because in a black box theater, there is no curtain. But the opening scene, an unmade bed presiding over the ruble of crumpled PBR cans and scattered records, pizza boxes and bourbon bottles, Robert Redford straddling his motorcycle and the American Dream, grinning from the Easy Rider poster on the wall, are of the nature of things that comprise the wake of my existence.

The curtain doesn’t rise on my life. This is because in a black box theater, there is no curtain. But the opening scene, an unmade bed presiding over the ruble of crumpled PBR cans and scattered records, pizza boxes and bourbon bottles, Robert Redford straddling his motorcycle and the American Dream, grinning from the Easy Rider poster on the wall, are of the nature of things that comprise the wake of my existence. Jack lights a joint and contemplates manhood from an ageing and cushioned chair, Don sits on the bed, swilling beer in his boxers, Phil reminisces half memories as the records turn slowly in the timeless oblivion of a drunken camaraderie. The drywall is stained with dirt and mold, exposed brick dividing the color of decomposing apartments.

Boys’ Life is about the morality of sex, the desperate grab for identity that is the undertaking of that contemplative stretch of years comprising the second half of your twenties. The three male protagonists feel more like contradictory aspects of a singular personality than individuals, but this could likely be blamed on my own ability to relate to each of the divergent characters despite their conflicting perspectives.

Jack, played with compelling honesty and flawless talent by Joseph Carlson, is the prototypical alpha male, dedicated to the ideal of masculine freedom and moral disregard to a clear fault, slightly effeminate in a way that speaks to comfort and smugness rather than genderless enlightenment. The catch to this, and perhaps the cause of it, is that Jack is married, with a kid. His compulsive debauchery with his bachelor friends is the nostalgia insighted reclamation of hazy recollections and overstated joys of his younger, freer days, his single days. He is the instigator of altered states, the conversationalist of fuck, the flirty philosopher of rationalized impunity. He is what I am most afraid of being and never becoming.

The set rotates like days. Lights up on a restaurant, park bench, bedroom. The stage wakes up to familiar things, it moves like life through strange moments, awkward situations and revelatory discussions. The time lapses accord to retrospect.

Don, played by a perfectly casted Landon Nagel, at one point referred to as a “whipped puppy” by his humorlessly aggressive girlfriend, Lisa (Maggie Marlin), is pretty much just that. Wrapped up in an unrelenting desire for foundational stability, he is the reluctant bachelor, critically contemplating the meaning of so much beer and smoke and boyish manhood.

Lisa is a terrifyingly demanding, easily insulted foil to Don, and her role is filled so convincingly by Marlin that I didn’t want to meet her after the show. Plainly, she scares the shit out of me, and it takes a lot in a person to do that. Marlin is not alone in her flawless adoption of character here. In fact, every female cast member felt so authentic that suspension of disbelief lingered long after the show as I considered the consequences of relationships with each of them as characters, not actors on stage. Lauren English plays a jogger, Maggie, who is somewhat reminiscent of a spandex clad Clarissa (Explains It All, duh) with philosophical quandaries about men and social protocol. She says exactly the right things with biting timely precision, and seems like she’s got a lot to get off her chest with particular standards about to who she divulges her concerns.

Phil is a self deprecating-failure. His feet are firmly planted in misery while Jack casually crosses his legs and leans back into himself. He doesn’t live up to anything, particularly Jack’s vision of freedom. Andrew Donnelly does a great job at acting out the embarrassing follies of this strange and pathetic monument to insecurity and hopeless phoniness. It hurts to watch, which is kinda the point. But even he grows tired of Jack’s ironic, if not hypocritical statements and actions.

The whole play darts between exalted hedonism and dark depravity, between domestication and defiant independence, boyishness and manhood. The incredibly poignant script by Howard Korder conspires with effective, minimalistic set changes and acting strong enough to allow for it, to create a vivid portrait of a place in life familiar, desirable and horrible, endlessly true.

“So, gentlemen, what’s next on our parade of pleasure?”