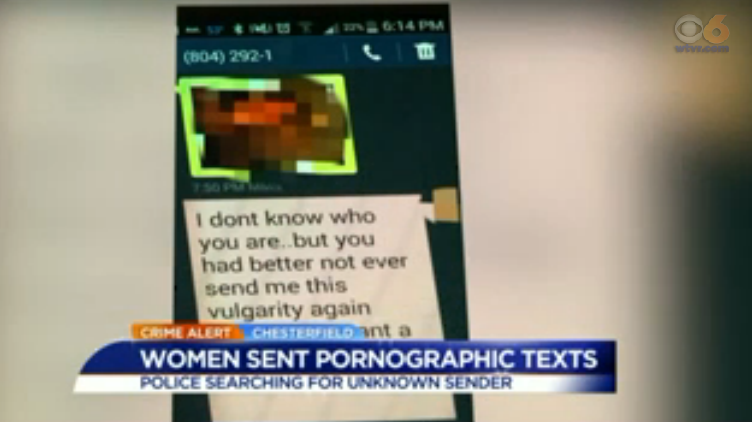 Chesterfield moms get mystery dick pics, CBS 6 is there

Two Chesterfield County women have been on the receiving end of what I hope is a more-clear percy-pic than what CBS 6 is showing (seen below). If that’s what this weirdos wedding tackle looks like, he’s got much bigger problems than C-field police.

At least one woman, Esther Rodriquez, has come forward to speak to the public about the crude photo she received. Using her poor, probably humiliated son, Louis, as an advocate, Rodriquez said she received the image on Saturday and hasn’t felt safe yet.

“She feels abused that she can’t be in peace without someone sending her bad stuff…,” he said the boy about his mom who got sent a dick pic and had to deal with that in school the next day.

Another woman spoke off camera to CBS and said she similarly felt threatened, and went online to find out many other people have been victimized by rando dong shots.

Evidently there is a nation-wide crisis of indiscriminate peen-portraits, according to CBS IT/Dork Depiction expert Gregory Bell, who said “more people are sending inappropriate text messages to people they do not know.”

Every part of this story is funny, including the reasonably anoyn victim said she feared her child would be the next to fall for the cranny axe-capture criminal.

I’d call this fear mongering, but it’s about eggroll-etches which I don’t think qualify for an increase in the national terror threat meter.

Isn’t this why snapchat and tumblr exists?

Attn: weirdos of the world, you’ve got tons of places on the internet to post your vein-wang vignettes, lets try to keep innocent suburban moms out of the mix.

If Chesterfield Police really want to catch this guy, I think they should publish the photos – HAVE YOU SEEN THIS DICK? CALL CRIME STOPPERS (804) 748-0660

Check out the video below for more fuzzy fire hose photos, embarrassed sons, and members of the press saying “penis” on broadcast TV.