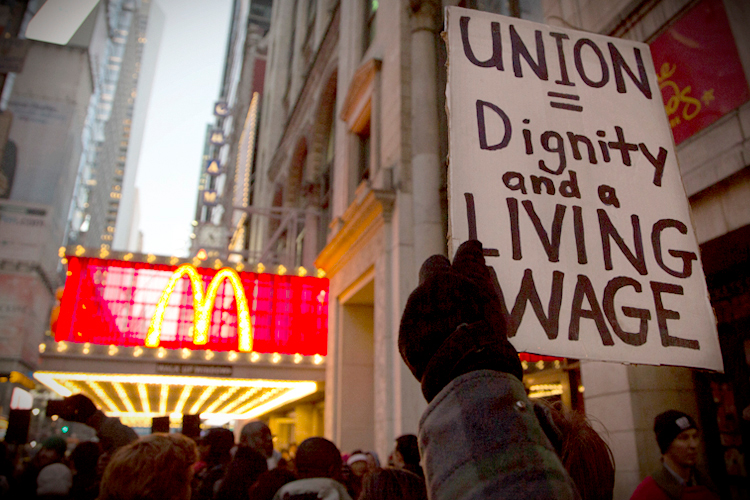 RICHMOND – Voting along party lines, the Senate Commerce and Labor Committee on Monday killed a bill to raise Virginia’s minimum wage to $8 an hour and then gradually to $10.10 an hour.

RICHMOND – Voting along party lines, the Senate Commerce and Labor Committee on Monday killed a bill to raise Virginia’s minimum wage to $8 an hour and then gradually to $10.10 an hour.

The committee voted 11-3 to “pass by indefinitely” Senate Bill 681, meaning it probably is dead for this legislative session. The Republicans on the panel voted to kill the measure; the Democrats voted to keep it alive.

Sen. David Marsden, D-Fairfax, sponsored the bill and argued for it.

“Today’s minimum wage workers are adults who are working multiple minimum-wage jobs and struggling to raise a family,” he said.

The federal minimum wage, which is in effect in Virginia, is $7.25 per hour. It hasn’t been increased since 2009.

Supporters of SB 681 say that the minimum wage has not kept up with inflation and that too many people must rely on minimum-wage jobs to make ends meet. They say raising the minimum wage would be good for the economy by providing more Americans money to spend.

“If Virginia’s minimum wage was raised to $10.10 an hour by 2017, almost 700,000 Virginia workers would get a raise. Out of these workers, close to 90 percent would be age 20 or older, and close to half would have at least some college education,” said Michael Cassidy, president of the Commonwealth Institute for Fiscal Analysis, a watchdog group.

“So most are not teenagers working after school, but workers who rely on their earnings to pay their bills.”

Several business groups showed up in opposition to SB 681. They included the Virginia Chamber of Commerce, the Virginia Farm Bureau Federation, the Virginia Hospitality and Travel Association and the National Federation of Independent Businesses.

“This legislation disproportionately hits small business owners,” said Nicole Riley of the NFIB. “Many have told us that it would lead to them hiring older and more experienced workers and would not help those who the minimum wage was for — the young, those with less skills and experiences.”

“Two-thirds of them within the first year have seen an increase in their wage,” she said. “So our members feel as time progresses with experience and skill, they do raise the wages when they can for their employees.”

Sen. Dick Saslaw, D-Springfield, was one of the three members of the Senate Commerce and Labor Committee who supported SB 681. Before the vote occurred, he urged his colleagues to think about the people who would benefit.

“Let’s take the hotel industry,” Saslaw said. “I can’t remember the last time I went into a hotel anywhere in the United States, at least where I’ve been, where I’ve seen an employee who cleans rooms and jobs like that, who look like my wife or I.”

Similar bills passed the Senate last year before dying in the House of Delegates.

Three bills to boost the minimum wage currently are pending in the House.

Here is how the Senate Commerce and Labor Committee voted Monday on SB 681, which sought to raise the minimum wage in Virginia.