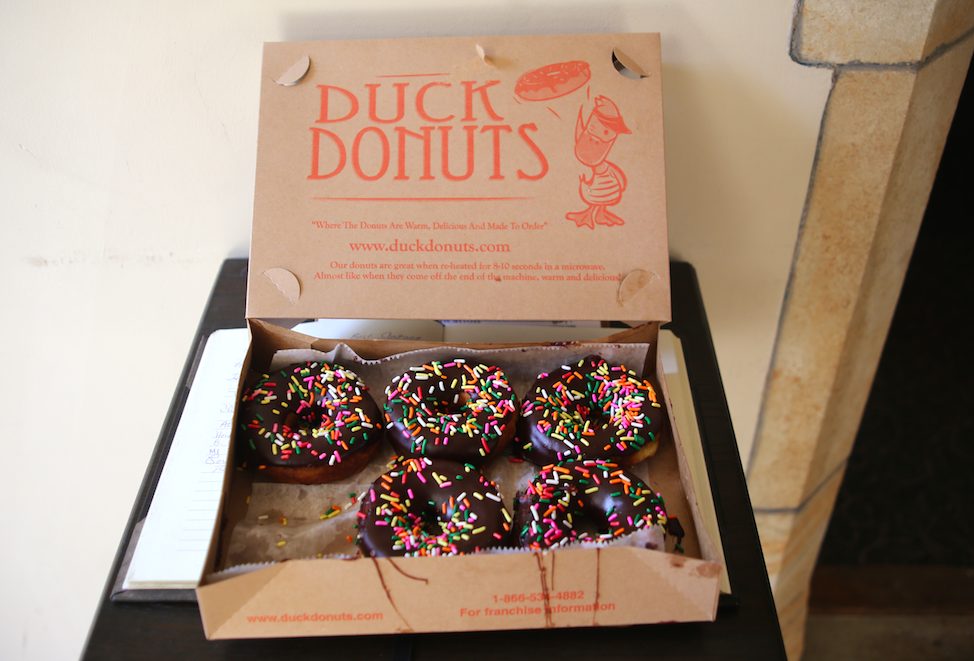 The donut wars continue to rage in our fair city. Now the newest force to enter the battlefield has just lobbed its first volley, and it’s impressive.

The donut wars continue to rage in our fair city. Now the newest force to enter the battlefield has just lobbed its first volley, and it’s impressive.

Duck Donuts, of hung-over Outer Banks, NC, fame, has opened its doors on its first RVA location, out in Willow Lawn with all the other new development blowing up the recently-remodeled shopping center.

This location is the business’s first franchise, with plans to expand nationwide. Keith Exton, the local franchisee, call Richmond a market which knows the Outer Banks Well. “We were excited to bring the Outer Banks here,” said Exton.

So how does a new donut company stand out here in RVA? Take a few steps into their shop and you’ll notice it pretty quick – you get to watch your donuts being made. Two massive chrome donut fryers sit behind a glass wall – each donut is dropped before your eyes, and can be seen sizzling as they slide down the conveyer belt.

Next, donut makers add the toppings before they are handed to you warm and fresh… incredibly warm and incredibly fresh.

“Our concept is to make sure they are warm, fresh–no pastry cases here,” said Exton. “This is an experience, for [people] to see and feel as the donuts get made.”

Exton called today’s opening a “quiet opening,” but he hopes to see business pick up over the weekend.

“We’re excited to get in and get started,” he said.

Robyn Griffith, the franchisor/head honcho at Duck, was also in attendance to see the Richmond version of his baby open its doors. He said the concept of baking fresh in front of costumers was something they implemented eight years ago, and he believes it makes a difference.

“It really puts on a show,” he said, holding the doors open for costumers to walk in. “Not to just buy donuts on a rack, but to see your donuts being made.”

So how do they taste? We handed out a few to the donut experts at our office building and the reviews were raving. “These are amazing,” said Lauren Bell, facilities manager here at the Branch House. “It’s awesome, because it’s soft inside but it’s crunchy on the outside.”

Bell and her compatriots say they are regular donut eaters – holding annual donut-offs or “battles of the donuts.”

“I’m a huge fan of Sugar Shack,” said Bell as the still-warm donut danced on her taste buds. “But this is a close second.”