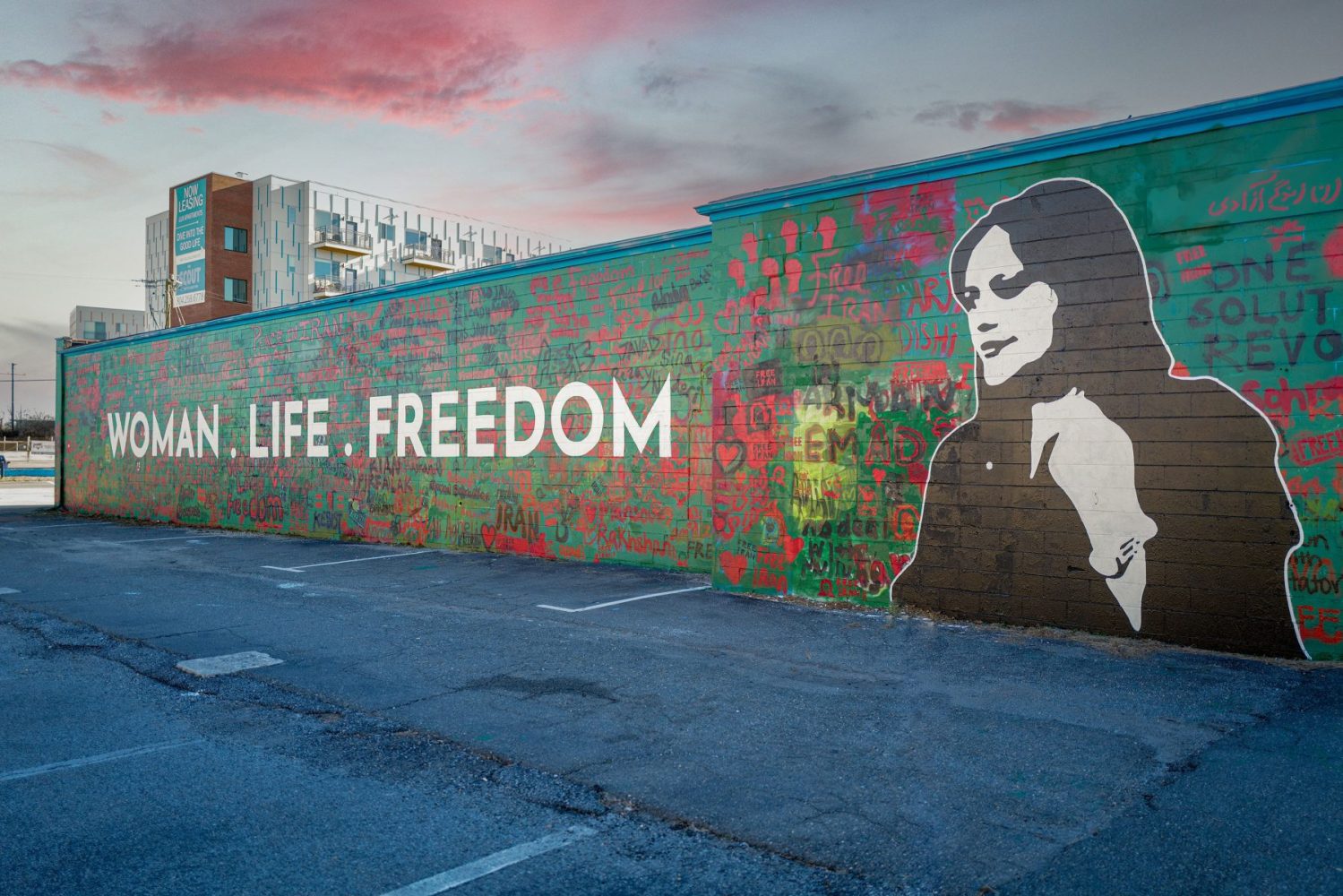 This past weekend volunteers, artists, and activists from Richmond gathered for a community mural event led by Woman Life Freedeom RVA to honor the lives lost and struggle for freedom happening in Iran. 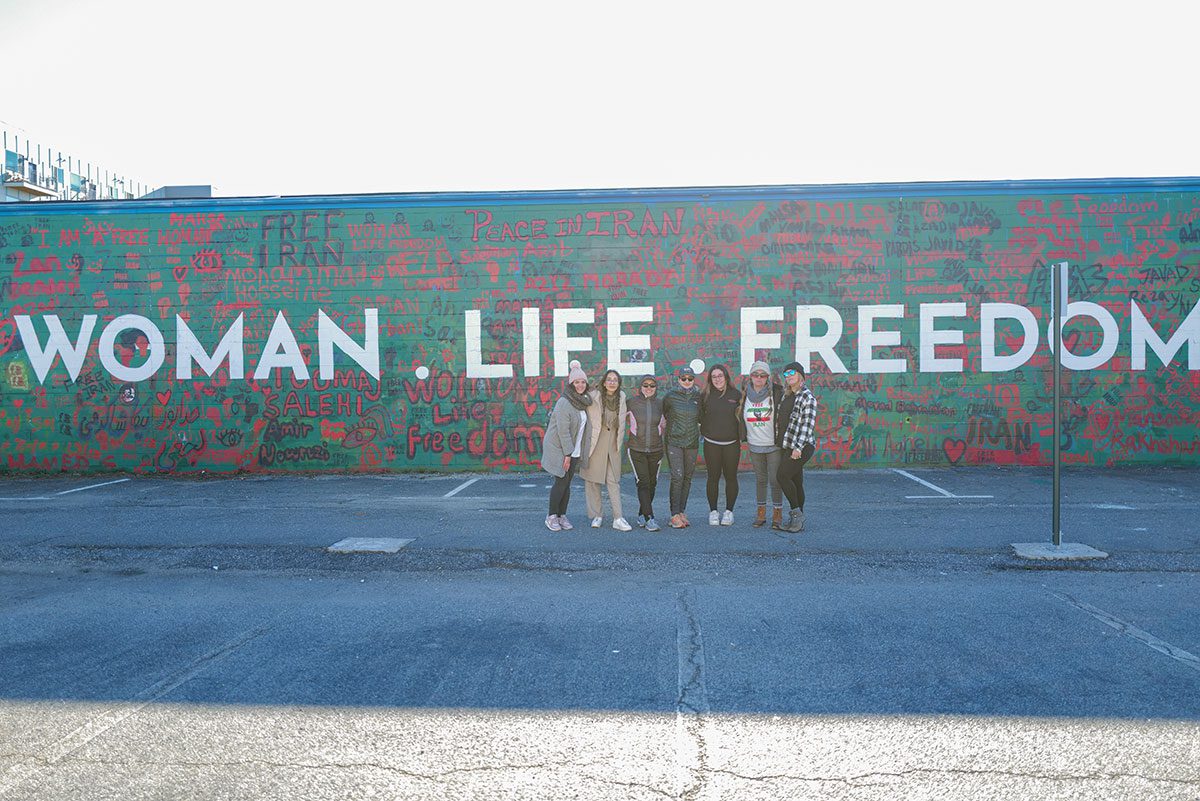 The people in Iran, from the smallest religious rural town like Qom, to the big modernized cities like Tehran, have been protesting for 4 months straight. Beginning 125 days ago on September 16, 2022 and continuing today, they need our help. They need your help.

On Sept 13, a 22 year old woman named Mahsa Jina Amini, was arrested by the country’s “morality police”, known in Iran as the Ghast Ersad, for allegedly wearing her hijab improperly. Mahsa was a shy, compliant young woman, visiting the capital city of Tehran from her small, Kurdish town of Saquez. At the time of her detention, she was accompanied by her brother; she was not flouting the country’s religious laws or trying to make a statement – she was dressed like any other woman in the country. In Iran, according to laws set by its government, based on its extreme interpretation of Islam, women must cover their hair and the shape of their bodies.

But on this day, as she exited a metro station in Tehran, the Ghast, for reasons still unclear, took her anyway.

Three days later she died in a hospital from blunt force trauma to the head, injuries she sustained while in custody. The government claimed she died of a pre-existing heart condition. However, when CT scans of her skull were leaked to the foreign press and journalist Niloofar Hamedi released a picture of Mahsa’s grieving parents, a fuse that had been simmering for decades was lit.

What started as a protest against the unjust killing of this young woman, has quickly turned into a full-scale revolution against the Islamic Republic of Iran (IRI).  But what is the Islamic Republic of Iran? Since the Islamic Revolution of 1979, Iranians have lived under an oppressive theocracy that came to power after hijacking a movement against the former monarch, Shah Pahlavi. But instead of the freedom and equality they promised, they instituted an even crueler and more power-hungry regime in his place, one which brought the country backwards in time.  In the intervening 44 years, the IRI has relegated women to second class citizens, extinguished ethnic minorities, outlawed the practice of any religion but Shite Islam, decimated the country’s vast resources, and hoarded its wealth for its religious leaders, known as the mullahs.

While recent news from Iran has been amplified by social media, this is not the first time the people of Iran have risen in protest. In 1999, 2009, 2017, and 2018, young people and women took to the streets, protesting a sham presidential election, raging against unfair energy price hikes, and demanding the most basic of human rights. Each time they were quelled by regime forces who thought nothing of unleashing the most brutal and violent forces on its own people.

But this time, it is different.

This time when the security forces attacked universities—tactics that ended uprisings in 1999 and 2009 — students poured into the streets rejecting their authority. Young students, girls in high schools, shouted down the ministry of education, demanding change – something unheard of only a few years ago. Those of us watching our homeland from a distance, had never seen this kind of resilience and rebellion before, this time it was different. And with a chorus of global voices and support from within the US and abroad; this could be the last time.

I know this story well. What is playing out in the streets of Iran right now, is my family’s story.

My father, a pilot; my mother, a recent graduate of English literature from Tehran University, and; my brother and me, just toddlers at the time; left behind everything to escape the IRI. We said goodbye to dozens of cousins, aunts, and uncles to claim political asylum in a country that promised us freedom, opportunity, prosperity, and most importantly equality.  We fled the brutality of the regime in the early eighties and were lucky enough to set up a new life in Virginia.

These protesters continue to rise against a brutal and violent police force, including the feared and dreaded Ghast. This government sponsors terrorist groups around the region and sells weapons and drones to Russia to kill innocent Ukrainians.  In the last 4 months, even through a disabled internet, videos from accounts such as 1500 Tasvir, Masih Alinejad, and Center for Human Rights in Iran have emerged; showing Iranians being abducted from their homes, forced into vans marked as ambulances, and taken from hospitals where they go for medical attention.  On October 25th we watched a wing of Evin Prison burn to the ground and prison police shooting prisoners who tried to escape the smoke and flames.  We’ve witnessed these events begging mainstream news outlets to cover these atrocities as they would other global events.

The journalists, Niloofar Hamedi, who broke the story of the brutal and tragic murder of Mahsa Amini; and Elahe Mohammadi, who reported on her funeral, were arrested in September, put in solitary confinement, neither have been heard from since. They are just two of the hundreds of journalists, bloggers and social media commentators who have been detained, while their fates remain unknown.  Along with dissident rappers Toomaj Selahi and Saman Yasin, who is now slated for execution.  Amnesty International and other news outlets have also reported on four other executions; Mohsen Shekari and Majidreza Rahanvard in December and Mohammad Mehdi Karami and Seyed Mohammad Hosseini on January 7 of this year.  Their deaths continue to sound the alarm of many more executions to come.

Others have been detained but released due to intense international pressure and include Hossein Ronaghi, a WSJ contributor and Taraneh Alidoosti, an Academy Award nominated actress. Both remain in Iran, defiant and brave.

Not to mention all the ordinary citizens killed in the streets by another security force known as the Islamic Revolutionary Guard Corps:  Nika Shakarami, 16 years old; Sarina Esmailzadeh, 15 years old; Mehrshad Shahidi, 19 years old; Khodanoor Lajaei, 27 years old; and Kian Pirfalak, just 10 years old. Hundreds of young, bright lights extinguished by a brutal regime whose only goal is to stay in power and enforce their interpretation of Islam on a society whose history and culture dates back thousands of years before said religion.

So, where do we go from here? We must continue to talk about the thousands of political prisoners still detained in Iran.  We must keep the names of those slated for execution in the media, while pressuring our leaders to announce the end of negotiations with a government who has now arrested upwards of twenty-thousand of their own citizens for wanting nothing more than their basic human rights. Follow human rights organizations such as Abdorrahman Boroumand Center and Amnesty International Iran who continue to highlight pending executions.  Urge our leaders to pass legislation like H.R. 9203; aka the MAHSA Act introduced by Jim Banks and H.R. 9075 introduced by Adam Schiff.  Urging US leaders to recall UN ambassadors to Iran, to sponsor political prisoners of Iran and pressuring EU parliment to designate the IRGC as a terrorist organization.

We must lend our voices and our strength to the people in Iran while we still have them.  The fight against religious and political fascism, transcends boundaries, borders, race or gender. To liberate the people of Iran is to acknowledge that all of our struggles are connected and that we are stronger together.

For more information on how you can help: @WomanLifeFreedeomRVA
Main photo by Matin Kordnavahsi
Mural art by Mahsa Maghsoudi 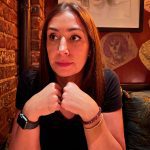