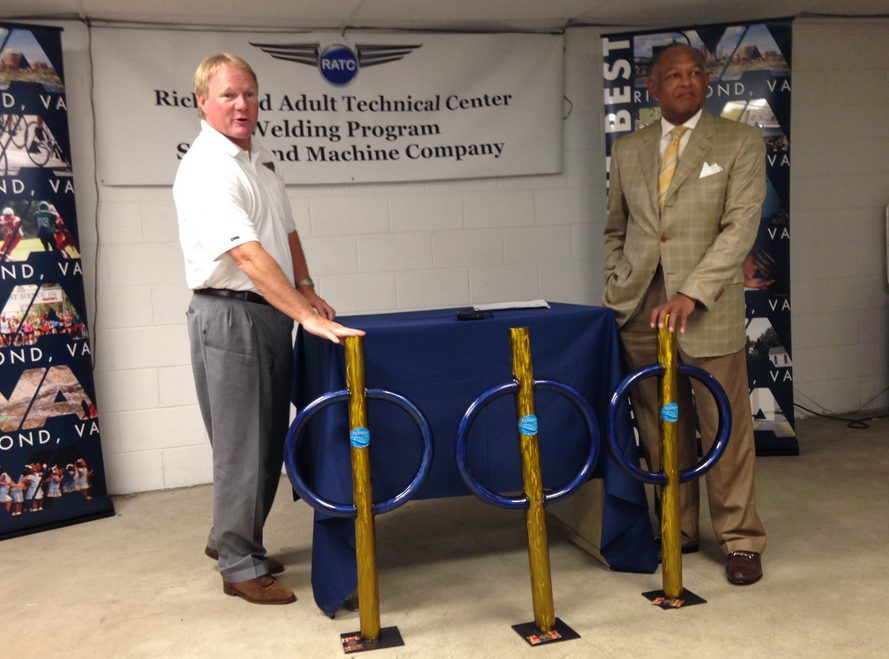 RVA bikers can take heart – the City of Richmond is partnering with local welding students to produce hundreds of new public bike racks in time for next year’s UCI World Championship race.

“We recognize that without a skilled workforce, we cannot retain businesses and we cannot attract businesses to the City of Richmond,” Mayor Dwight Jones said Thursday at Strickland Machine Company in North Side. Instead of buying bike racks from out-of-state, he said, they can now be produced “inside the city by residents of the city.”

Seven students from the Richmond Adult Technical Center‘s welding certification class helped create this batch of 50 bike racks, said Matt McGee, president of Strickland Machine Company, which hosts the class. The city’s partnership with this century-old foundry is part of the Workforce Development Pipeline, Jones said, an initiative that helps companies find and hire Richmond residents who have been given job training.

Ultimately, 225 bike racks will be produced from this collaboration, said Jakob Helmboldt, Richmond’s Bicycle, Pedestrian and Trails Coordinator. “We’ve got tons of bike-parking demand,” he said, and the racks will help bikers avoid having to use street signs and trees. About 65 racks are being installed in Downtown and in The Fan this week, he said.