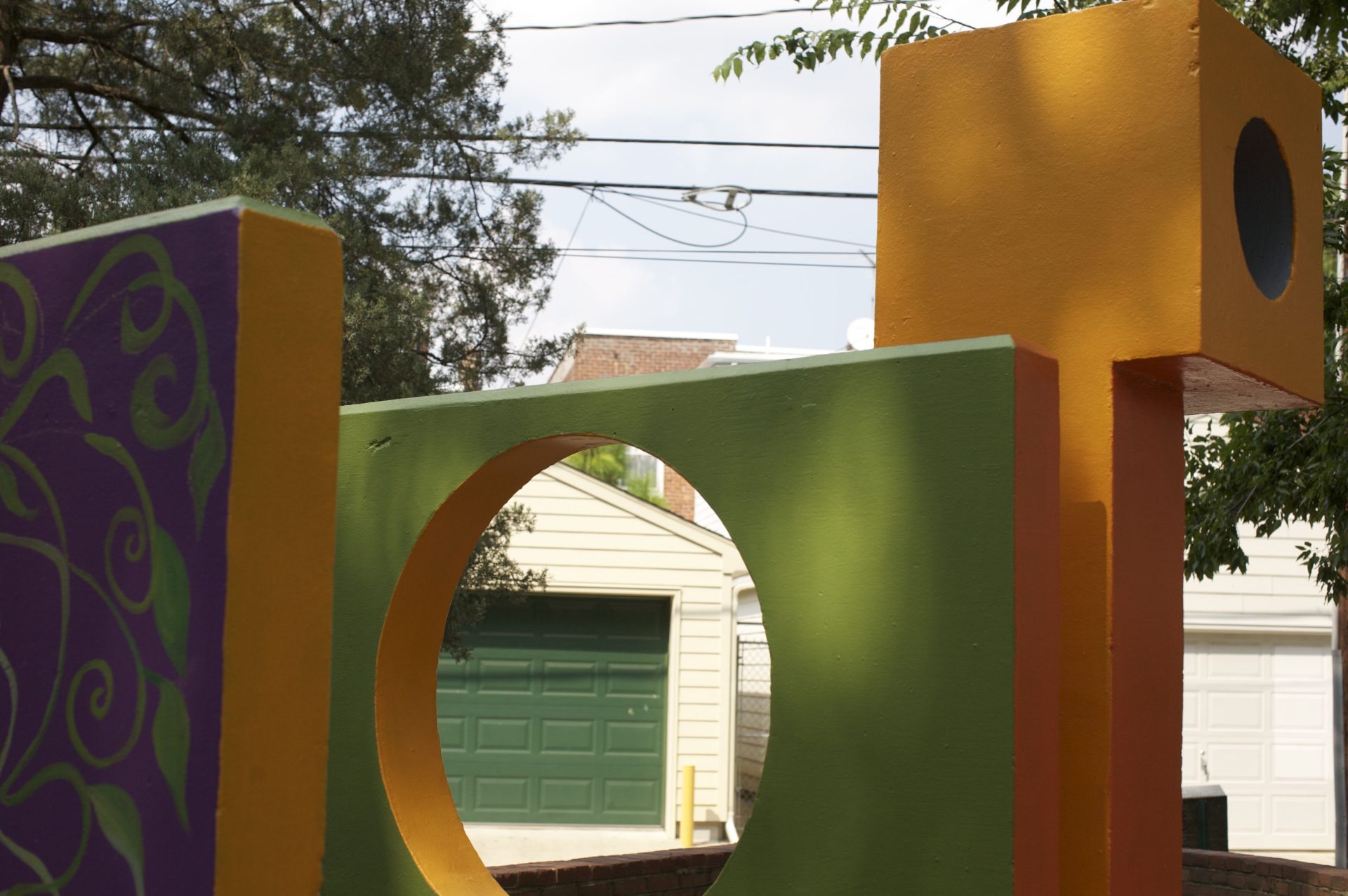 On any given weekday around noon or one, I make my way from the RVA compound to All Star for breakfast. In an anomaly of urban navigation, the shortest route is also the most scenic, and consists mostly of a stroll down one of Richmond’s better cobblestone alleyways, right past what I will always call Geometry Park. On any given weekday around noon or one, I make my way from the RVA compound to All Star for breakfast. In an anomaly of urban navigation, the shortest route is also the most scenic, and consists mostly of a stroll down one of Richmond’s better cobblestone alleyways, right past what I will always call Geometry Park.

It wasn’t quite a feeling of surprise when I saw the foundational stages of painting, base colors and outlines of images, emerging from the drab bluish grey (common of graffiti removal and impending storms,) which had comprised the palate of the geometric shapes that had earned Paradise Park its nickname. It was more like the sensation of a need you didn’t know you had being fulfilled, a loosened tie, discarded socks, or something collaborative and human being inserted into the accepted day-to-day imagery and color-schemes of our urban landscape. S. Preston Duncan in his natural habitat (surrounded by art)

Donna Joyce, the president of the Friends of Paradise Park organization, has evolved from a somewhat cluelessly obligated volunteer caretaker, to the champion and potential hero of a vital community resource of largely untapped potential.

So when I inherited the cleanup, the woman who kinda headed up the cleanup was going to move, so I was like “sure I’ll take over”. I figured it would be just cleanup a couple of times a year, the Fan District Association helps and brings out mulch and dadada. I didn’t realize it’s year round. It’s been an interesting experience to learn that, but it’s been great as a community engagement. Personally, working on this project has been overwhelmingly emotional. Every day that we come out here there are new people that I don’t even know, and they use the park and they’re excited about painting, and telling their friends about it, and they tell me little stories. These people that were eating lunch here the other day had bought their lunch at Ellwood Thompson’s and brought it to this park. And I was like “wow, did you drive?” I couldn’t believe it. That was just unbelievable to me. For them, apparently it’s a favorite, and it’s a shady [as in the trees block out the sun, not as in full of shady characters] park. I guess there aren’t many parks in the Museum District.

The park has apparently fallen under a certain amount of contention, with concerns mounting among particular neighbors about the park harboring such dangerous crimes as vagrancy, graffiti and skateboarding. Those maintaining this perspective share a belief that the park is underused.

It’s peaceful. When we had our meeting in the beginning of June, a lot of people came out who I think had never been in the park together at the same time, so it was very exciting to me. I’d like for music, theater, bands, I’d love to see spoken word, I’d love to see the middle-school involved, whatever people come up with. Some people believe that this is an under-used park. They complain about the skateboarders and vagrants. I don’t really see vagrants, occasionally, but… I’ve never seen anybody be threatening here, and I do sit in on the parks meetings, because we only have graffiti and skateboarders, and other parks are dealing with really huge problems like prostitution, gun running, and drugs. Looking up at the rows and rows of windows overlooking the park, it’s not hard to understand why: This is not a secluded area. Surveillance cameras, big-brother implications aside, would be completely superfluous here. Everything you do in this park is potentially witnessed by a large number of residents. And this, combined with the nearly constant flow of passerby, is where the accusation of underuse becomes demonstrably unfounded.

We seem to have a problem in Richmond with people complaining about what’s not happening, as though they are detached to an extent of helplessness to make those things happen. Joyce is not one of those people, and her proactive, visionary community involvement might just prove to be the cure to passive, reactionary criticism.

We’re not a high-crime park. And that’s putting it lightly. We’re really low crime. And I think, I don’t know, but it wasn’t always that way. There were gangs here, but they were run out. Actually that guy’s [points to the home of an ex-mounted police officer in view of the park] mom coordinated a sting with the other neighbors and the police. Those apartments [pointing in the opposite direction] used to be welfare housing, and every time they got their checks they would come out here and party 24-hours a day. So it was a different kind of neighborhood 15-20 years ago. But now we have half home-owners, half renters, so I think the way to engage both types of folks, and we have so many different interests around the park, we have a 55 and older community over here, Binford middle school over there, places with families, students, all sorts of people, we want to have more planned activity to drive more interest in the park, and to help maintain it, to have an active park. And to be able to document that it’s active to the folks that think it’s not. But having been here just for the mural, it’s pretty active. There’s a lot of people in and out of here, walking their dogs, sitting and eating lunch, they bring their kids and let them play. Paradise Park, named for the gigantic Paradise tree at its center, has as much historical significance as it does potential. Designed by artist and architect Carlton Abbot in 1968, it has garnered two awards, one by the Virginia chapter of the American Institute of Architects, and the other for urban design in Richmond.

The time-transcendent collaboration of a group painting such a prestigious structure created over 30 years ago is enough to curate a series of philosophical goose bumps, but may be beside the relevant point.

The underpinning of community interaction, growth, and development has always been the increasingly neglected cultivation of a commons: that place in which ownership is shared and territorialism unnecessary. It is the forum in which the imperative sense of a collective experience can be fostered, where the free exchange of ideas and noncompetitive self-expression can be practiced, where community is created and becomes more than that which is necessitated by the proximity of our dwellings. It is where we entertain discourse, and learn to accept each other, where we can evolve into an urban village, an amalgamation of friends, fulfill our mutual potential, and build a family.

Join us this Saturday, August 8th from 11am-1pm, and march around the block with the NO BS Brass Band, visit Art on Wheels mobile printing press and the Visual Arts Center craft table, and be sure to thank Donna Joyce and all the tirelessly dedicated volunteers doing something to make this city what it could be. For more info, visit http://homepage.mac.com/peani/Park/