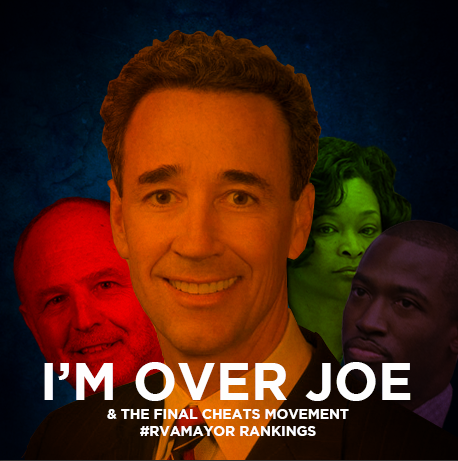 WELL…THIS IS IT! If you’re anything like me at this point you have a bit of campaign fatigue.

WELL…THIS IS IT! If you’re anything like me at this point you have a bit of campaign fatigue.

This RVA Mayorol race has been as crazy as any election I’ve seen in my lifetime (except the current Presidential race). The moves of the last week really have impacted my view of the race.

Jon Baliles dropping out and endorsing Levar Stoney does move Stoney to the top-tier of possible candaidtes with Joe Morrissey and Jack Berry.

This is the first time I’ve moved Stoney to the top-tier – so he’s peaking at the right time – but is that enough? Berry seems steady and raising a ton of money for the final days – a lot of it from Jim Ukrop, which is not a bad thing… I think the question I have is: Is the last big loan from Ukrop only to be used in case of a runoff?

Michelle Mosby was continuing to impress me with how she was handling the race – I use past-tense because her latest Facebook manifesto after Baliles endorsed Stoney seemed a bit desperate.

And then we come to “Fighting Joe.” While The Cheats Movement Blog has not made an endorsement in this race – which is just as fitting being that I can’t vote in the Mayor’s race (I see you Henrico), I have still learned a lot from it all.

Here is how I feel going into Tuesday:

I’ve tried and I’ve tried. And yes, I know I’m not a journalist in the traditional sense and this blog is a reflection of my thoughts and opinions — so my opinion is that I’m over Joe Morrissey.

And the idea of Joe Morrissey being the Mayor of Richmond, where I have to hear about it for the next four years; what I’ve heard throughout his campaign is unimaginable and unbearable.

Let me be as clear as I can be – Joe suffers from self-inflicted wounds. He is not a victim! In fact, I would argue that everyone around him is a victim that he’s preyed upon.

I believe that he uses his positions to appear like he’s helping people but indeed – he’s using them for his advantage. Does he help people and has he helped people throughout his career? Sure he has.

But there is an angle and most people see it. It’s pretty transparent. And yes, he does come to collect on his goodwill.

I’ve come to the conclusion that since he takes advantage of people and communities that are undeserved, low-income, high concentration of poverty, so-on, it lends to his narrative of being a hero for the undeserved.

And it highlights the fact that most “so-called” leaders don’t care enough about those communities when they are not running for their vote. This is another reason why I give Mosby credit – I believe she cares for the people in those communities.

Nonetheless, when it comes to Joe, I’ve come to the conclusion by watching this campaign that the city must do better. We must elect someone who can be a role-model to our children, have vision for the future, and manage the city in a way that is effective and efficient.

I think, if Joe is elected, the next four years will be about Joe and not about the city.

It will only be about the city in the ways that highlight Joe and his fighting spirit – and when he is faced with challenges, he will make Richmond the victim as he has made himself in all the personal challenges that he has brought on himself and for that reason I must join the choir of people who say #NEVERJOE.

2. JACK AND LEVAR – THEY ARE WHO YOU THINK THEY ARE

At this point, it’s down to Jack or Levar, take your pick. They are who you think they are.

Jack has run a great race for Mayor. Funded by those who represent old Richmond’s business community (and some new Richmond too). I’ve been impressed from day one about his ability to be professional, understand his challenges and willingness to go out and really try to win this election. And he’s been rewarded for his effort in a way that I think he finds surprising and really good.

He’s learned a lot and I think will continue to learn as he moves forward if elected Mayor.

He’s strengths are proven. I think he will manage the city in way that Richmond needs. I think he will work well with others and be a strong regional figure. Will he be tied to corporate Richmond? Probably. Those are his people. Will he be a vision of youth and inspiration? Not really. But do we need that as much as we need strong management? It depends on what you are voting for.

Levar is also who you think he is. He will have that energy and passion to wake up and dedicate every minute to the city of Richmond. He will instantly be a national figure – a 35-year-old, Black Mayor, with strong ties to the national party. He will be Corey Booker/Harold Ford Jr. on steroids – and those are all great things for the city if he uses his status well.

Does he connect to the undeserved communities of RVA? Not really. Is this a stepping stone for him? If he wins he will be vaulted into a national spotlight. I can’t see how it won’t be. Is he tied to the Governor and his State friends in a way he can never get out of? Yes.

But he should continue to own that — again, if you have people – own it. He’s now poised to be in a run off, considering his GOTV operation is on point – and if he is, a credit to him. He’s worked very hard to be in this position.

The drama on election night is whether Joe wins on Tuesday or we go to a runoff. I don’t see Levar or Jack winning on Tuesday. I also don’t see Joe winning a runoff between either Jack or Levar. For Morrissey it’s Tuesday or bust.

Joe Morrissey: #StayWoke RVA – If Joe is Mayor, the next four years will be like his campaign, filled with self-inflicted and embarrassing controversy.

Jack Berry: He has a lot of money and has run a very impressive and steady race that I know he’s proud of but if he wins on Tuesday he has to keep that commitment to learning about all of Richmond.

Levar Stoney: He has the momentum and is peaking at the right time. If he wins he has to be committed to the task of being a grind it out Mayor and not a celebrity Mayor.
Tier II:

Michelle Mosby: I hope she stays involved in making the city a better place to live. I think she has a very important voice.

There you have it. I hope you go out and be apart of the process. The Table will be back early next week to break down the results. #WESEEIT

Reva Trammell and the “Mammy” Jar

Hazard pay, face mask requirements, and bus drivers testing positive for COVID-19 are issues that came to the fore after a labor action by... READ MORE

Reva Trammell and the “Mammy” Jar

Hazard pay, face mask requirements, and bus drivers testing positive for COVID-19 are issues that came to the fore after a labor action by... READ MORE