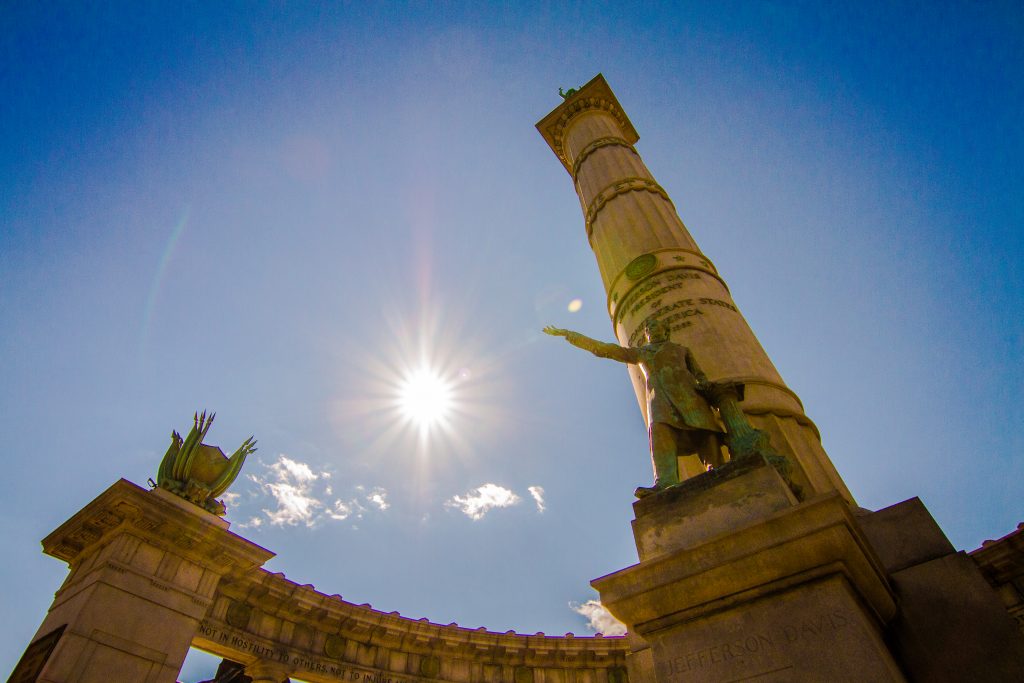 The city of Richmond has a unique opportunity with Mayor Stoney’s Monument Avenue Commission.

As our nation continues to be divided over issues of national identity, culture, and values; cities across America are now faced with the questions of how to contextualize public displays of history- namely, Confederate history. In some of these cases, this decision has been undertaken by state leadership, in others, public debate.

Here in Richmond, we have the chance to make this a community decision, which is a rare luxury in today’s political landscape. Stoney’s authorization of the Monument Avenue Commission, led by leaders in the field of public history, along with community representatives is the correct approach to this complex issue.

The commission’s website not only invites the public to read about the project, but to review recommendations and to register your own input. Included is an invitation to two public meetings on August 9 and September 13, at the Virginia Historical Society. These public forums will invite discussion on how to best add context to our Confederate monuments, or if that context is even necessary.

Clearly not everyone will agree: many groups within Richmond will call for the complete removal or destruction of these monuments, while others will insist they can still stand as they are, with no alterations.

History is always changing, however. Not necessarily the facts themselves, but how we understand them, and in turn, how we view them through our present day experience. Over the past ten years of working in museum education, specifically focusing on early American history, I’ve watched the field evolve rapidly.

This is partly out of necessity: To stay relevant, we have to adapt and evolve. We have to make our understanding of history more engaging and more relatable to people’s lives. Not only do we have to relay the same stories most people are familiar with, but we also have to navigate the added pressure of the rapid politicization of history.

Because what we are taught (or not taught) becomes deeply entrenched in our understanding of our own communities, often becoming part of our cultural identities and our political lives in the process.

Therefore, we rarely ask the question, ‘why’: “Why do I believe what I do about our past and its symbols?” or “Why might somebody else’s beliefs about our foundation history be drastically different that my own?”

As a historian, I consider these questions daily as I discuss our nation’s founding with visitors from all over the world. They come to Virginia to learn what they have perceived is the truth about the past, and for good reason. Colleen Dilenschneider of Know Your Own Bone, has observed that most Americans trust the credibility of a museum almost 27 percent more than information from the government, and 11 percent more than information from the media.

I live across the street from the Jefferson Davis monument. Yet each morning when I cross paths with it, I find myself wondering about its place in 2017. Many don’t know that the towering monument is topped with a Vindicatrix – a feminine symbol of the Lost Cause movement – which clears the South of dishonor by bearing the Latin phrase ‘Deo Vindice’ or ‘with God as our protector’. This motto of the Confederacy is proudly touted as ‘the emblem of those martyred principles for which the Lost Cause suffered’.

This statue honors a man who fought to create a nation built on slavery, and one who worked after the war to mythologize the history of the Southern cause. Even knowing this, I don’t think the majority of Richmond’s statues should be removed and here is why:

To remove these symbols is to erase history, but not the false history many of the monuments’ most fervent supporters claim as their heritage. Tearing down Confederate monuments would be the quickest and easiest solution – and one that will guarantee Richmond will not have to confront the actions and rhetoric, which erected them in the first place. To destroy them will be to quietly brush aside the history of Restoration era Richmond. If we are going to stand by calls to better understand our past, we must consider all of our past – even the worst aspects.

The changes to Monument Avenue and to the statuary throughout the city of Richmond will be a long process requiring many years of continued discussion and input. Whatever conclusions are reached by the Commission, they will be the product of community decision making and not a single voice, which is how this process is best handled.

Yet even as a historian, I try my hardest not to have opinions about facts and to remain objective regardless of how hard that might be sometimes. At a certain point, however, we have an obligation to speak on the present. And we must make ourselves more open and more willing to insert ourselves into public policy conversations, now more than ever.

Additionally, a monument that memorializes the 36th US Colored Infantry who marched into Richmond as Davis fled the Confederate capital would be a powerful contextual statement. More so, because Richmond is a town where history museums serve largely as shrines to the military legacy of the Lost Cause. This makes a monument to the lives of the men who began the war as slaves of the South, yet ended the war as its liberators long overdue.

Now is also the time for monuments dedicated to the slave rebellions of 1800 and 1831, led by Gabriel Prosser and Nat Turner, both of whom were brutally suppressed and executed fighting for freedom. The city would also do well to recognize Mary Bowser, a slave who served as a spy for the Union in the Confederate White House and worked as a teacher educating formerly enslaved people only days after Davis’s flight from Richmond.

If we believe that all of our city’s monuments must elevate history equally then we must also consider a memorial to Opechancanough’s leadership in the last of the Anglo-Powhatan war in 1644.

The time for a version of history that teaches white men who took up arms in rebellion against their government were patriots and heroes, but black men who fought for their freedom were guilty of atrocities is over.

Now is the time to view American history with a much more critical lens.

To truly embrace this idea we need to move away from the politicization of history: That new narratives are not ‘liberal’ and to teach stories of our foundational figures is not ‘conservative’. We need to embrace the idea of one collective history, producing one America. Our history will always continue to be debated. But to ignore the stories of the men and women like Prosser, Turner, Bower, and Opechancanough who shaped our country is a gross injustice and one Stoney’s commission needs to rectify.

Furthermore, simple plaques detailing the revisionist history of the Lost Cause is not sufficient. In the case of certain monuments, alterations or perhaps complete relocation to museums may be appropriate. The monument to Davis, however, goes further than any other to celebrate a hateful past and continues to encourages the blatant misinterpretation of history.

I suggest fundamentally altering the monument by removing the columns and its engravings. These are meant to intimidate and mislead. The Vindicatrix’s tower should also be removed, along with dismissing Davis from a position of honor. Let him stand as he was – a man who fought for racial hatred, and who led efforts to wage war for the purpose of owning human beings. Let him stand opposed, demoted, and devalued, but just as real.

I believe Richmond has taken the first step towards answering this question by inviting our community to discuss this issue transparently. Public historians like myself look forward to seeing what Stoney’s commission will produce and what form this public discourse will take.

We need to be prepared to truly speak to one another, to facilitate informed dialogue, and to make time to critically assess both ourselves and others. The course this commission takes will serve as an example to other cities throughout the US who are struggling with the same identity issues. In a time of extreme political divisiveness and depersonalization of the opposition, we need now more than ever to listen, to empathize, and to become more familiar with our shared history. Perhaps even more visits to museums are necessary for this continued discourse.

Katie Watkins is a public historian with an emphasis on early American history. She is a National History Day and Virginia Association of Museums volunteer and graduate of Christopher Newport University. She has spent the last ten years interpreting history throughout the Historic Triangle and now calls Richmond her home. She currently works as a public archaeologist in Williamsburg and can usually be found the rest of the time taking long walks through the city with her husband and greyhound.