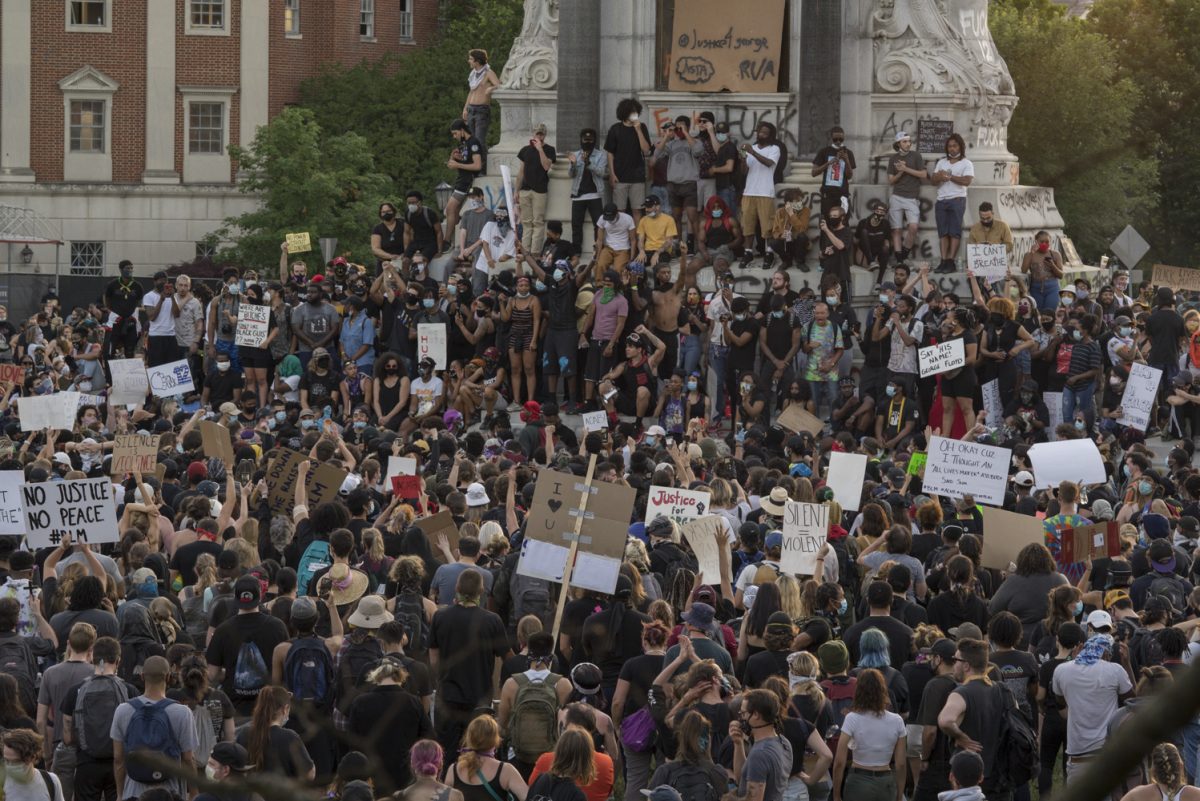 Over a month after the movement began, Richmonders continue to take to the streets and protest police brutality against the Black community. We spoke to people involved in the protests to find out what motivates them to speak out day after day.

The fight against police brutality and systemic racism is not over in Richmond. Day after day, people are still protesting, demonstrating, and congregating. Many news headlines tell one story, but the individual faces amongst the crowd tell a different one. This isn’t a trend. This has been a lifelong battle — but now, finally, people are listening.

We spoke to a variety of people involved in the ongoing protests around Richmond, in order to share their stories and make clear to the entire city why they continue, day after day, to take to the streets and make their voices heard.

Rashaa Langston: “Sage Smith, my older sibling, who is a black queer fem, went missing eight years ago. The Charlottesville Police Department always neglected Sage’s case. Compared to Hannah Graham, she went missing from Charlottesville shortly after Sage. However, Hannah Graham got a lot of attention. When Sage went missing, a week later they displayed their mugshot for 45 seconds on the news. My mom got 20 people to look for Sage, on train tracks and in dumpsters. The police gave us advice on how we should be looking for them.”

“When Hannah Graham, a college student went missing, thousands of people were out in yellow vests looking for her, even outside of Charlottesville, out in fields looking for her. It was very disheartening to see. They even asked the city council for more money than they did for Sage. They did not do any press for Sage. When Charlottesville Police Chief Longo was asked why he put more effort into Hannah’s case, he said she reminded him of his daughter. Which is sad because growing up, I used to hang out with [Chief Longo’s] kids; we would carpool together, so they knew my sibling. They knew Sage. However, they connected more with Hannah Graham, a complete stranger.”

Christiaan Branche: “No one is coming to save you but yourself.”

Stephanie Younger: “I’m an 18-year-old college student now, but I’m reminded why I work around Black feminism and abolishing youth prisons every time I remember my experiences growing up Black in Henrico County, Virginia — from almost never being invited to my classmates’ parties, to being on the receiving end of comments about my hair. However, the most unsettling experiences I’ve had are at the hands of adults, who assumed that I was ‘aggressive’ or ‘violent.’ In kindergarten, my mom spoke to the school I went to about a white boy who was bullying me. They didn’t believe her, as well as a white woman who tried to rationalize it. On the other hand, when me and my white friend (at the time) were both playing a game at a party, I accidentally bumped into her. Her mother, the same white woman who attempted to rationalize what I experienced, screamed in my face, and she accused me of trying to start a fight. I was 5, and I had no concept of physical violence. My kindergarten teacher additionally assumed that I was physically aggressive, and I remember when her response was to bring me to the principal’s office for having a panic attack during a storm.

A few years later, two white teachers went behind my back and told my homeroom teacher that I threatened to kill a white girl. I was 9, and I didn’t really know what death threats were. In hindsight, I realized that what I experienced was racism, but I never came to that full conclusion until I was 15 years old. However, I never spoke of it until then. I feared that no one was going to believe me, and that I was going to be gaslighted the way I was by my teacher; who weaponized the school’s policies against me to gaslight me into falsely admitting that I said to this white girl, ‘you are so dead,’ which I didn’t.

‘Misogynoir‘ was coined by queer Black feminist scholar Moya Bailey in 2008. To me, it acknowledges that Black women and girls experience both anti-Black racism and misogyny, and that those oppressive systems are not mutually exclusive. The experiences I had were ingrained in misogynoir. I also remember in 2017, Georgetown University’s Law Center on Poverty and Inequality released a report called Girlhood Interrupted. I cite this study a lot, because I relate to many of the aspects mentioned in the report. The report said that adults often see Black girls (as young as five years old) as older than they are, and believe that Black girls need ‘less nurturing, protection, support and comfort’ than white girls. The report shows that the world, especially schools, often see Black girls as ‘less innocent and more adultlike,’ which often leads to experiencing school push-out and being incarcerated.

Makayla White: “I’m only 13 and my mom is pretty strict in what info I read, who I make friends with and all. She’s kept me around pretty good people of all races. Most of the negative experiences I’ve had have been in school. If it wasn’t for me learning outside of school, I wouldn’t feel good about being Black, of African descent, because they don’t teach you anything to feel good. I question my teachers all the time, and add stuff. I had an assignment once on explorers; my project got turned down twice. I wanted to do an African explorer pre-Europe. The teacher said it wasn’t within the curriculum, I came back with the idea to do mine on [Pedro Alonso] Niño. Niño piloted the Santa María.”

“My personal stance is education reform. We have to change the textbooks. Future generations have a better chance to get rid of systematic racism. Imagine a whole generation that learns about Africa without slavery as a starting point. Instead of looking at people of African descent in a negative light, they would see how great we were first! And it changes the narrative. We need that.”

Aaron Brown: “I found a way to navigate racism most of my young life and come out unaffected with a high school diploma and a football career that forwarded me the opportunity to play NCAA football. Long story short, I ended up getting hurt — career-ending hurt — which directly affected my grants and scholarships for school. Around the same time, I had some problems back home and ended up homeless. The only way to remain in school and try to keep my entire life from derailing was to sell drugs. Which went well for a good while, til about my junior year when an old teammate (white) snitched on me for a reward from McGruff and a job at the local police station. I had a partner at the time who was also white and also was on the football team. When sentencing day came, I got three felonies, 11 years, suspended all but one and three years — well over guidelines in the state. My counterpart got three misdemeanors and three months in prison, for the same exact charges.”

“That’s when I realized, I can’t just ‘duck’ racism. I was a sports med major/bio minor honor roll student who had never even had a parking ticket. My university loved me so much, they allowed me to finish my exams even after being raided and arrested right off of their campus. I was a good kid. But the system doesn’t care about shit like that. I became the perfect example of the 13th on Danville VA Prison Farm, a privately-owned prison in Danville where they save $3 million every year by utilizing prisoner labor for all public works for $1 a day. I still went on to get a degree from VCU, start a couple businesses in the city and start an amazing music career. The issue is: that’s me. There’s way more people who couldn’t find their way back from the system. As someone who knows both sides in my experience, I used to want to be the bridge. Now I want to break the bridge and create a new experience here in America and the fucking world. A fair one.”

Jasmine Leeward: “What Love Requires: Love requires more than a chant, a kneel, an offering. Everyday I learn more and more about what love truly requires. I never considered what it would be like to truly love someone I’d never met until I came to love Marcus. What I’ve known of Marcus consists of a few photographs shared digitally, countless stories told from his sister, Princess, and Uncle Jeff; many told to me and other organizers in the basement of Second Baptist Church off Idlewood. I’ve had my friends tell me stories about seeing him at the gym. Two years later and I’m finally admitting to myself that I love Marcus.”

“I find myself wondering if knowing so much about Marcus played a significant role in my confidence that I would risk my life for him. He profoundly shifted my life. I am determined to protect his legacy and I am not alone. I stood with organizers two years ago and we are still here and the city is here with us. I am overwhelmed by the art, overtaken by the fight and will to defund the RPD. We cannot reconcile. As police rage against our communities, love requires us to rage right the fuck back. We are worth the risk and worth fighting for.” 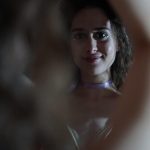 Born and raised in Annandale, Virginia, Alexandra Zernik is set to graduate in December of 2020 from VCU with a degree in journalism and advertising and a minor in business. She is a photographer, reporter and designer. Her passions include synchronicity, numerology and poetry.