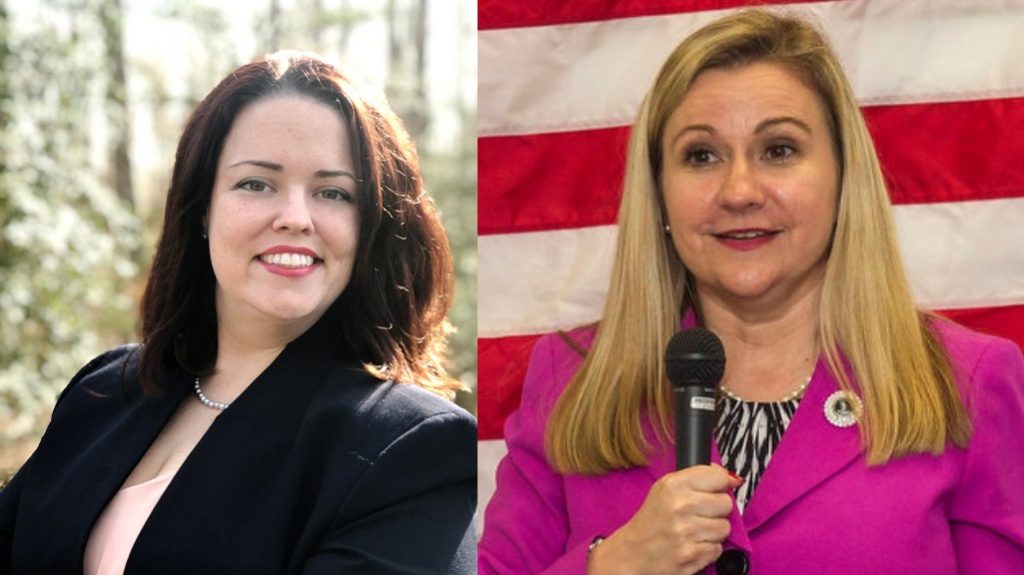 Gun-toting Republican Amanda Chase faces off against Democratic social worker Amanda Pohl for Chesterfield County’s seat in the state Senate. It’s shaping up to be a tough battle for both Amandas.

Few things could be more representative of Chesterfield County than two women named Amanda facing off for power. Indeed, this is exactly the political showdown taking place in the Commonwealth’s Senate District 11, which encompasses Amelia County, Colonial Heights, and a large swath of Chesterfield. While their first names may be identical, their political leanings could hardly be more different.

Incumbent Senator Amanda Chase first came to politics nearly a decade ago out of frustration with a proposed zoning change in her neighborhood, which she and a coalition of similarly disaffected residents fought and successfully blocked. From 2010 to 2014, Chase left her career in banking behind to found her own campaign management company promoting grassroots conservative candidates, which she today sells as a background in small business.

The mother of four raised in Bon Air rapidly transformed herself into something of a behind-the-scenes GOP operative, working on the campaigns for notable Republicans such as Ken Cuccinelli, Eric Cantor, and Randy Forbes. In 2014, Chase even briefly served as the campaign manager for Congressman Dave Brat, the Freedom Caucus insurgent who stunned the GOP establishment by toppling Cantor — the House Majority Leader — in a surprise upset.

Chase herself was swept to power in a stonking nearly seventy percent victory over her Democratic opponent in 2015. In her first term in office the Senator has mixed traditional Republican values, conservative populism, and cringeworthy scandal in nearly equal measure. Her championing of the coal ash cleanup bill, the bipartisan Transparency Caucus she co-founded, and the end of the King’s Dominion Law which blocked schools from opening before Labor Day lend credence to her campaign slogan: “A Mom Who Fights For Everyone.”

Her scores of zero from Naral Pro-Choice and one-hundred from the pro-gun Virginia Citizens Defense League reveal the senator’s more partisan side. When asked in an interview about the growing pressure on lawmakers to address gun safety in the wake of the Virginia Beach shootings and aborted special session, Chase replied, “If my opponent gets in there, gun rights will be restricted. I would never pass legislation to restrict gun rights. I have always been a strong supporter of the NRA — I mean, the second amendment.”

As a woman who wore a handgun on her hip to present bills to the General Assembly this past session, Chase has never shied away from the attention politicians receive; however, two recent scandals have raised her profile toward the realm of the (in)famous. After criticism of her decision to openly carry a firearm, in a July Facebook exchange Chase wrote, “It’s those who are naive and unprepared who get raped.  Sorry, but I’m not going to be a statistic.” She later said the comment was taken out of context.

When asked about the Capitol Police incident report that detailed Chase’s “irate,” profanity-filled response to an officer who would not permit her to park in a restricted area, the senator warned, “What you hear you can never believe, and what you see you can only believe half of that.” Chase dismissed the report as something that “looks like it was written by Democrat operatives.”

The “Democratic operative” truly plaguing the senator’s bid for reelection is Democratic candidate Amanda Pohl. As a mother of two, social worker, and former hospital chaplain, Pohl doesn’t have the background steeped in party politics one may expect. Her route to this campaign grew out of a decade of frustration with the healthcare system, while serving as a chaplain at Chippenham and Johnston-Willis Hospitals. “I witnessed patients dying of no care. One woman passed because she couldn’t get blood pressure medication and had a stroke. Another had a miscarriage because she had an infection and didn’t seek treatment because she was uninsured.”

Pohl’s top policy priorities nearly mirror those of Virginia Democrats statewide: affordable access to healthcare and renewed investment in public education. While going door to door in her potential future district, one family told Pohl of their agonizing choice between paying for their child’s insulin and putting food on the table. More households complain about miserly school funding and low teacher pay that they fear are diminishing Virginia’s education system. But when asked what exact policy proposals Pohl would put forward to tackle these tall orders, her answers can all too often ring platitudinous.

Other issues Pohl plans to champion serve as reminders of the local nature of all politics. Residents demand better roads, and often ask her to make sure their most hated pothole gets filled should she take Chase’s seat in the Senate. Her answers on infrastructure are more concrete. Pohl wants the state to allocate funding towards building out rural broadband. One may not expect farmers in Amelia who cannot utilize the latest GPS-based agriculture technology to be a chief concern of a Democratic candidate, but Pohl isn’t running in a blue district.

The reliably Republican Senate District 11 has lately lurched leftward to become contested territory. Local political pundit Chaz Nuttycombe believes “SD-11 is the toughest competitive lift in the State Senate.” After stumping for Trump with fifty-three percent of the vote, in 2018 voters chose to reelect Tim Kaine over his conservative challenger for the Senate by less than one percentage point. Redistricting shifted the district to lean Republican by 5.4 percent; however, that statistic is based off of 2012 voting patterns which have since been thoroughly scrambled by demographic changes and the flight of suburban voters from the GOP.

Based on his analysis of the race, Nuttycombe added, “Democrats would be ecstatic if Amanda Chase loses her re-election bid this year. Unfortunately for them, she represents a pretty red district. 2019 is not going to be a repeat of 2018: the turnout for this election will be much lower. Chase’s ‘parking scandal’ [with the Capitol Police] has made her more vulnerable though: Republicans in the area are very unhappy with her. I see it as a Lean R race: upset possible, but unlikely. It’ll almost certainly be a single-digit race.”

The giant red yard signs plastered along the district’s main thoroughfares would have one believe that Chase is the frontrunner. Yet recent campaign finance filings show Pohl has nearly four times more small dollar donors — a proxy for grassroots enthusiasm among voters. Besides their names and their brands as moms out to clean up Richmond politics, the two candidates in Virginia’s 11th Senate District have one more thing in common: they’re both convinced they are going to win in November.

Over a month after the movement began, Richmonders continue to take to the streets and protest police brutality against the Black... READ MORE

No, but seriously -- what was that monument in Meadow Park that protesters pulled down last month actually about? Was it a Confederate... READ MORE