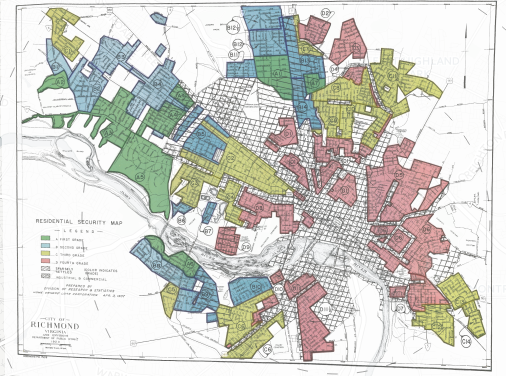 The economic policies of the New Deal helped to bring America out of the Great Depression and set it on course for a post-war economic boom. They also codified systemic racial discrimination throughout the South, and RVA was no exception to the rule.

The economic policies of the New Deal helped to bring America out of the Great Depression and set it on course for a post-war economic boom. They also codified systemic racial discrimination throughout the South, and RVA was no exception to the rule.

“Mapping Inequality,” a project spearheaded by University of Richmond’s Digital Scholarship Lab (DSL) references the work of scholars at multiple universities. It aims to give the public unprecedented access to the maps and documents created by the Home Owners’ Loan Corporation (HOLC) in the early days of the New Deal. They detail just how specific the government was in targeting communities of color as they aimed to recover from the Great Depression.

Previously, citizens and scholars would have to personally visit the National Archives in Washington D.C. to access these documents, but “Mapping Inequality” allows anyone to look at these maps city by city in a convenient and accessible format.

These documents, created between 1935 and 1940, ranked neighborhoods on how eligible they were to receive mortgage loans under New Deal policy.

They are also the origin of the term “redlining,” the practice by which marginalized communities, especially Black communities, were systematically denied housing loans because of claims that they were “high risk.” These neighborhoods were outlined in red on HOLC maps. 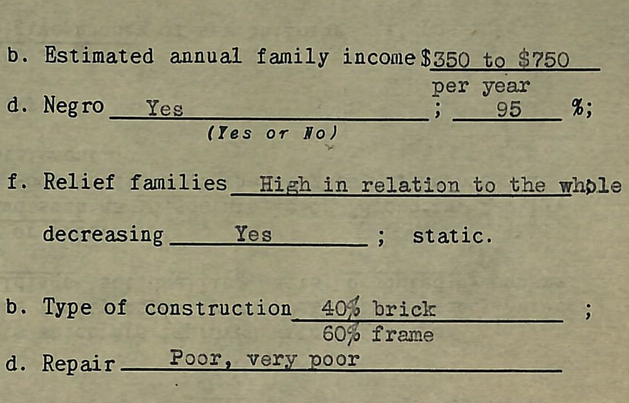 Contributing scholars to the project include Robert K. Nelson, LaDale Winling, Richard Marciano, and Nathan Connolly, and others.

Robert Nelson heads the UR DSL and worked as a co-editor for the project. But “Mapping Inequality” isn’t an isolated piece of scholarship- it’s actually just the latest piece of a larger project called “American Panorama.”

“We’re in the process, still relatively early in it though we’ve been working on it for years, of [building] a larger atlas of US history,” said Nelson. “‘Mapping Inequality’ is the fifth map we’ve released as part of that. The first four we released at the end of last year.”

The previous maps highlight the movement of people throughout the history of the United States as a whole, drawing particular attention to marginalized groups, as in the map examining the forced migration of enslaved people in the South in the fifty years leading up to the Civil War.

The DSL’s study of redlining began in earnest, says Nelson, when John Moeser, a fellow at Richmond’s Bonner Center for Civic Engagement and a longtime professor at VCU, shared with him some documents from the HOLC over lunch. The documents, forwarded to Moeser by one of his graduate students named Richard Sarahan, were available to the public, but only accessible at the National Archives.

The documents prompted Nelson to gather scholars from UR and University of North Carolina in 2011 and begin an index of the materials created by HOLC. After that, they needed copies of the documents for their work.

“We slowly got scans of the maps and got scans of the area descriptions,” said Nelson. “It’s gotta be less than ten thousands scans, but it’s a big job, just to get the scanning done, to say nothing of working on the site itself.” 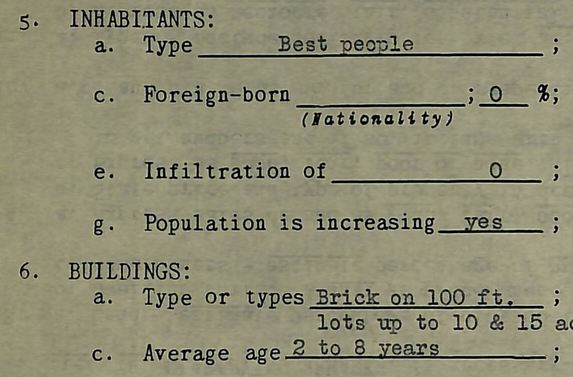 A scan from a document reviewing the Windsor Farms neighborhood in the near West End. The White neighborhood was considered fill with the “best people.”

Of course, that’s just the source data. Nelson explained that the team then had to geo-reference the locations on the HOLC maps with modern maps in order to effectively overlay them. This involved 72,000 control points.

After that, they still needed to define the neighborhoods indicated on the maps with polygons- which involved 229,000 vertices- and then do the data entry that would give the public access to the information.

“Which is to say nothing of getting this organized, designing the site, and building it,” said Nelson. “Which is a pretty significant undertaking. You know, that’s what we do, but it takes a long time, a lot of thought.”

Looking over the documents, Nelson thought that one Richmond neighborhood rating in particular stood out. He pointed to William Byrd Park, Districts C3 and C4, and the neighboring Randolph neighborhood.

“The explanation for Byrd Park says that the area is yellow because negroes- that’s the term they used for African Americans- travel back and forth to get to Byrd Park,” said Nelson. “And because the school is in Randolph, the African American neighborhood, and for that reason, losses on property are being taken. It’s explicit acknowledgment that it’s not just the presence of African Americans as neighbors that negatively affects these assessments from HOLC’s perspective, it’s even the proximity of African Americans. Not just as residents, but as pedestrians.”

Brent Cebul, a postdoctoral scholar at the Digital Scholarship Lab, is looking over all the information the Lab has generated to establish a future direction for research.

Up next, he says, is an examination of urban renewal, a Federal program that began with the Housing Act of 1949 and operated through the 1960s, which cut through Black neighborhoods with surgical precision in the name of highway and industrial development.

John Moeser, who initially introduced the HOLC documents to Nelson, pointed out that this targeted “violence” applied to HOLC redlining as well. He pointed out Jackson Ward specifically, which was populated by Black lawyers, professors, and skilled labors, living together in a mixed-income neighborhood.

“Jackson Ward was the single largest African American neighborhood in Richmond and it was a separate city together,” he said. “It had its own economy. There were several Black-owned banks, there were department stores, law firms, insurance companies, and by the same token you had skilled labor and poor Blacks but they all lived in the same neighborhood.”

“Prior to the 1930s, most Americans were renters and in order to buy a home, most mortgages were about ten years, and you had to put down a very sizable down payment- it really wasn’t something that was available to the vast majority of Americans,” said Cebul. “And what the HOLC redlining did wasn’t simply deny mortgages to people of color, immigrants, it created new forms of wealth through mortgages for a set of people and it really in many ways created the middle class.”

So HOLC’s redlining practice not only prevented marginalized groups from receiving capital, it also moved capital towards approved groups in an historically unprecedented way.

The HOLC documents paved the way for the economic history of the 20th century. “In a lot of ways, the homebuilding and home mortgage economy was the strength of the United States,” said Cebul. “It was the engine that drove consumption. It created the booming cold war economy. I’m not sure what the United States would have looked like by 1960 if these lending practices weren’t created, but they were created with these incredibly inborn racial biases that just kept several sections of the population from enjoying the same benefits.”

And so the DSL’s future project examining urban redevelopment is really just the next chapter in this economic history. Moeser pointed out that the effects of bigoted economic policies don’t just disappear.

“You may have a new law that prohibits all that stuff, but it doesn’t just overnight lead to reconfiguration of neighborhoods,” he said. “There are a lot of factors involved- another of course was urban redevelopment, with highway building, and these highways went right through Black neighborhoods, either destroying them wholesale or cutting them in half.”

“It was a very conscious action, routing these highways,” said Moeser. “They could have been routed in other ways, but they deliberately cut through Black neighborhoods.”

Ultimately, Nelson hopes that the data in “Mapping Inequality” and in “American Panorama” gives people the data they need to see that economic inequality doesn’t just happen on its own.

“Mapping Inequality” shares a history that is nationally important, but deeply relevant to Richmond. With interactive maps freely available, it creates an opportunity for Richmonders to understand our city in an unprecedented way.

The eleventh and penultimate installment in a monthly series in which a hometown Richmonder who has spent over a decade abroad explores... READ MORE

The eleventh and penultimate installment in a monthly series in which a hometown Richmonder who has spent over a decade abroad explores... READ MORE