An Open Letter from an African Writer, To the Chesterfield Restaurant Owner Who Ruined My Day - RVA Mag 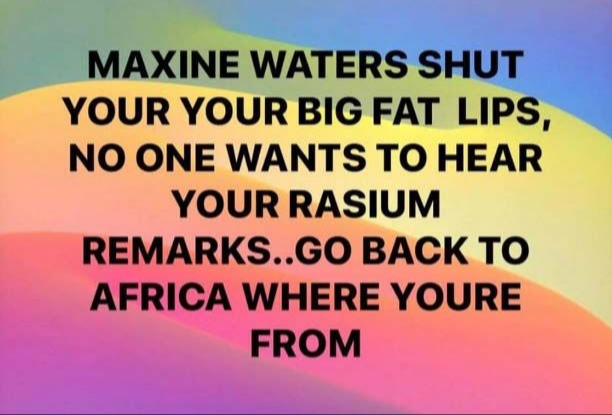 You’re the owner of Caddy’s Restaurant on Midlothian Turnpike. And you just posted this absurdly racist comment directed toward black Congresswoman Maxine Waters.

“Maxine Waters, shut your your big fat lips, no one wants to hear your rasium [sic] remarks…Go back to Africa where you’re from.”

I’m actually from Africa, born and raised in Takoradi, Ghana, and I’m really disappointed you made such comment. You are a restaurant owner, therefore people look to you to represent your community. You may not know how impactful you are to others, but you are influencing your community through your actions and words. And this is what you teach them? (Also, maybe learn how to spell. “Rasium” is not a word.)

Enough with the racist comments and stereotypes about Africa. Every action has its own consequences and you, Becky, are responsible for yours. When the President started making racist comments about Africa (remember the “shit hole countries” remark?), people were upset, but people like you simply didn’t care, because unlike me, you didn’t have to. I think it’s time the world and America learns the truth about Africa.

In case you didn’t know, history shows that Homo erectus (one of the earliest species of humans) were the first of the hominins to emigrate from Africa. From 1.8 to 1.3 million years ago, this species spread through Africa, Asia, and Europe. One population of Homo erectus, also sometimes classified as a separate species Homo ergaster, remained in Africa and evolved into Homo sapiens–the human species as we know it today. Each and every one of us originated from Africa, the continent you despise so much. Before you come at someone with such a racist comment, do your research.

You technically don’t belong here, either. From the time settlers first stepped foot on these shores, America became a country of immigrants. And if you think Africa is a slum, you’re wrong. It is a beautiful continent, filled of rich countries with rich cultures and educated, loving individuals with principled morals and values.

Hearing someone say this to another human is deplorable. America is not white. The immigrants, the people who created, built, and designed this country make it great. The food, culture, dance, music, and so much more were brought here by people like me. It was not born here. I see aspects of my own Ghanaian culture filtered through American, Virginian, and Richmond culture every day.

If you want to destroy your business by being racist, then good luck. Prior to your deleting these posts, your social media page revealed a history of offensive and controversial comments.

“I am not a racist, I believe every home should have a color TV,” you said in a post. What exactly are you suggesting? Do you really not think this is derogatory to people of color, therefore qualifying you thus?

Another of your posts said, “I’m proud to be white. I bet no one passes this on because they are scared of being called a racist.”

Last month, you shared a post voicing your agreement with TV star Roseanne Barr, after Barr’s racially-insensitive comments on Twitter. Haven’t you done enough harm already? In a response to someone’s criticism on Facebook, you said, “Sorry. If everybody else can speak what they think, I can too. It is a country that we have freedom of speech and I use quite often.” Just because we have freedom of speech doesn’t mean you have anything of value to say. There are and there always will be consequences to your words. Your one Facebook post just ruined the day of a young African girl.

Have you actually sat down to think about how you feel when someone hurts you? Yeah Becky, words really do hurt. They can make or break an individual.

An actual person from Africa.