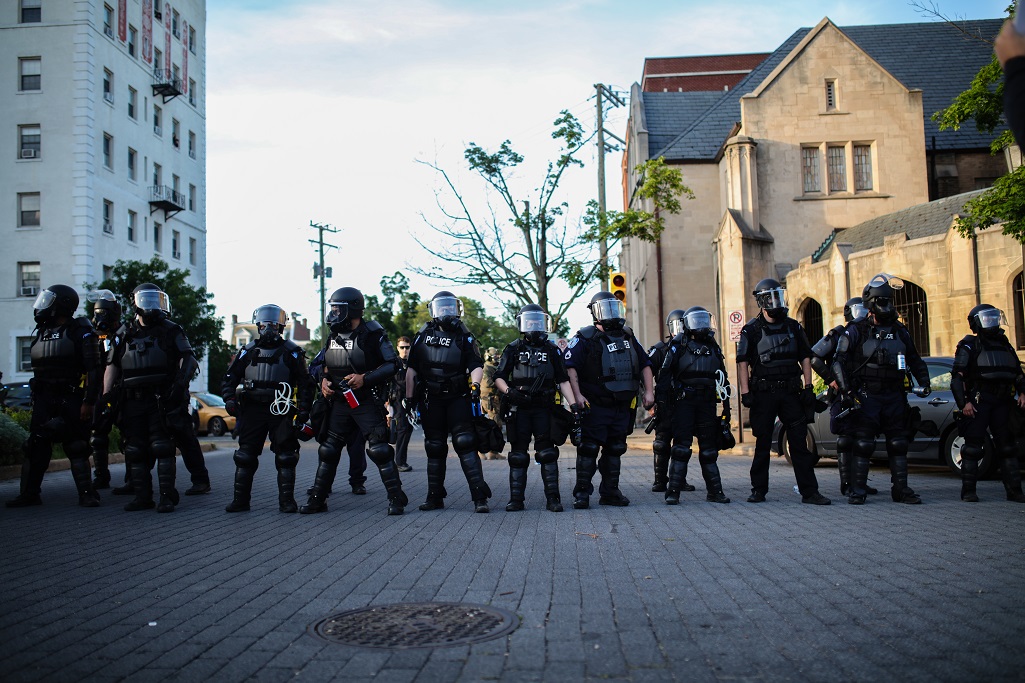 Retired law enforcement officer Brett L. Saunders says, “We all must work towards stamping out intolerance around us” — and that it’s particularly important for police to check themselves and their peers.

Let me begin by saying that I’m an old, white, retired law enforcement officer. I probably have more life experiences in common with the men and women in uniform than I do with the thousands of protesters who are facing those officers every night lately, in cities across this country.

In my 30-plus years in law enforcement, and in the time since I retired, I have never liked to publicly comment or speculate on other officers’ contacts with the public. Too many times, a small portion of a much longer interaction is taken out of context, or distorted by emotion, intoxicants, or time, to the point that even some of the situations I have been involved in have been almost unrecognizable when retold at a later date.

That said, I cannot in good conscience keep silent when the images of some police officers that I see on television and social media are so blatantly wrong and unjustifiable. I know that, at times during my career, in the heat of the moment, I have let slip a curse word (or three), or said something else really stupid, but I prided myself that I was a professional law enforcement officer. I would never treat someone differently because of the color of their skin. I was always very conscious of using only the amount of force necessary to affect an arrest, and of treating everyone that I came in contact with fairly. In my pride, I felt that I was above the “racist cop” stereotype.

But did I do everything I could to make the situation better? I have met some racist officers. I’ve heard comments in passing from other officers, but I said nothing. These officers were not in my department, and I felt it was not my place to say anything. But in keeping silent, I was tacitly supporting their racism. For that matter, in my personal life, I’ve heard the “N word” used by older relatives, and even heard racist comments and jokes made in church by people I respected, each time saying nothing. That will stop, for me, now.

It’s not enough for us, as individuals, to treat everyone with the respect due a fellow human being (although that would be a good start for some). We all must work towards stamping out intolerance around us; speaking up when we see someone being discriminated against because of race, religion, creed, sexual orientation, or any other unimportant difference that small minded people use to distinguish “us” from “them.”

Is this easy? No. Not at all. Especially not in the law enforcement community. If I correct someone in the grocery store, the barber shop, or even church, I’ll be labelled as that cranky old jackass who should mind his own business. Law enforcement is different, though. It is a paramilitary community. In this structure, new officers are expected to learn from more experienced officers. And a law enforcement officer’s life can literally be dependent upon other officers’ support. Speaking out can be a career breaker in some situations.

If a department has systemic racism, it has to be weeded out in all facets of that agency; from the supervisors, to the trainers, the grunts, and the recruits. It is not enough for a class on Bias-Based Policing to be taught in the Basic Academy, or in an In-Service class — which is the bare minimum in most places. Intolerance cannot be allowed to grow in the quiet corners of any of our lives.

In spite of my 30 years of law enforcement cynicism, I believe that we can all do better. I have traveled to other parts of the country where civil rights seem to have been suspended in time from 50 years ago, but in my corner of the world, things have gotten better. Not perfect, but better. And it will continue to get better if we all shine a light on intolerance, and don’t allow it to go unacknowledged.

Brett L. Saunders was a law enforcement officer for over 30 years, retiring from the Virginia Department of Game & Inland Fisheries in 2016 as a Master Officer. He was a Field Training Officer and an instructor at the DGIF Law Enforcement Academy from its inception, developing and instructing the curriculum for Bias-Based Policing, Ethics, and Officer Survival. Officer Saunders was named Conservation Police Officer of the Year in 2009. He is now retired and living in Southside Virginia.