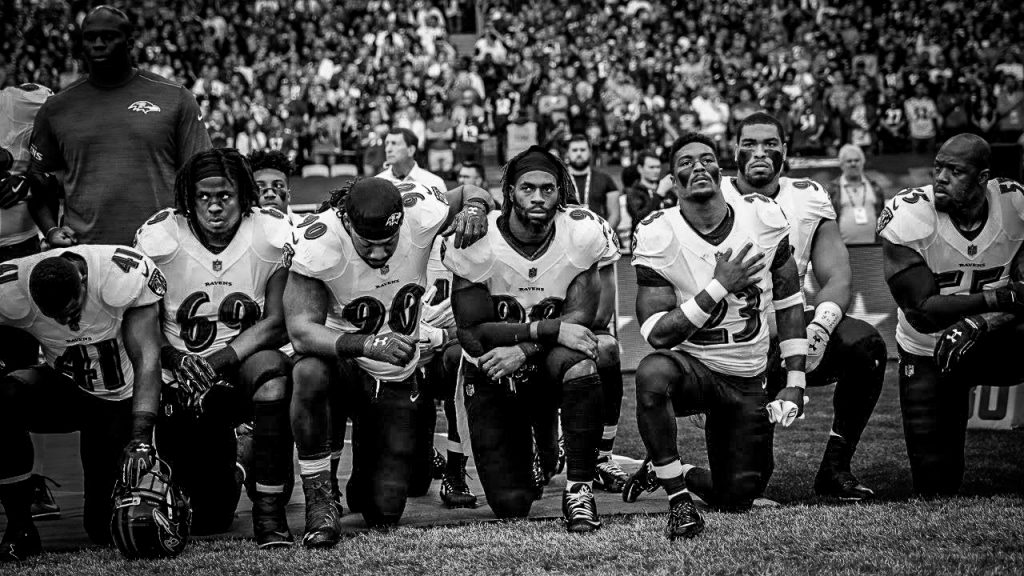 On May 23, the NFL ‘unanimously’ gathered to announce that during the national anthem, all players must stand in attendance or wait in the locker room. The decision came without prior counsel from the national players association, as well as the players’ coalition, despite the three parties, up until last Wednesday, having seemed to have found some kind of resolution on the issue. The NFL, after all, agreed at the end of last year, to give $90 million to aid the players’ community activism.

While the NFL expressed that this was made to avoid interjecting politics into players’ lives, the decision ultimately comes with a stroke of irony; in trying to depoliticize the issue, they politicized it in the worst of ways. And to make matters worse, just yesterday, President Trump, canceled the upcoming ceremony with the Super Bowl Champions, the Philadelphia Eagles at the White House. He tweeted, “They disagree with their president because he insists that they proudly stand for the National Anthem…”

While I agree kneeling may take away from the national anthem, bullying and cajoling players into a respectful silence is un-American at best, and a sign of deep insecurity at worst.

Nonetheless, the NFL commissioner, Roger Goodell, doubled-down on this ruling, stating that they have been “sensitive enough” to the player’s “choices” but demand that they stand during the anthem. “We want people to stand — and make sure they treat this moment in a respectful fashion,” said Goodell shortly after the ruling.

As a private entity, I get it: The NFL does what it can to protect its brand and their financial bottom line. They’re not social warriors, their job is to entertain and make money doing so, anything else is considered a threat.

And to double down on my own statement, I can see where this makes sense: After all, the NFL is hurting in the ratings, (another 9.7 percent drop during the 2017 season). With reports of declining viewers and backlash over the league’s handling of traumatic brain injuries, increasing reports of domestic abuse, and nearly half of parents now looking to distance their children from football due to the risk of brain injury. With attacks on their current players and their supply lines, it’s obvious the NFL has never been more desperate to return to its former glory; where the intersections of contemporary life never presented themselves.

But that is not the world we live in anymore. With this recent ruling, it is clear who the NFL believes their “core” fans to be and who they expect to protect their brand moving forward.

Not the legions of young engaged people who level with the league’s players on the same issues – police brutality and state-sanctioned violence – offering a deeper connection between them as they become the new generation of NFL viewers. The NFL could have had a vision that took its viewers into the 21st Century.

Yet they chose those fans who were already leaving – disproportionately white, male, and conservative – who drool over the drenched faux-patriotism as an escape – and those who can use this issue to continually justify their racism.

But let’s be clear: This decision did not happen in a vacuum.

No public quarrel of this magnitude was possible without Trump. On numerous occasions, he demanded that the players face expulsion from both the league and apparently the country.

Any president who calls a player a “son of a bitch” on live television for expressing their rights to free speech is, put simply, a clown. While the public responded with the usual skepticism to another daily twitter rant, the downstream effect was not lost on certain team owners.

Cowboys’ owner Jerry Jones, as well as Dolphin owner Stephen Ross, in a series of depositions gathered by the Wall Street Journal, attributed much of their decision to forbid their players to protest out of fear of the president’s ire.

Despite this, the legalese behind this decision is hardly on firm footing, which also factors into how we should perceive this issue.

On May 21 of this year, Epic Systems Corp v. Lewis ruled in favor of free speech in the private sector. The ruling stated: “Employees shall have the right to self-organization, to form, join, or assist labor organizations, to bargain collectively through representatives of their own choosing, and to engage in other concerted activities for the purpose of collective bargaining or other mutual aid or protection.” Whether it be kneeling or the Macarena, the ruling addressed that self-organization to protest and demonstrate are protected under our labor laws.

Even still, are the players’ method of protest that unethical and disgraceful to our sensibilities as a country who values and protects free speech? What if Colin Kaepernick protested not against the police killing of black males, but the undervaluing of our troops or maybe the ineffectiveness of our veterans affairs system? What if a player kneeled to protest abortion?

Would people have come out with the same uproar? Of course not.

Because in America, it doesn’t matter what you are protesting, but who is doing the actual protesting. Herein lies the major difference and begs the question: When have black people ever been able to protest without an overwhelming hostility from traditional American institutions like the NFL? In making this decision, the NFL has only legitimized a vicious cycle of inequality that ironically marginalizes around 70 percent of their players. That is not only morally reprehensible, but runs contrary to the entire American experience.

These players took a knee in good faith, to support those in their community who have suffered a form of state-sanctioned violence. There is little question that this is true. In 2017 alone, police killed 1,147 black people accounting for 25 percent of those killed, despite representing only 13 percent of the overall population. The role of law enforcement in this country has overreached and most people would agree on that.

So why can’t we pause a fucking sporting event to address this critical issue? White people must speak up and be strong allies, regardless of the sanctity of your sporting event; which, let’s be clear, did not interject overt patriotism until the Pentagon started signing contracts with pro-sports leagues in 2012.

As a millennial raised in a military family, the topic of patriotism can cause some internal dramas, as I am sure it does for people like me who grew up on various bases all over the world.

I commend the troops risking their lives, but I believe no one should be forced to stand for the anthem. Soldiers and police serve to protect this very freedom and no one person should be required to value or even honor the freedom that they have. To think differently is to enter into the realm of the kinds of authoritarianism prevalent in less democratized countries; enforcing freedom doesn’t make much sense. And sorry, but just because of any one players’ achievements doesn’t give us the right to reduce their freedom of expression in whatever form it might take.

Not to mention these players have made it abundantly clear they are not protesting our military, but a system of racism that develops into black and brown people being killed by the police at disproportionately high numbers.

When Roseanne Barr grabbed her crotch after a shrieking mockery of the national anthem, she called it a joke, yet managed to have a long career afterward. Yet when Kaepernick kneels, he’s immediately tossed away from the league and graces of fans, even having to file a list of grievances on the grounds of owners in collusion to keep him out.

From another perspective, maybe we don’t deserve someone like Kaepernick, who gave up his career to draw attention to a cause we all know to be true. Maybe he represents the best of an American that has been acknowledged only in the study of civic responsibility.

Patriotism can’t be forced, especially not by rich billionaires telling predominately black athletes how they should exercise their patriotism just because the clock is running.

That’s not a compromise. It is a distortion of everything that actually makes America great. But those who disagree understand privilege as having the privilege to salute the flag. And that has come to be the uncomfortable truth.

Either way- come September- the choice of standing or remaining in the locker-room during the anthem won’t change anything-  you don’t think those same shit-kicking fans won’t notice? You think Trump won’t stop tweeting? This is only the start. But as a warning to any of those who continue to berate these protests, I say this: watch your words very wisely. You do not want to be on the wrong side of history with this one.