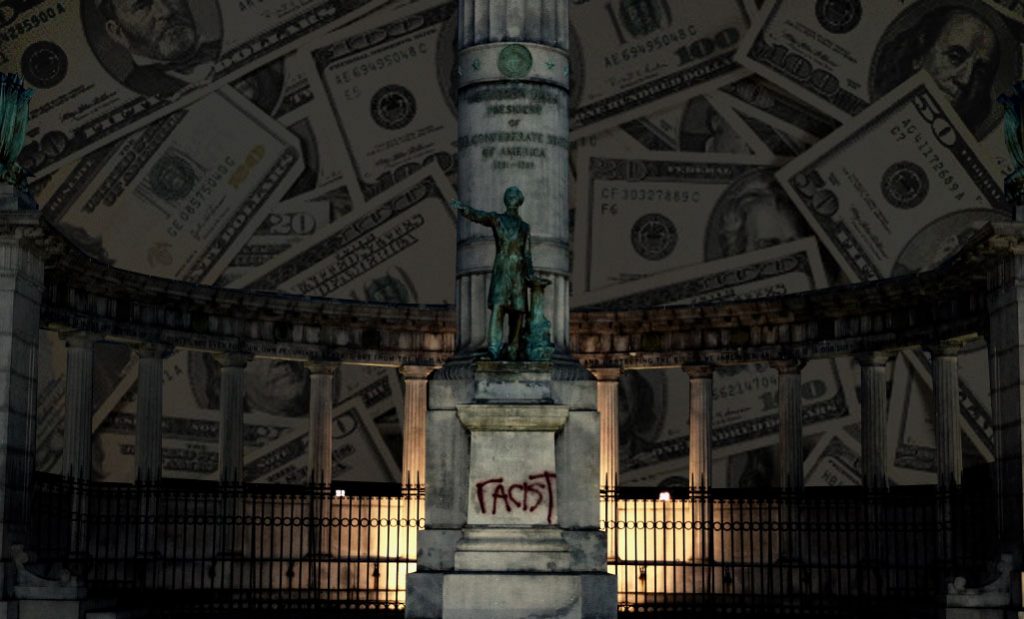 “Rather than focusing just on Monument Avenue tonight, I’d like us to take a look at the landscape of the city,” said Bill Martin, Director of The Valentine Museum. “So, if you’re here to talk about the removal of the statues, you’re in the wrong place.”

Martin, along with Richmond Magazine, Capital Region Collaborative, Kelli Lemon (Coffee With Strangers) and VCU professor John Accordino, made up a panel for an event Monday evening meant to highlight the connection between monuments and tourism in the city, as part of its ongoing Controversy/History series.

Instead, it exposed the deep divide that exists within Richmond, born from the construction of six Confederate statues on Monument Avenue more than 100 years ago.

These statues have inspired countless protests in the River City, rallies crowded with Richmonders condemning the monuments, and even spray-painted graffiti on multiple monuments — all for the sake of drawing attention to social and racial justice.

The Valentine Museum fell short of appropriately applying history to today’s issues and addressing the racial charge behind these monuments, and instead, focused mainly on the history of monuments in Richmond, and later, on the economic value of the Confederate statues.

The museum, along with its partners, polarized entire groups of Richmond citizens by discussing the topic of monuments as a niche academic issue, when it is an inherently political one.

The event began with a clarification from Bill Martin that the evening would not be about the controversy surrounding the statues on Monument Avenue, but instead a discussion on Richmond’s elaborate history of building monuments.

And yet, throughout this history lesson, Martin danced around the topic of Confederate statues. He specified that only the Robert E. Lee monument was planned — it was the only one with a roundabout. Everything else came years later, he said.

However, at one point, Martin did touch on the opposition to the Lee statue. The opposition was voiced by Kelli Lemon quoting John Mitchell, Jr., an African American who was once editor of the Richmond Planet, a newspaper founded in 1882 by 13 Richmond African Americans freed from slavery. In a May 1890 article, Mitchell wrote the statue was a “glorification of a lost cause“,  which Lemon voiced to the audience. It’s here that The Valentine succeeded, if only for five minutes, in mentioning racism and Confederate statues in the same breath.

What was promised to be a simple history lecture quickly turned into a spiel on the value of historic tourism, by John Accordino, Dean of VCU’s L. Douglas Wilder School of Government and Public Affairs.

There is undeniable value in what, Accordino calls “heritage tourism” — tourism designed to let tourists experience places and activities that authentically represent the past and present to the people that live there. And according to Accordino, heritage tourism brings in over six billion dollars in Virginia every year.

Accordino also conveyed at the event, that Richmond’s Confederate statues could be used as heritage tourism if represented the right way.

“Richmond’s Confederate monuments do not offer an experience, or tell a Civil War story — as they did not exist during the Civil War,” he said. “But they do remind us of the story of a lost cause, which may attract heritage tourists.”

Accordino emphasized that Berlin, Germany could serve as an example to appropriately provide heritage tourism, and still make money. He used the example of stumbling stones in Berlin, which are brass plates embedded in the sidewalks, inscribed with names and life dates of those persecuted and executed by Nazis.

They are meant to remind citizens of the tragedies in Germany’s history. In Accordino’s opinion, it is possible to do something similar here in Richmond.

“Taking on and accepting parts of your history is important,” Accordino said. “I don’t think we want to take away history. I want to tell the complete history, and acknowledge our full story.”

There are several things wrong with this statement. First, Accordino compares the Confederate statues, built in the 1890s, to Berlin’s stumbling stones, built in the mid-1990s. These are two extremely different monuments — one is to commemorate the victims who were murdered during the Holocaust, and the other is a symbol of the glorification of Confederate generals, who, at the time, fought for the preservation of slavery.

Inscribed in Jefferson Davis’ statue on Monument Avenue are the words “crescit occulto velut arbor aevo fama”, which means “may it grow as a tree through the ages.”

The inscriptions on stumbling stones or “Stolperstein”, are tiny square brass bricks, each one inscribed with the name and life dates of victims of Nazi extermination or persecution located at their last place they lived or sometimes worked. One commemorates those who died in concentration camps, not those who advocated the oppression in the first place.

They do not memorialize the greatness of those who once believed some humans were lesser than others.

Second —  and this is most important — none of the people who should have been there for this conversation were there. Thanks to some questions answered by the audience using clickers in the beginning, I found that 74 percent of the audience was white. Forty-three percent of them made more than $100,000 per year, and the rest weren’t far below.

The Valentine Museum had opened up this conversation about how monuments could help with tourism, and refused to talk about what they mean in today’s conversation over race and social justice. On top of that, there were such few people of color there who could actually insist on having a conversation about these issues.

Instead, it was one white man telling an audience full of rich, white people that they could appropriately tell the story of slavery and oppression of African-Americans, while still keeping the monuments up, while still making money. All the while still memorializing Confederate generals who fought for slavery.

At the end, Accordino opened up the panel for questions. Susan Winiecki, of Richmond Magazine, moderated the event. She called on an African-American man who — finally — voiced the thoughts that had been festering in me since the beginning of the event.

“I feel sick,” he said. “The only time you talked about the systemic racism that relates to me is when you mentioned Jim Crow, softly,” the man said. “You’re thinking too much about cost-benefit analysis and not enough about human-benefit analysis. You’re saying we should create tourism based on those that have been and continue to be exploited.”

Accordino and Winiecki, comically, were at a loss. Winiecki kind of just stood there — and Accordino fumbled to reassure this man that he wasn’t trying to undermine anybody.

The worst part is, I don’t think the entire panel even realized that the discussion they’d been having for the past hour and a half was so wildly skewed — because it was an academic lecture for the privileged, by the privileged.

There was such little mention of race, of poverty, and of oppression. Instead, most of the discussion was about money, economics, and history. Had they even thought about how the words they’d written down would sound, once they spoke them out loud?

The Q&A section moved on without any further controversial comments. It was easy to pretend the African-American man, in the beginning, had never spoken.

A lady in pearls and a sweater set raised her hand and said she thought it was a good idea to make money off heritage tourism like the statues, then use that money to tell the “full story.” She called it an investment.

I left thinking about how deeply some people had buried their heads in the sand, convinced that they knew what the solution was when they’d never even really seen the problem.