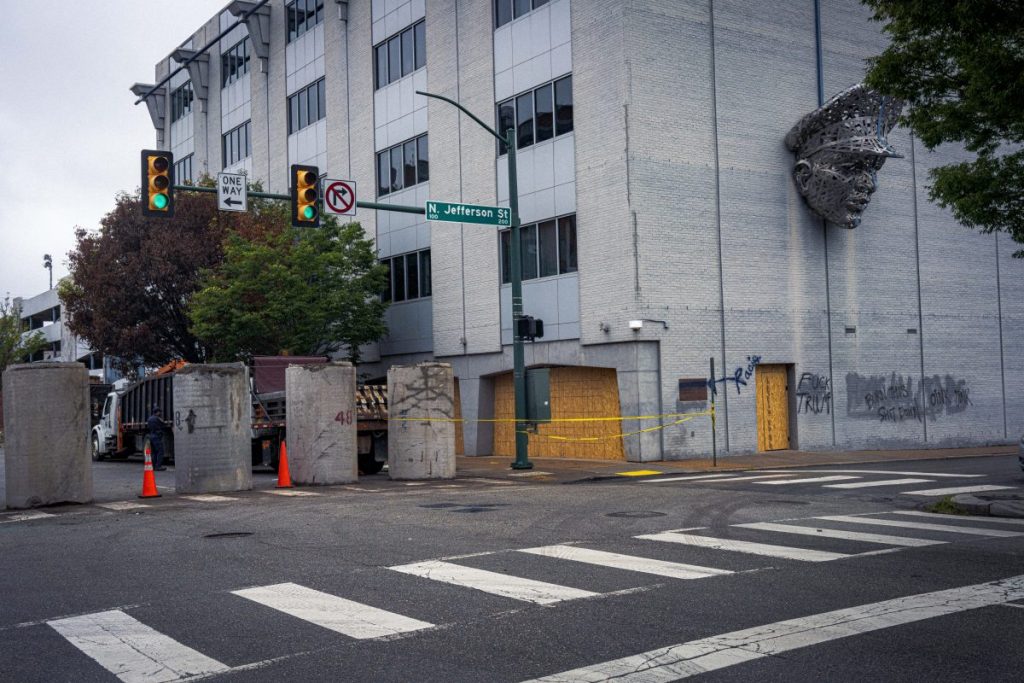 At a time when Confederate monuments around the city are coming down, VCU Anthropology professor Amy Rector and Landon Shroder ask why the Richmond Police Department are behaving like an occupying army.

Yet over the past few days the Richmond Police Department (RPD) HQ on Grace St. has erected new monuments — ones that are uniquely befitting an organization which believes they are at war. The new interim Chief, William “Jody” Blackwell, confirmed this at his presser yesterday when he said the RPD is going to “take our city back… and we’re going to get the city back.”

The huge concrete barriers filled with gravel and dirt earthworks provides an impenetrable wall which cuts Grace Street in half, effectively shutting down a major thoroughfare in the city. Looked at another way: it is a militarized position, organized to provide space for the RPD to defend their area of responsibility since they clearly believe they are under siege. The barriers are not just physically imposing however, they are also intended to send a message to the same community they are sworn to protect.

Humans have been putting up monuments for 8,000 years for this very reason, to psychologically oppress their foes and to remind the lowest status individuals of their place in society.

With the fortification of the RPD, the police aren’t just waging warfare with protestors who arrive unarmed seeking to voice a desperate need for change in our system, they are also waging psychological warfare against an entire city. They are signaling that they are bigger, stronger, and can impose their will upon a city that is demanding reform, accountability, and oversight of a police culture that has seemingly gone rogue.

Far from making them look strong, the fortifications at the RPD have instead made them look weak and ineffectual — incapable of exercising authority from a place other than violence.

It is the same idea that raised the statue of Confederate General Robert E. Lee six stories high in 1890, when Monument Avenue was only a tobacco field. The Lee Monument Association wanted their Lost Cause fiction to be bigger and stronger, using the same tactics of psychological warfare the RPD is using today in Richmond. Nothing has really changed in the past 130 years.

Three weeks ago, after the murder of George Floyd, the racist vein that runs so deeply in all facets of American society was laid murderously bare. So much so it could no longer be ignored, and inch by inch Americans have brought to the surface a reckoning that has been simmering for 400 years. Nowhere is this more relevant than the conversation surrounding the culture of policing, which is outdated at best and villainous at worst.

Recovering our safety from a “law and order” mindset that disproportionately kills our Black community members, while also reclaiming public space from narratives of oppression, is part of a drive towards truth and, perhaps one day, reconciliation — something that is centuries overdue in America.

Unfortunately, our city’s institutions have been silent to this reality. The resignation of Chief Will Smith — who proved to be entirely unequipped to lead a city seeking meaningful reforms, account for his officers, or engage positively with peaceful protestors — has done nothing to confront the underlying reality that the lives of our Black community members are disproportionately at risk from interactions with the police.

When those fighting for justice and a more equitable future are chanting “Whose streets? Our streets” and are met with only platitudes from the Mayor and concrete barriers from the RPD, then there can be no “community engagement,” as Mayor Levar Stoney called for at his presser on Tuesday.

This is now evident from the monuments the RPD has erected in their own image. Juxtapose this against the backdrop of a truly transformational moment of trust-building, healing, and reconciliation happening only a few blocks away at the monument to Robert E. Lee.

For three weeks this Confederate statue and monument to white supremacy has become a living piece of art, a place of pilgrimage, and a reclaimed space for all those in Richmond who were excluded from public life. Black citizens who have lived in Virginia their entire lives are now visiting the statue for the first time, standing on its steps, and taking photos with their fists in the air to commemorate this moment in our shared history.

And for the first time in this statue’s history, it truly means something to everyone. There is a deeper meaning in this than there ever was for a six-story tall racist statue dominating the city’s skyline.

Yet across town, the RPD has put up its own monument to militarization, just like this city’s forebears, who were looking to signal, intimidate, and suppress a portion of their population. When the interim chief uses the phrase “take this city back” how else are we supposed to interpret this? Especially when egregious police violence has been the default setting of the RPD these last few weeks.

But there is another way: the RPD could take note of what is happening at Robert E. Lee and work towards meaningful de-escalation, starting with removing their fortifications and not treating the city like they are an invading army and its citizens the enemy.

The path is clear. It is time for the RPD, like other police forces nationally, to accept that reforms are coming one way or another. Taking down monuments and barriers will not arrest the killers of Breonna Taylor or ease the fears of Black mothers when their children leave the house. But it might lead us in a new direction: towards the reality that our city really does belong to all people. There is no place in Richmond for police barricades or shrines to white supremacy — especially since the distance between those two is one of the shortest distances in American history.

This piece was co-authored by Amy Rector, Associate Professor of Anthropology at VCU and Landon Shroder, a communications and foreign policy professional specializing in the Middle East.

Op-Ed: Busted At The Circle

An anonymous protester tells the story of how they got arrested at Marcus-David Peters Circle, and reveals the essentially random and... READ MORE

Op-Ed: Busted At The Circle

An anonymous protester tells the story of how they got arrested at Marcus-David Peters Circle, and reveals the essentially random and... READ MORE