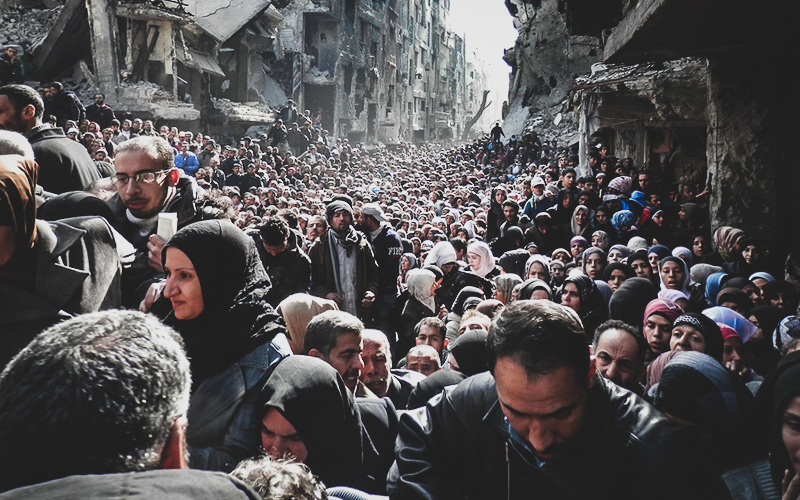 This is going to prove hugely provocative, but it needs to be said anyways; we should be applauding President Trump’s authorization of military strikes against the murderous regime of Syrian dictator Bashar al Assad. Given the commander-in-chief’s inability to command anything, it is hard to write those words, but it is also necessary. Yet buried deep within the cacophony of noise from the punditry and the bloodsport take no prisoner social media contests over the last 48 hours, there is a signal waiting to be found.

What is the signal? Before we journey to find it, we’ll have to decipher some of the complex realities which govern normative international relations theory. However, before we get to that, I can simply say: You cannot massacre your own people with chemical weapons.

For those who are taking full advantage of the first real spring weekend in the Commonwealth (or the Action Patrol reunion gigs) and might have missed the headlines, here is a quick recap.

At around 8:30 PM on Friday evening with support from British and French allies, the US military launched a multi-axis attack on chemical weapons facilities inside of Syria. According to the Pentagon briefing on Saturday morning, 105 missiles were launched in a combined naval and air campaign – from the Red Sea, North Arabian Gulf, and Eastern Mediterranean. The briefings also suggested that all assets landed on their intended locations and targeted research and storage facilities that produce and store chemical weapons.

This strike was in response to a chemical attack launched by the regime on April 11 in Douma, a Damascus suburb, which killed 70 people and wounded over 500. Yet this was not the first chemical attack by the regime. There is documented evidence that the regime first started using these weapons against their population as far back as December 2012. Then in August 2013, there was a sarin gas attack that left an estimated 1,400 people dead.

Time for some of that tediously boring international relations theory: All foreign policy is a calculated long game, one that must effectively balance hard (military) and soft (diplomatic and economic) power over the course of multiple years – sometimes even decades. When then President Obama failed to enforce his “red-lines” on the usage of chemical weapons in August 2013, he opened up a vacuum (like nature, international relations also abhors a vacuum). This vacuum was filled by bad-actors such as Russia and Iran who have a strategic long-game and are not afraid to use all means available to them – chemical weapons included – to achieve their goals and objectives.

Most foreign policy professionals will agree that the failure to enforce the Obama “red-lines” was a disastrous decision for our emerging strategy in Syria. Former Secretary of State John Kerry even went so far as to say publicly in 2016 that “it cost us significantly” in terms of resolving the conflict. Unfortunately, the problem is that without the threat of force, the Syrian regime never really had any incentive to dismantle their chemical weapons programs.

Where does that leave us now in 2018? Let’s circle back to the signal buried in the noise.

The coalition strikes against the chemical facilities of the Syrian regime had to happen, the same way they should have happened in 2013 after the sarin gas attack. There are prohibitions against the usage of chemical weapons going back to 1925, commonly referred to as the Geneva Protocol. Why? Because the extensive use of these agents during WW1 led to the deaths of an estimated 100,00 combatants and wounded up to a million more. This international convention was reintroduced in 1997 as the Chemical Weapons Convention, which prohibits “the large-scale use, development, production, stockpiling and transfer of chemical weapons” – the Syrian regime is in violation of most if not all of these conventions.

So the problem is less about the righteousness of taking out chemical weapons facilities, but having to reconcile it against the entire Trump presidency. He actually said, “mission accomplished” in a tweet in a bout of mind-mumblingly cliched braggadocio. Anyone remember George Bush saying the same thing about the Iraq War? Anyone else wanna comment on how that turned out?

The first thing to remember is that chemical weapons deployment is a method of waging war which cannot be normalized or accepted by the community of nations. Yes, countries will continue to wage war and yes, the methods in which they wage war will still end with countless civilian lives lost in the process. But there is a difference, which is the reason why we also have prohibitions against the use of biological and nuclear weapons.

Chemical weapons and their capacity to kill civilians at a disproportionately higher rate is what separates them from other conventional weapons. According to an analysis by the Carnegie Endowment for Peace, “Under ideal conditions 1 ton of Sarin dropped from an airplane could produce 3,000 to 8,000 deaths”. They are also indiscriminate in their usage, given the inability to control the agent once it has been dispersed, making them not only a weapon of mass destruction, but also a weapon of mass terror. The same analysis also cited a UN report which claimed, “a chemical weapon of 15 tons might kill 50 percent of the people in a 60 square kilometer area.” Then there is the long-term effect of the chemical agents, such as visual impairment, chronic dermatological conditions, long-term respiratory problems, and cancer.

To assume that “red-lines” on chemical weapons should not be enforced, would be to assume that the very same “red-lines” on biological and nuclear weapons should also not be enforced – should that terrifying scenario ever come to pass. Is this something we’re willing to negotiate on as the world becomes more complex and dangerous? That is the conundrum we’re facing and the reason why we cannot allow chemical weapons attacks to go unanswered -Trump or no Trump.

There is no strategy for Syria (not under Obama, not under Trump) and this strike, like the US strike in April last year, was only a tactical pin-prick meant to degrade capabilities not end the conflict. That does not mean we have to let Syrian civilians be killed with weapons of mass terror by a murderous regime that has wholesale slaughtered its own people since 2011.

Trump is a reckless, loutish president, but in authorizing the Pentagon’s strikes on Syria he was justified. Our feelings on foreign policy should not be conflated with our feelings about the president – remember the long game. Nonetheless, there is a bitter irony to all of this. The man who said there were a “few good people” in Charlottesville and the man who demonized refugees is also the same man who can intervene to save civilian lives from chemical attacks.

Regardless of the reasoning, the net result can still be the same: countless lives have potentially been saved by destroying facilities used to make weapons of mass destruction. If ever there was a reason for the awesome power of the US military apparatus to be applied, this is surely it. Progressives who are committed to cooperation among allies and internationalism, as a means of supporting human rights can support this kind of intervention without supporting the president. These two things can exist simultaneously.

Fingers crossed this kind of attack won’t happen again, but recent history has shown us that without consequence there is little hope that we won’t have a repeat of it.