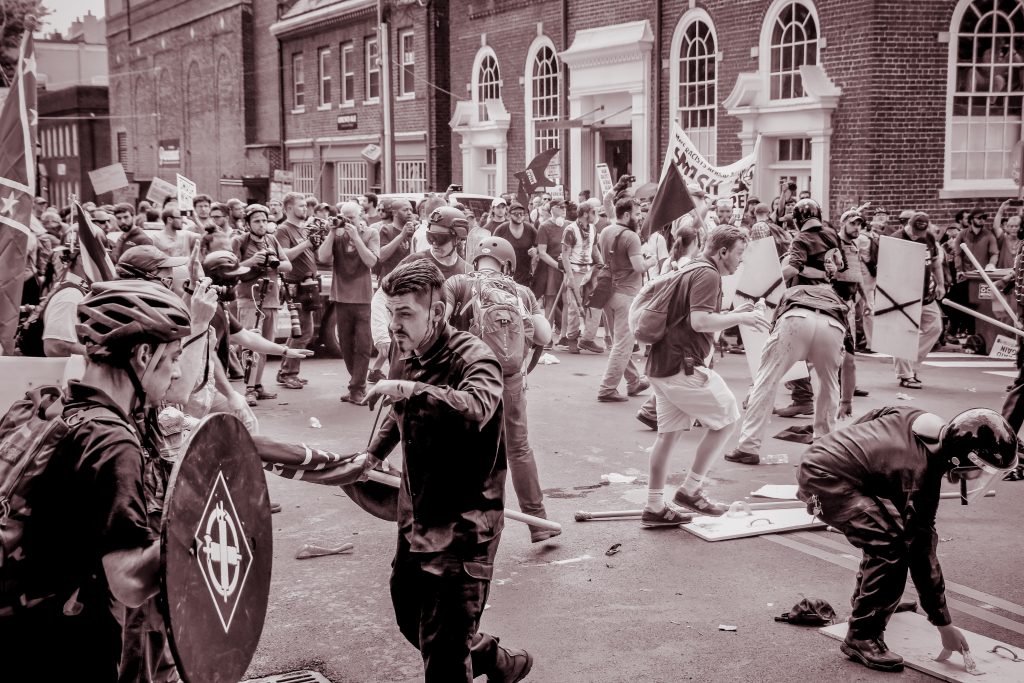 One year has gone by since James Fields, Jr. killed Heather Heyer and wounded 30 others at Unite the Right in Charlottesville last August, the largest gathering of white supremacists and fascists in decades.

Since then, nothing has changed. In fact, things have gotten worse. After the tragedy, there were signs of encouragement that reduced some of the shock. The strong showing of anti-fascists, anti-racists, and the faith-based community in confronting white supremacy on the streets of Charlottesville was heartening, even if many of us believed that this kind of event would be a one-time occurrence.

Unfortunately, that feeling was short-lived. The next day, President Trump took to the airwaves and proclaimed that “there were some very fine people on both sides.” By good people, he meant those chanting Nazi slogans like “blood and soil” and “Jews will not replace us.” And with his statement, he legitimized the fascist ideologies that brought thousands of white supremacists to Charlottesville.

Making synonymous white supremacists, white nationalists, Nazis, and fascists with those who would confront them only served the worst excesses and impulses of the American public.

Can we really feign outrage that there are now four openly anti-Semitic white nationalists, one of whom is a self-identified Nazi, running on Republican tickets this mid-term? This is not a coincidence or stroke of bad luck; these men have been emboldened and legitimized from the podiums of their party. Their message connects with what they hear from the president and the condemnation they don’t hear from other Republican leaders. It has become legitimate. It has become mainstream.

A literal Nazi ran unopposed in Illinois’ 3rd District during the Republican primary. After being exposed, he still received over 20,000 votes from people in his district. Why? Because he ran as a Republican and that was good enough. The particulars don’t matter  (#mainstreaming).

And yet, the mainstreaming of white supremacy since Unite the Right doesn’t stop there. It has seeped into all aspects of our political discourse. One does not have to see a robe and hood or a swastika tattoo to recognize the engine driving this process. In fact, the groups that marched in Charlottesville remain on the fringe and are fractured (for now) even while their views become more publicly accepted.

The new frontline has become the normalization of xenophobia, allowing sensible people to feel like there is a justification for interning brown children and separating them from their parents. It is the “othering” of Muslims in the form of a ban that is wrapped in the guise of national security; it is referring to African countries as “shit holes,” while praising historically homogeneous white countries like Norway; it is the public shaming of black athletes like Colin Kaepernick and Lebron James as unpatriotic and dumb; it is the fusing of populist resentment from the white working class with the worst kinds of nationalism to create a tribalistic worldview that perceives constant threats, both economic and physical, from grossly misrepresented black and brown communities. This worldview effectively says “you can only be safe when you are around other white people who think like you,” and it has revived the worst kinds of anti-Semitic conspiracy theories and convinced 30 percent of America that the “liberal press,” the check on this kind of rampant misinformation, is their enemy.

This is the mainstreaming of white supremacy and fascism, and we can’t even begin to comprehend the downstream effects of this movement.

America has always grappled with these demons, and it is naive to believe that Trump is the cause. He is merely the effect. Yet policy differences aside, we have always had presidents who could, at the very least, tame these demons and curb their worst excesses. Remember, civility in America always starts at the top. Without this, we are now playing constant defense. We are back to explaining to our friends, relatives, and colleagues why Nazis, white supremacists, and white nationalists do not deserve a right to rally publicly. We are back to rationalizing and bartering with people who feel they can openly discriminate – even if they are ignorant of what they are saying and doing. As one of my colleagues at RVA Mag would say, “they are colonizers.” We are back to defending the very notion of anti-fascism from the same generation whose parents fought to free Europe from the Nazi scourge.

I am back to explaining to my relatives who vote Republican that their candidate this midterm, Corey Stewart, stood shoulder-to-shoulder with the very same white supremacists who planned Unite the Right last year. The same people who chanted “blood and soil” and “Jews will not replace us.” Nonetheless, they will still vote Republican. Because the mainstreaming process has convinced them they are under threat. Not from the Nazis or white supremacists who hate them, but from immigrants, communities of color, and the liberal media who are trying to silence them.

This weekend there will be multiple events in both Charlottesville and Washington, DC. The event in DC will be attended by former KKK Grand Wizard, David Duke and Jason Kessler, the organizer of Unite the Right, upping the potential for violent escalation. From the map of the staging areas the DC police are attempting to keep both sides apart. But as we have seen from recent rallies in Portland and Berkeley, the best-laid security plans are only as good as the willingness of people to follow them.

While I will be there in my capacity as a journalist, I will also be there in support of anti-fascists, anti-racists, and those who would deny a platform for ideologies rooted in violence and hatred. I have no other choice. We can no longer pretend that sensible moderation and conversation will somehow derail the mainstreaming process of white supremacy and fascism. Those of us who have the ability to raise attention to this must. Those of us in the media must not hide behind the thin veneer of neutrality any longer. To do so will be to our own eventual detriment.

Former Secretary of State Madeleine Albright, in a new book titled “Fascism: A Warning,” summed up the state of play in modern America. “[Trump] convinced enough voters in the right states that he was a teller of blunt truths, a masterful negotiator, and an effective champion of American interests. That he is none of those things should disturb our sleep, but there is a larger cause for unease. Trump is the first anti-democratic president in modern U.S. history.”

We must rally. We must resist. That is what we must remember one year later.