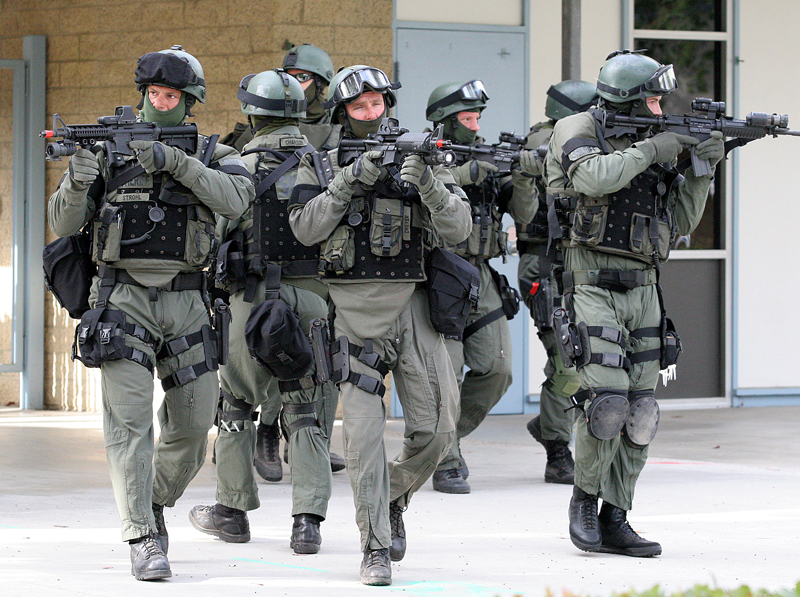 I’m teaching a class in Social Movements this semester. This has proven to be good timing, in the sense that neo-Nazis were just running amok down the street in Charlottesville – how helpful! (Uh, actually no. Murdering Nazis are never “good;” let’s just say it’s been instructive.) On the first day of class we talked a little about what had happened over the summer, and I wanted students to notice something that had surprised me.

The C’ville rally was violent, for sure. But the surprise? It wasn’t the police who were violent.

Empirically speaking, it is in fact the police who most often cause violence during protests. Mainstream media accounts of social movements almost always miss this point; reporters and editors tell the story of how protests “became violent,” or even apply the “violent” label to the protesters themselves. But it is almost always law enforcement that is the source of violence. Bull Connor, the head of law enforcement in Birmingham during the early 1960s, is often held up as an example of police forces driven to brutal repression by a twisted individual. But Connor represents the norm, not an outlier.

This probably shouldn’t be all that surprising. Police departments, as institutions, are organized to maintain order. (British Law Professor Robert Reiner, among others, has argued that modern police departments actually developed in the 19th and 20th century in response to protest politics.) Law enforcement and state authorities are not interested in democratic participation, and often directly oppose such participation if they perceive it as involving rule-breaking.

But this is what social movement activism is, by its very nature, about. Movements seek to obtain political goals by disrupting the normal flow of business. From strikes or boycotts to marches and “occupation” of public or private spaces, movement actors are trying to draw attention from the public and provoke action from authorities. They do this by breaking the rules of “normal politics” -– most people don’t spend their Tuesdays walking down public streets banging drums and waving banners -– and sometimes by breaking laws.

In general, authorities respond to such political disruption in two ways. The first is “co-optation” – they try to acknowledge and blunt movement energy. They invite movement actors to meetings, or even incorporate movement leaders into institutional structures like committees or commissions. (That’s the “co-opt” part.) Activists may feel like they have a voice and can now change things. And hey: sometimes they do! But movement action dissipates.

The other response — and one that is much more immediate in its simplicity — is repression, often through the use of express brutality and violence. This kind of response is pretty obvious in more restrictive regimes: the tanks in China’s Tiananmen Square, security forces likely setting fires in activist camps in Myanmar. But it’s a pretty standard response domestically as well. From early labor activists killed by bullets from national guardsmen, to civil rights protestors in the 1960s being attacked by dogs, to today’s Dakota pipeline protestors being blasted by water cannons in freezing temperatures, there’s a long history of state violence in response to movement activism.

And so it was strange for me to view the eyewitness accounts from C’Ville, where it turns out most of the violence occurred in front of police, but was not perpetrated by the officers themselves. Instead, the police seemed focused on staying as far above the fray as possible, to the detriment of some who were brutally assaulted. It might have required a protest in a famously progressive city, but for once we saw political activists suffer from not enough police action.

Here in Richmond, the C’ville experiences are very much on people’s minds as a confederate rally is planned for the Robert E. Lee statue on Monument Avenue this weekend. It’s unclear to me how many Confederates may actually appear; the police seem to be going by the claims of the organizers, who appear to be a trio of self-aggrandizing merchandise vendors more than anything else. But who knows? Based on my own experience taking on the Confederacy, I know there’s an active network of Lost Cause advocates and deluded amateur historians who are ready and willing to defend “states’ rights,” at least online. Maybe some of them, or (worse) the white supremacist groups stirred up by C’ville, may decide to tag along. And many reports indicate counter-protestors from Black Lives Matter and other groups will appear to challenge the Confederates.

No matter who shows up, it is clear that RVA Police Chief Alfred Durham has learned at least one lesson from C’Ville: the police are not going to stand down. In press releases and a series of community meetings this week, the Chief and his officers have stressed a zero tolerance for any threatening behavior. (Of course, thanks to VA’s generous open-carry laws, rally attendees are not allowed to bring bats or nunchucks but are welcome to bring their assault rifles.)

On one hand, Durham’s approach is a good thing: the RVA police won’t stand idly by while neo-Nazis fire into crowds or beat a counter-protestor with metal bars. But as a scholar of social movements, I can’t help but be worried about an increased police presence. More authorities don’t always mean more safety. In fact, over the history of movement politics, it means the exact opposite. We’ll see this weekend.

But just a word of warning: if you brave Monument Avenue, don’t just keep an eye out for protestors.

*This article was originally published in RVA Politics and can be found here.

Cover photo by Voice of Detroit