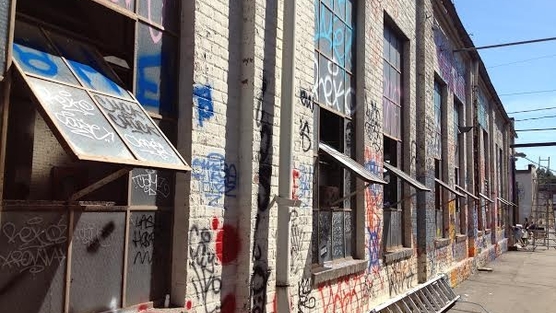 A petition hoping to sway Mayor Dwight Jones into turning the GRTC Bus Depot on Main St. (current home of the RVA Street Art Fest) into a space for Richmond’s creative class has started to gain steam.

A petition hoping to sway Mayor Dwight Jones into turning the GRTC Bus Depot on Main St. (current home of the RVA Street Art Fest) into a space for Richmond’s creative class has started to gain steam.

“It is time to focus on our creative class and build a front door to RVA where creative technologists, makers and civic innovators can build things in tinker garages, enjoy an indoor farmers market, have access to tools from a community tool shed, work out of state of the art coworking space with an indoor climbing wall, invite our friends to stay in a boutique hotel, and be part of a true sharing economy.” states the petition which has over 200 signatures so far.

The bus depot is in a weird limbo as is. While the RVA Street Art fest was a wild success, the mugging of a security guard led to the permanent closure of the space to the public.

There’s also a bunch of environmentally hazardous waste (oil and other byproducts from repairing city buses) buried under the facility which has to be removed before any construction can take place. This removal can’t happen until around summer 2016.

The entire lot is also privately owned by GRTC. The city gives substantial funds to GRTC for the space, but in the end, it’s the GRTC board who will make the call on who gets to purchase the land.

The city does have people on the GRTC board, so, in theory, Jones could ask those board members to prefer a “creative class village” over other development projects, but we are getting into all kinds of theoreticals here.

Sign the petition if you are so inclined; voice your support for the expansion of a arts/tech hub on Main Street… at least it’s not a new baseball stadium, right?