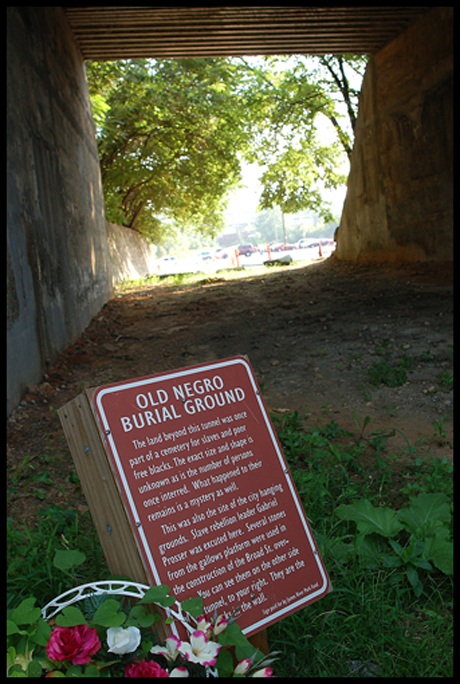 I have been pepper sprayed and clubbed in the afternoon. I have been jailed in the evening. But it took an official from VCU to threaten me with arrest before 9:00 in the morning.

I have been pepper sprayed and clubbed in the afternoon. I have been jailed in the evening. But it took an official from VCU to threaten me with arrest before 9:00 in the morning.

I had shown up on the 15th Street bridge in downtown Richmond to document a press conference. It was being held to bring public attention to VCU’s paving over the slave burial ground adjacent to Broad Street.

This is an issue that Richmond activists had done work on in the past, and I had covered their efforts with a segment on my radio show the previous year.

I decided that before the press conference started I ought to take some photographs of the area for this article, and began doing so by locating the official marker that already existed at the site. To find this marker, one has to make their way around the enormous VCU parking site – still marked off by orange cones and tape – and under the bridge. There, small and unassuming, the history of the site is told in less than 10 sentences.

In closeup, the marker tells of Gabriel Prosser’s hanging at this site. One of the few truly heroic men to ever live in the Richmond area, Gabriel was an enslaved blacksmith who plotted a rebellion in 1800. The night it was to occur, a torrential downpour forced the rebels to postpone their insurrection. In a supreme irony, two other slaves warned their master of the plot, and when Gabriel escaped downriver to Norfolk, another slave spotted and turned him in for the reward (which he received less than half of).

I stood quietly before the pile of rocks where the gallows once stood, set into the hill that rises to Broad Street. All that remained to mark the spot was an altar left by some unknown person, marred and faded by the weather.

Standing in this same spot, one can turn around to face the other direction, and stretching out from the very bottom of this incline there is nothing but empty asphalt. A dead, flat ground, soon to be filled by the cars and trucks of daily commuters.

VCU purchased this land from an Ohio company, and is in the process of paving over the bodies of the slaves and the history of Richmond that lies beneath it. With few exceptions, the reports that would come out of the major news outlets after the demonstration were 4-paragraph carbon copies of an AP release:

Virginia Commonwealth University’s resurfacing of a parking lot is drawing protests from groups who claim the project desecrates a centuries-old burial ground for slaves and freed blacks.
About 20 representatives of the Virginia State Conference of the NAACP and other organizations criticized the paving project Tuesday during a news conference near the site.

Last year, a state archaeologist concluded in a report that Interstate 95 was built over the main portion of the burial grounds but a portion was under the parking lot.

VCU spokeswoman Pam Lepley says that, according to the report, the area being resurfaced probably wasn’t involved in the burial grounds.

The interesting thing to note about the report mentioned in this AP release is that it is based on a map drafted in the late 17th century. To determine the size and exact location of the burial ground, the state archaeologist literally drew a box around the outer edges of the words that marked the location on the two-centuries-old map. This, of course, is a perfectly maladaptive way to go about discovering anything about the history of the location, it’s actual size or it’s meaning to Richmond’s history, but perfectly suited to maximizing modern urban development in the area without interference. (Somehow I don’t think the city would permit me to purchase and pave a portion of Hollywood Cemetery because the specific area was not directly under the name on city maps.)

Up on the bridge, people were gathering to bring awareness to this. Signs and banners were visible to the rush hour traffic.

It was about this time that VCU’s official for the site approached me. I smiled a hello as he walked closer, but it soon became clear he was on the offensive.

That last bit was referring to the small white building at the corner of the lot, which VCU does not own, where I had climbed a few steps of a metal ladder to get the black and white image above. Every step I had taken had been on city property, being careful to walk the long way around the entire parking area, but it was clear that VCU (or at least this representative of VCU) was under the impression that the school owned every last inch surrounding the burial grounds.

On cue, a police car turned down the road. Whether it had been summoned by the official, I do not know.

It was then that a new facet of this burial ground issue became clear to me – the privatization of history. I was being told that I could not even be present to perceive the markers that the state had placed to commemorate its past. I could not freely document the site. If there had been any part of me that was unsure how I felt about the issue before that point, it was then gone.

Both the city and VCU must take into account the obviously flawed methods used to determine the location and size of this site. They must realize the actual and potential historical significance. And finally, they must strive to determine how each and every person who comprises these institutions would feel if the burial site of their families, their relatives, their descendants was covered in asphalt, flattened with steamrollers and made into a daytime, open-air garage. I dare say none of them would stand for it.

Unfortunately, the people of Richmond must find a way to help VCU look beyond the $40,000 of annual profit the lot will generate, to the history of the people who built Richmond in the first place through their blood, sweat and oppression.