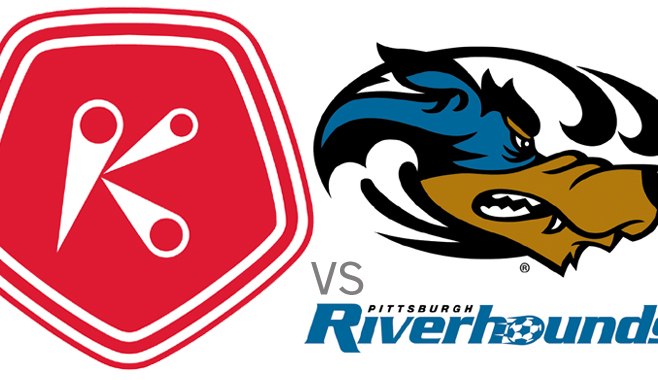 The Richmond Kickers (4-4-4) return to City Stadium this Saturday, June 11 to host a USA & RVA doubleheader.

The Richmond Kickers (4-4-4) return to City Stadium this Saturday, June 11 to host a USA & RVA doubleheader.

The USA & RVA Festival starts at 3:30 p.m. with live music by Pump House, interactive fan zone, RVA food trucks and over 20 craft beers and ciders on tap before the Kickers battle the Pittsburgh Riverhounds (1-6-3) at 5:00 p.m. Then, the USA’s Copa America group stage finale versus Paraguay will be shown on the largest outdoor high-definition LED screens in RVA on the main concourse at 7:00 p.m. After the match, the party will continue in Carytown at the official post-game party spot, Citizen Burger Bar.

A special USA and Kickers scarf package is on sale now at RichmondKickers.com and entry to the viewing party is free after 6:30 p.m.

The Kickers return to City Stadium following a grueling two-game road trip last week. The club’s road woes continued following a dramatic mid-week U.S. Open Cup Third Round match against the Fort Lauderdale Strikers. Allowing a goal in the 2nd minute, the Kickers rallied for the equalizer when Yudai Imura converted Anthony Grant’s perfect through ball before the break. Inclement weather delayed the match for 30 minutes in the second half and neither team could break the stalemate following the restart, forcing overtime and a penalty kick shootout.

Kickers goalkeeper Charlie Horton saved two of the Strikers’ penalties but the Kickers could not convert any of their four attempts to hand the Strikers the Fourth Round berth.
Three days later, the Kickers salvaged a much-needed point on the road through a 1-1 draw against FC Cincinnati. After conceding a goal within the first 15 minutes, the Kickers waited until the final minute of second half stoppage time to level the score. Forward Jason Yeisley intercepted the ball in the midfield and slotted it through the defense to Brian Ownby deep on the right wing. Ownby’s lofted cross into the box found Hugh Roberts who heroically volleyed home the last-gasp equalizer.

Pittsburgh enters Saturday’s match under the guidance of new head coach, Dave Brandt. Looking to return to winning ways after a two-game slide, the Riverhounds most recently dropped a 2-1 loss against Charleston last week. Carrying a two-goal deficit into the halftime break, Pittsburgh pulled a goal back minutes after the restart when Rob Vincent converted a cross from Stephen Okai but could not find the equalizer despite outshooting the visitors 16-7.

The Kickers and the Riverhounds close out the two game, home and away series at Highmark Stadium on Thursday, July 14.

Kickers: Defender Hugh Roberts (#8) earned USL Team of the Week honors for the second time this season after his last-second equalizer against FC Cincinnati salvaged a point for the Kickers on the road last week. The native of Olney, MD has amassed over 3,000 minutes in his first two professional seasons after being discovered at the Kickers 2014 pro tryouts. Brian Ownby (#22) leads the Kickers with three goals and adding his third assist last weekend on the game-tying goal against FC Cincinnati. The homegrown midfielder out of Deep Run High School and University of Virginia tallied five goals and four assists in 14 appearances in 2015 before a midseason injury left him sidelined for nine months. Forward Anthony Grant (#9) broke into the starting lineup last Saturday in Cincinnati after contributing his first assist in a Kickers uniform against FC Montreal one week earlier and adding a second assist against Fort Lauderdale four days later. He joined the Kickers late last year after earning the PDL Most Valuable Player award following the 2015 season that saw him lead the league with 12 regular season goals.

Riverhounds: Corey Hertzog (#11) currently ranks second on the team with two goals, including the game-winning tally against Toronto FC II last month. Signing with the Riverhounds prior to the 2016 season, the 6’0” forward brings extensive USL and MLS experience to Pittsburgh, after stints with New York Red Bulls, Columbus Crew, Vancouver Whitecaps, Orlando City and Wilmington Hammerheads. On loan from the club’s official MLS affiliate, Columbus Crew, midfielder Marshall Hollingsworth (#25) has made six appearances with the Riverhounds this season. Selected by Columbus in the 2016 MLS SuperDraft, the 22-year old made 92 appearances and tallied 45 goals at Wheaton College. In his fourth season in Pittsburgh, Kevin Kerr (#10) has made eight appearances and contributed one assist after finishing the 2015 season second on the team with 10 goals and 29 points. Overall, the English midfielder has amassed 15 goals and 11 assists in a Riverhounds uniform, and previously spent time in Germany and The Netherlands.

USA Outdoor Viewing Party Saturday
After the Richmond Kickers game Saturday, fans are encouraged to cheer on Team USA when they take on Paraguay in their Copa America Centenario group stage finale, on the largest outdoor LED screens in RVA at City Stadium at 7:00 p.m. Following the global tradition of outdoor viewing parties, City Stadium will serve as RVA’s official fan destination as the only CONCACAF and CONMEBOL-approved and licensed outdoor viewing event in Richmond. The USA & RVA Festival will celebrate the highly-anticipated Copa America Centenario, a once-in-a-lifetime event, which honors 100 years of the Copa America tournament.