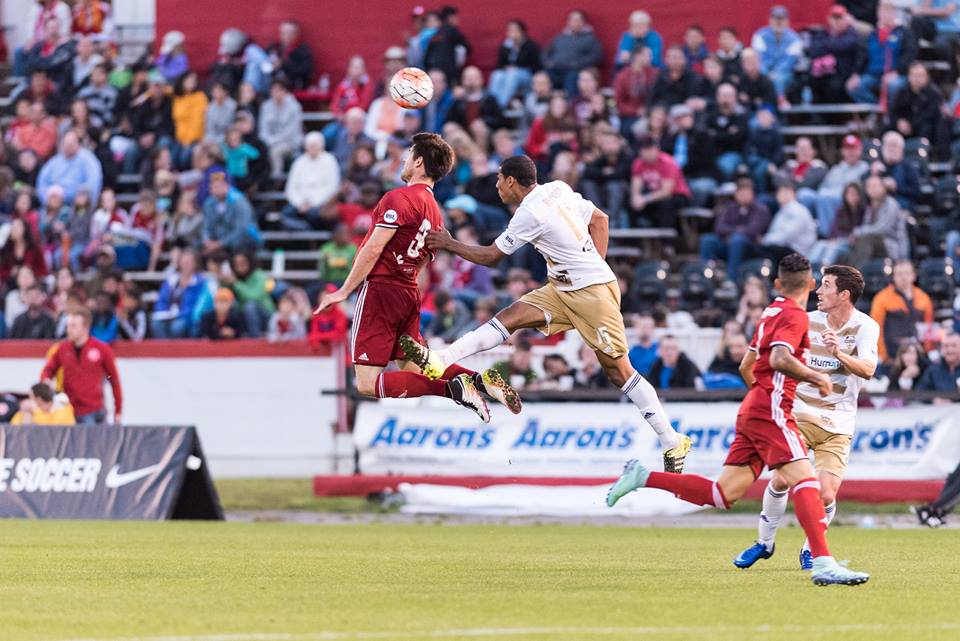 The Richmond Kickers and Louisville City FC were unable to find the back of the net as the sides drew 0-0 at City Stadium on Saturday night.

The Richmond Kickers and Louisville City FC were unable to find the back of the net as the sides drew 0-0 at City Stadium on Saturday night. The Kickers were forced to play with 10 men after Alex Lee was shown a second yellow card in the second half, but Louisville were unable to capitalize as Charlie Horton and the Kickers defense recorded their fourth straight home shutout in league play.

Kickers dominated the early stages of the first half but were unable to create any real chances early in the game. Louisville City FC created the first real opportunity of the game in 21st minute. A cross following a cleared corner found its way to the back post where Louisville defender, Ben Newnam, tried to direct the ball towards goal but Richmond goalie, Charlie Horton, was able to collect the ball.

Brian Ownby created the best chance of the half in the 27th minute. The Richmond forward collected the ball at the top of the box, faked a pass to the left and fired a shot towards goal, forcing Louisville keeper, Greg Ranjitsighn, to parry the ball over his goal and out for a Kickers’ corner.

Ownby continued to create problems for the Louisville defense. He would make a dangerous run down the left wing causing Louisville defender, Sean Reynolds, to draw the foul and a yellow card. From the free kick, Lucas Paulini, curled the ball over the wall but was unable to hit the target as it went just over the Louisville goal.

Louisville created a dangerous opportunity from a counter attack late in the first half. Tyler Newnam drove down the left wing and crossed the ball into the box finding Louisville’s top scorer, Chandler Hoffman, driving into the box but his effort sailed high of the Kickers’ goal.

Kickers came inches away from the opening goal in the 52nd minute. Luis Fernando found Brian Ownby in space on the right wing, who crossed the ball into the box looking for Jason Yeisley, but the Louisville keeper was able to get to the ball just before the striker could get the clinical touch.

In the 53rd minute the Kickers endured a setback. After an off the ball foul, Richmond defender, Alex Lee, was shown his second yellow card, forcing the Kickers to play with 10 men for the remainder of the game.

Louisville City FC would push for the opener for the remaining 35 minutes as they were hoping to keep the pace on top of the USL Eastern Conference, but the Richmond Kickers defense showed resilience. The Kickers dealt with the pressure and Louisville were unable to create any real threats to Charlie Horton’s goal, as he recorded two saves on the night and his second clean sheet in as many games.

With the draw, the Kickers remain undefeated at home this season and have recorded 15 points in 10 games in the USL.

The Richmond Kickers will be back at City Stadium on Saturday, May 28 at 7pm when they host FC Montréal. Tickets are on sale now at RichmondKickers.com.