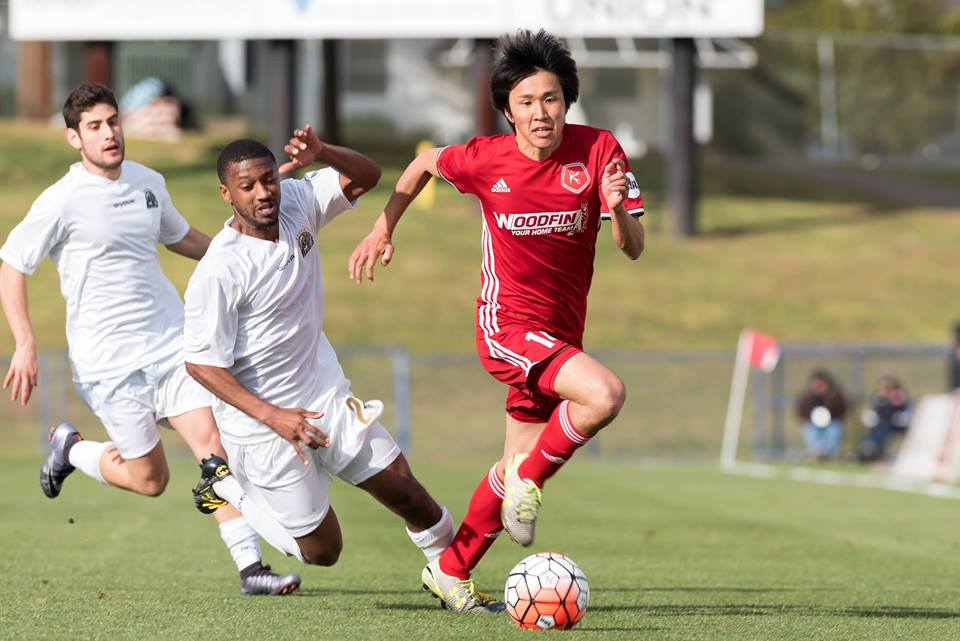 The Richmond Kickers remained undefeated in the 2016 season as they recorded a 1-0 victory over the 2015 USL regular season and playoff champions, Rochester Rhinos, and moved int

The Richmond Kickers remained undefeated in the 2016 season as they recorded a 1-0 victory over the 2015 USL regular season and playoff champions, Rochester Rhinos, and moved into first place in the USL Eastern Conference. The Kickers scored the only goal through Yudai Imura in the 61st minute as the Kickers hosted the Rhinos on Saturday April 9 at City Stadium.

The first half of the windy affair saw both teams share the ball. Neither team was able to create any clear goal scoring opportunities in the first half.

In the 11th minute Rochester had the first chance of the game, after good work down the left wing, the cross was put dangerously into the box before Richmond goalie, Ryan Taylor, was able to parry the ball away from any danger.

Then in the 24th minute, the Kickers had their best chance of the first half. Forward, Brian Ownby was able to create space on the left side of the box before crossing the ball into the six-yard box finding Jacob Yeisley’s head, but he was unable to direct the ball towards goal, before the Rochester defense was able to clear from the box.

The second half saw the Kickers grow into the game and dominated possession in the beginning stages of the half.

In the 53rd minute Kickers almost capitalized on the good pressure when the Rochester defender, Jordan McCrary, slipped on the ball and Brian Ownby almost pounced on the chance before Rochester goalie, Adam Grinnis, was able to come off his line and collect the ball at the top of the box.

Rochester then forced the first real opportunity of the game in the 56th minute. Midfielder Marcos Ugarte then found himself in space on the right side of the field before finding Kenardo Forbes at the top of the arch, who was able to cut the ball onto his left foot and fire towards goal forcing Richmond goalie, Ryan Taylor, to tip the ball over the bar for a Rochester corner.

The Richmond Kickers then made the breakthrough in the 61st minute. New signing, Travis Pittman, took a free-kick from just inside the Kickers’ own half into the Rochester box causing the goalkeeper to come off his line to clear, only to be contested by Jacob Yeisley, causing him punch the ball only as far as Yudai Imura at the top of the box, who was able to strike the ball down the middle of the net to give the Kickers the lead. That goal was Imura’s second goal and fifth point of the season as he scored one and assisted another in the Kickers’ 3-1 home opener versus Harrisburg.

Rochester almost equalized in the 77th minute when Marcos Ugarte found the ball at his feet just outside the six-yard box resulting in a shot that just sailed past Ryan Taylor’s far post.

The last ten minutes saw the Kickers see out the game with Rochester searching for the equalizer. The Rhinos were able to create chances but unable to test Ryan Taylor as the Kickers defense was able to handle the pressure as they defended two set pieces in late stoppage time.

The Richmond Kickers will be back at City Stadium on Saturday, April 30 versus Toronto FC II Tickets are on sale now at RichmondKickers.com.